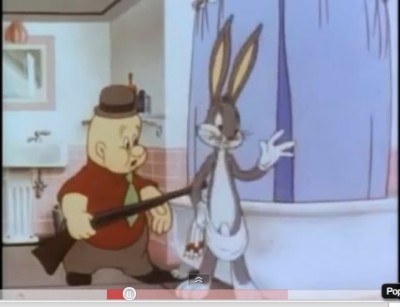 This one was part of a series made for the army by the Looney Tunes guys along with Dr. Seuss, and you can jump to the three minute mark or so if you are too impatient to watch the rest of the hilariously cheesy propaganda:

What surprises me most is that these were included in DVDs like the Looney Tunes Golden Collections. Sure, they were made for collectors, but you know plenty of children got their hands on the DVDs and stumbled across these.
Posted by Salamander Sam in Chicago on 02/26/11 at 02:37 PM

Well-spotted, Salamander Sam!
Posted by Paul on 02/26/11 at 03:04 PM
D'oh! I trusted IMDB way too much!
Posted by Paul on 02/26/11 at 10:01 PM
SAW--yes! Very true! My faith in IMDB is restored. Thanks!
Posted by Paul on 02/27/11 at 12:19 PM
I agree with Anoxos. Being an animator myself, you wouldn't believe how much a character model can vary from frame to frame, and while the white underbelly normally stops at his stomach, there are plenty of examples in the very same cartoon where that isn't the case. Also, the scene in question is more like 4-6 frames, not one, and they would never purposely attempt that kind of gag in a real short. After all, they would have to completely re shoot that scene if they were caught, and that is much more trouble than it is worth. And even if they were going for broke, that's not the kind of gag they would do. When sneaking something in they tend to be very subtle (like in the Betty Boop example) or very obvious (Like in one Tweety short when a character said "If the Hays Office would only let me, I'd give him the bird, all right!"). They would never do anything this ambiguous. However, in the early days of the Golden Age it wasn't uncommon for characters to "lose" their clothes (look at characters like Donald Duck and Winnie the Pooh who wear shirts but not pants). For example, look at the 4:15 mark on this short, which, while much more obvious than Bugs's supposed wardrobe malfunction, isn't necessarily risqué (though it certainly wouldn't have gotten past the Hays Office if it was made a few years later):

But perhaps most importantly, anyone even remotely familiar with Bugs Bunny knows his legs aren't that short. It's much more likely that they drew him slightly off model than completely out of proportion. This is just an innocent scene that people started to pay attention to when the internet came around and told them it was terrible.
Posted by Salamander Sam in Chicago on 02/27/11 at 06:05 PM
i'm betting some animator did this to amuse himself and it never got caught till it was out so the tub story was manufactured to cover it. either way it is pretty funny!
Posted by Patty in Ohio, USA on 02/28/11 at 12:30 AM
Commenting is not available in this channel entry.