March 1985: Sgt. Joseph Mitlof of the NYPD realized that the 30 cups of coffee a day he was drinking might have been contributing to his anxiety problems. In fact, he was suffering from "caffeinism." 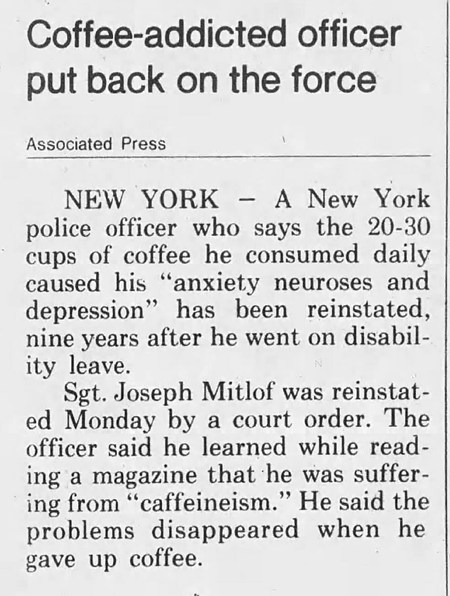 I had never heard of such a thing as "caffeinism," but it turns out the term is over 100 years old. A 1979 article in the Journal of Applied Behavior Analysis offered the following definition:


Caffeinism describes a set of behavioral and physiological symptoms caused by the excessive consumption of caffeine-containing substances. The symptoms include nervous irritability, tremulousness, occasional muscle twitchings, insomnia, sensory disturbances, tachypnea (an abnormally rapid rate of breathing), palpitations, flushing, arrhythmias (an alteration or abnormality of normal cardiac rhythm), diureses, and gastrointestinal disturbances. Individuals suffering from caffeinism are sometimes misdiagnosed as anxiety neurotics because of the similarity of the symptoms. The deleterious effects of caffeine on humans also may include increasing the possibility of coronary heart disease in susceptible persons, promoting the progress of atherosclerosis and affecting chromosomal structure or action.

I only drink one cup of coffee a day, first thing in the morning. I think I'm good.