1947: Once Minerva Elagan had accepted a pineapple soda from Rev James Chambers (Chalmers?), she was under his influence forever. 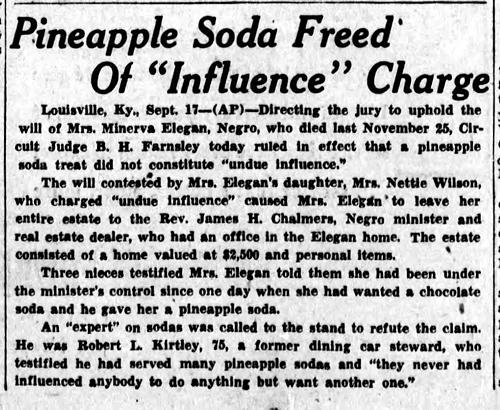 
Comments
Weird as this is, my favourite part of it is the final bit of Mr. Kirtley's statement.
Posted by Richard Bos on 04/15/16 at 01:32 PM
I wonder if it's too late to try this on some of those girls I had a crush on in high school?

There is never enough information in these articles, is there?
Posted by puptentacle on 04/15/16 at 03:36 PM
The daughter might have had a point, depending on what the good Reverend put in the soda besides pineapple.
Posted by Patty in Ohio, USA on 04/15/16 at 04:44 PM
I'm still trying to figure out how you "ply" someone. Does it just apply to sodas? Steak and lobster? Is is leftover from Middle English? Perhaps the derivation of the word "plywood" is in here somewhere.
Posted by Virtual on 04/15/16 at 05:15 PM
@Virtual: I went over to the Online Etymology Dictionary and found that it's a bastardization of "applien" from the 14th century. You know, sort'a like nobody on TV can say the word ambulance anymore it just HAS to be an "AMBO" because time is so short!
(Ok, my good deed for the day is done so the gloves are OFF!)

Way, way back in the mid 60's when I was slingin' soda (pop) we still carried several 'flavors'. The plant wouldn't run these flavors but occasionally and then only in the summer. We had one customer that lived on strawberry and he's stock up for the winter so the charge is not, totally, without foundation. As we never sold pineapple I can't attest to any magical powers it may, or may not, have.

Fun Fact: Mountain Dew (which I helped introduce) was NOT considered a 'flavor' regardless of how sweat it was.

Funner Fact: I would like to dispel any and all rumors to the effect that the employees of the Pepsi plant were made to line up each AM and pee into the open Dew cans to create that yellowish drink.
Posted by Expat47 in Athens, Greece on 04/16/16 at 12:01 AM