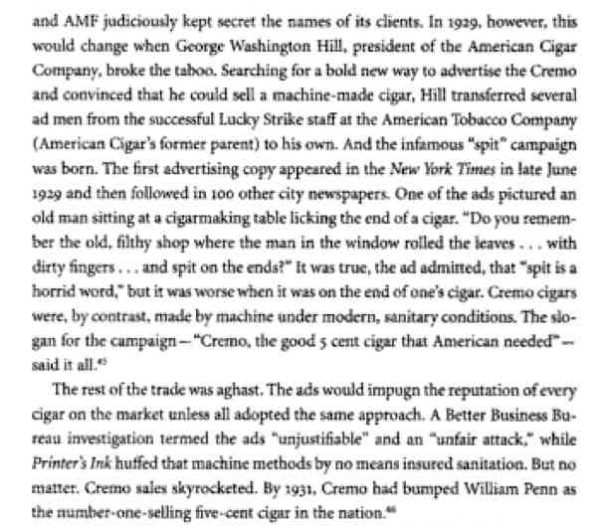 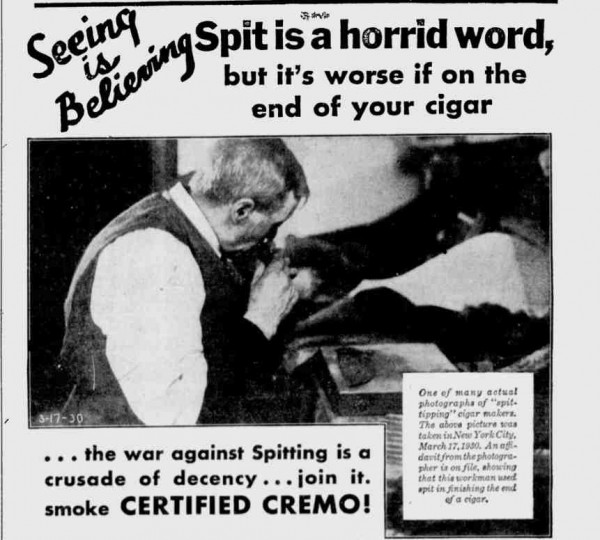 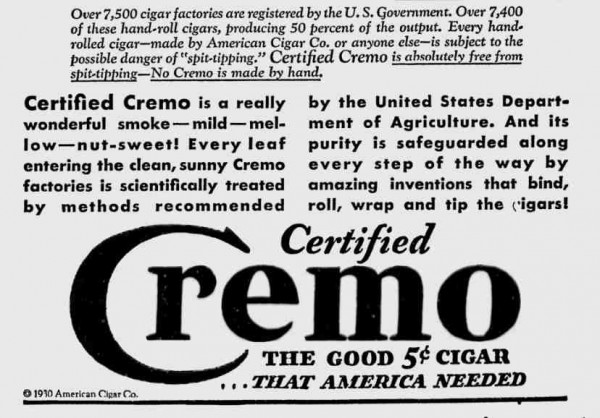 
Comments
Won the battle but lost the war.
Posted by Patty in Ohio, USA on 04/18/12 at 09:26 AM
Spit on the end of a cigar? That's why you have a ring cutter to trim the end. The heat of burning will kill any little beasties left behind on the wrapper.

I just wish that one could still find a good cigar for 5 cents. Finished tobacco products are so high in price because of all the taxes the do-gooders have tacked on here in the States. I checked the price of a box of Havana made cigars while on my way out of Paris last month and the price was about the same as I paid some twenty five years ago.
Posted by KDP on 04/18/12 at 10:02 AM

I remember Wm. Penns but never heard of Cremos and I started on cigars back in the early 60's.

It's pretty rich when tobacco purveyors start pointing at the risks of spit on competitors' products. Then you remember that the product kills half of all consumers when used as recommended.
Posted by Harvey on 04/18/12 at 09:14 PM
@Harvey - agree! Sucking on a tube of what looks and smells like burning dog feces that will create cancerous plaques in your mouth and you are worried about a little dried spit on the end of it??!! And never mind that the smoke they blow out is full of still-moist microscopic saliva particles full of the germs they were so afraid of in the first place. I have no problems with people smoking ---- as long as when I drink I can blow my beverage out on them standing next to me the way they blow their smoke on me. Or if I can spray air freshener on them to match the stink of the smoke. They don't seem to like that though. Hmmmm....
Posted by ScoutC on 04/20/12 at 06:20 PM
Commenting is not available in this channel entry.