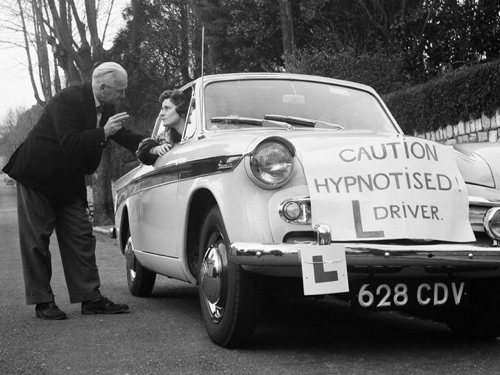 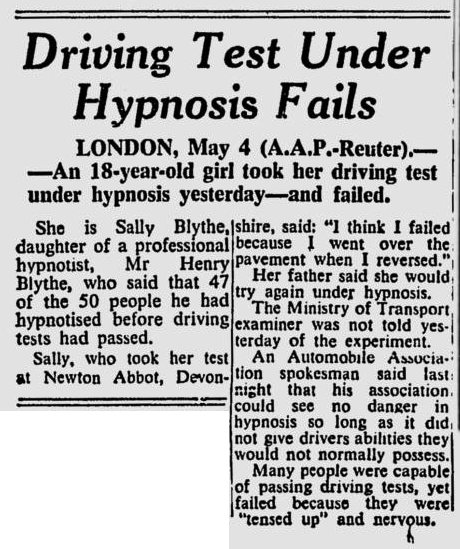 A guy I knew got his license at 14, drove without incident until he went in the service where he learned to fly copters. After he got out and moved to a new state, he had to take the driving test. Flunked four times in a row because the lib driving instructor hated GIs. State refused to let him take the test with an unbiased instructor.
Posted by Phideaux on 05/03/14 at 10:21 AM

So, relaxing with a couple of martinis before taking the test isn't the correct way to go?

The part it sounds as though she flunked is "turning in the road, using the forward and reverse gears", which is one of the harder parts of the test. It's commonly referred to as the three-point turn, although there's no requirement for only using three points; five is acceptable as well. 17, and you're going to have to do some explaining. Touching the kerb at any point in the maneuver is a fail. The toughest part is the hill start, where you must move off from rest on an uphill slope, without rolling backwards. That involves coordinating all four limbs: gas, clutch, handbrake and steering wheel. It's easy after the first couple of hundred times...
Posted by TheCannyScot in Atlanta, GA on 05/03/14 at 11:46 AM

When I was in high school there was a scandal at the local DMV. Any ´non-white´that took their test with `Mr. X´ failed beacuse in his own words(defense) he said (at his hearing) that "Darkies aren´t smart enough to know how to drive" The state replaced him with an unbiased instructor
Posted by F.U.D. on 05/03/14 at 11:56 AM
Most of the cars over here still have manual transmissions but, if you want to spend the €€s you can get a 'no roll backwards on a hill' kit added.

I grew up on a farm and could double clutch the old grain truck when I was about 10. So I was embarassed when I failed on my first try. :red:

I'm kinda proud that my 22 year old truck does not have a dent. It is a manual.
Posted by BMN on 05/03/14 at 08:12 PM
I drove my instructor over to the donut shop. Had a donut with him then drove back to the high school.