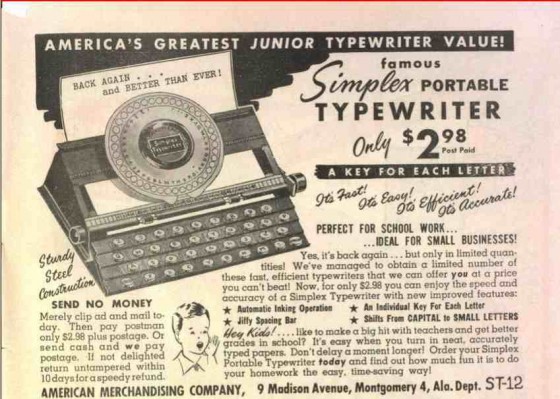 Comments
I'm dusting off some serious brain cells here but I think I had something (or at least played with one) like this back in the annals of prehistory.

Personally, I have a fondness for old mechanical typewriters. As the lone male in a high school typewriter training class, I had no idea that that training would ease my entry to a career with computing equipment.

I have two very old, wood cased portable 19th century machines at home. One is a very conventional multiple arm machine and the other uses a rotary action cylinder very much like the type ball mechanism used by IBM for their Selectric line. I would love to have a Selectric - they were the Cadillac typewriter of the day.
Posted by KDP on 07/30/14 at 11:34 AM

Pretty cool toy.
Posted by Patty in Ohio, USA on 07/30/14 at 07:43 PM
I read somewhere that one of these got smuggled into a POW camp in Germany. The POWs modified the typeface to match that on German documents.

It takes absolutely forever to write a letter with one of these!

@KDP -- I had three IBM Selectrics when they first came out. Why three? One in the shop, one to use, and one on the shelf for when the one I was using went haywire before the one in the shop got returned. When their warranties expired, I used them until they died (about two months) and switched back to Smith-Coronas.

I heard that later models were much better, but I wasn't willing to take a chance.
Posted by Phideaux on 07/30/14 at 09:04 PM
Are you sure that wasn't an episode of Hogan's Heroes Phideaux? 😉
Posted by Patty in Ohio, USA on 07/30/14 at 11:29 PM
You trying to bust my bubble, Patty? Now you're trying to tell us that Hogan's Heroes wasn't docudrama steeped in fact and history? You're denying the whole 2ed war or just the German POW camps?
Posted by Expat47 in Athens, Greece on 07/31/14 at 12:00 AM
@patty -- They didn't have to resort to such things; they just had Hilda type up what they needed on official stationery.
Posted by Phideaux on 07/31/14 at 01:11 AM
Ideal for small businesses? Maybe a lemonade stand.
Posted by ges on 07/31/14 at 10:13 AM
I never had or used a Selectric, but for pseudo-professional reasons I still have one of those wobbly letter balls lying around here. Letter Gothic, from the look of it.
Posted by Richard Bos on 07/31/14 at 04:14 PM