It never really dawned on me that fans would come up with recipes to accompany these movies, but in retrospect, it only makes sense, and the fad appears to go way back, as seen in this 1983 instance below. Will they issue a new recipe for the newest trailer? 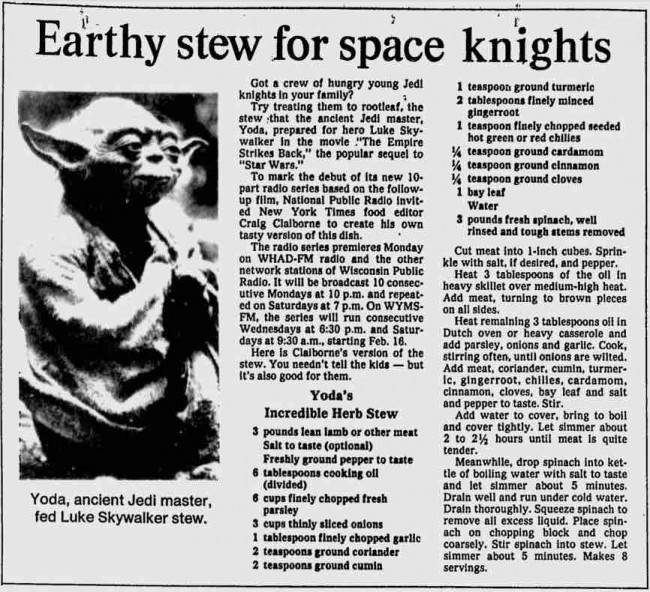 
Comments
I've enjoyed Star Wars ever since the 1st one & I've enjoyed them a lot but.... seriously enough is enough.

This stew too much work is!
Posted by Bill the Splut on 04/08/16 at 07:43 PM
@ViC: You're right. Clark didn't have much (anything?) to do with the movie but I finished the book the AM before seeing the movie and they're firmly linked in my memory as the movie was just a visualization of the printed word.
Posted by Expat47 in Athens, Greece on 04/08/16 at 11:09 PM
@Bill: This stew, too much work it is! Aware of syntax one must be!
Posted by Leif-Eric Rosenbdal on 04/09/16 at 05:35 AM
With Alex, I agree; the stew should have been vegetarian. Also, a rootleaf without root? I saw Yoda's stew more like an African Mafe; root veggies, leaf veggies, peanut butter, spices and remove the snake, it's not an ingredient, it's the household pet. Serve on rice or whatever cereal was popular in the area.
Posted by Yudith on 04/09/16 at 08:06 AM
@Expat, I saw the 2001 movie several times first. Reading the book later, I became aware of the power of the Kubrik Jedi. Book of the Star Wars, BMN?? Strange an item how that is.
Posted by Virtual on 04/09/16 at 03:28 PM
It has been 40 years. The book was not called Star Wars, but on the back cover was the 'Soon to be in theaters near you'. I don't remember the name or the author. I saw the movie a few months later on it's first release.

My favorite version of the Star Wars book is the one by Shakespeare. In English, alas; I can't read it in the original Klingon.