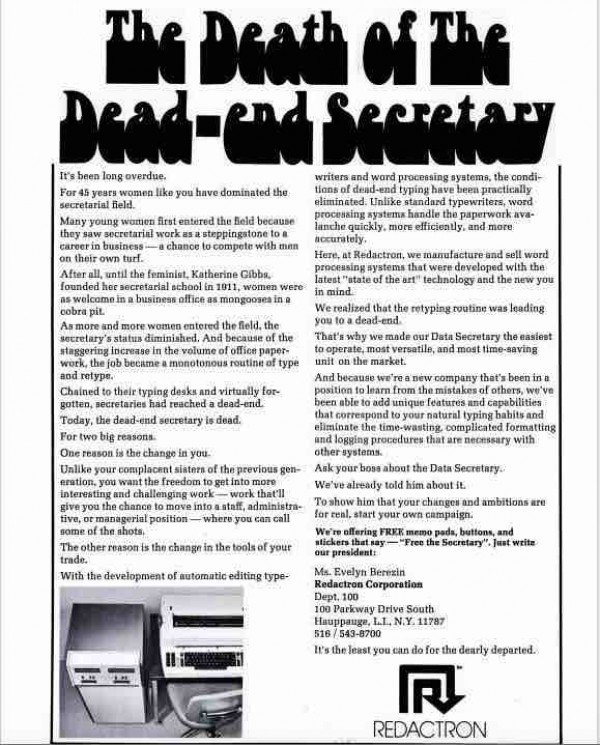 
Comments
There was a ton of money made on these dedicated machines. But, wait, there's MORE!!! This hoax of needing a dedicated piece of computational machinery to preform certain tasks is more alive today than ever! The next time you go to any medical office keep an eye on the equipment and pay attention to what the computer is actually doing! Nine times out of ten it's some mundane task that your cell phone wouldn't miss a step over. If there's a keyboard attached with all those 'fancy', especially labeled keys keep in mind that any keyboard signal can be captured and translated into almost any task. And, yet, these (usually) simple computers hidden under very technical looking bits of plastic cost like the wind.

But, who cares, right? ObamaCare will start driving down health care costs across the board any day now.
Posted by Expat47 in Athens, Greece on 11/06/15 at 10:11 AM

When I worked for the U.S. Air Force there were a number of idle Wang dedicated word processor machines hanging around the offices. Wang still had a contract and was selling the machines even though the PCs were replacing it.

One day a Wang representative came by for a visit. One colonel told me to be present for evaluation and stated that "some guy was going to come in and show us his Wang."
Posted by KDP on 11/06/15 at 11:30 AM

@Expat47 -- It's really no one's fault medical equipment costs so much -- it's because of what we demand of it. We see the same thing with military equipment.

At one place I worked, we had some old (WWII vintage) machines which we ran only when we needed the parts they were set up for. About once a month, we'd get an order for brass retaining pins for hydraulic cylinder heads. I'd load the automatic feeder of the machine which made them, turn it on, check one, and let it run for a day or two.

In theory, per industry standards, every hour, I should have taken a sample part, measured every dimension, and checked it against six gages. In practice, it got checked only when the feeder needed reloading (about twice a day) -- since it was a Brown&Sharpe with ceramic inserts cutting brass, and the tightest tolerance was +/- 0.010, it could probably have run continuously for a year without needing attention. Making a thousand parts required, at most, about one man-hour. If someone charged you a dollar for one of those pins, you were getting ripped off.

Once in a great while, we'd get an order, for the same pins, from a company which made equipment for NATO. First we had to segregate the material we were going to use and send out samples for metallurgical testing. Then we had to set up a machine (records had to indicate who/when/what for every step of the manufacturing process), and when it was running, every 20th part had to be completely checked, with all measurements recorded, and that part bagged and tagged so someone else could check it later on. We also had to make extra ones to be sent out for destructive testing. It usually worked out to 4 man-hours for 50 parts. And that's just floor-time. I don't know how many hours were spent by clerks and QC when we were done. $5 apiece would have been a bargain-basement price.

Why? If a new pin doesn't seat correctly, you have to drive it out, realign everything, and try a different pin. For a farmer or factory maintenance man, that's a frustrating waste of time and money. For a soldier on the battlefield needing to get the unit working again, fast, it might mean disaster. Whenever people die because of equipment failure, someone seriously wants to know why it happened and whose head has to roll.

I've only had one brush with making something going into a "Life Critical" system. Never again. No price can compensate for the hassles involved.
Posted by Phideaux on 11/06/15 at 08:27 PM
Back in the 70's we got ahold of DOS's specks on men's underdrawers. 57 pages of type to describe EXACTLY FTL Boxers.

Also, while in the Navy I needed a couple of bolts. I went to aircraft supply to get a couple but was told they ran $10 a piece! I begged one with the promise I'd bring it back the next day. That afternoon I went over to ACE hardware on the beach and bought 2 for 5¢. The next AM I took all 3 back to aircraft supply and threw all 3 on the counter and told my buddy to take his. After a couple of days of testing he couldn't tell the difference. Now, if these bolt had been used in the aircraft and not some piece of ground equipment and made of some exotic metal, fine, but they weren't.

At $10 apiece for bolts, I suspect they were X-rayed for flaws in the steel. That's fairly common and is one of the umpity-umpteen tests a crib attendant couldn't possibly perform.

You want to get crazy-expensive, look at things qualified under SUBSAFE. I guess the Navy doesn't want another incident where saving a couple of hundred dollars means losing a multi-million dollar sub with full crew.
Posted by Phideaux on 11/07/15 at 06:45 AM
I agree Phideaux, there are legitimate reasons to spend the extra buck or two but then again there are places where common sense should prevail.

Those bolts were NOT part of any aircraft they were only for the stanchions used to paint & service the birds. No major stress.
Posted by Expat47 in Athens, Greece on 11/07/15 at 11:48 AM
Now about the $300 hammers and hand tools and the $800 toilet seats for the military. Throughout history military suppliers have over priced items. In the signal corps we found that we could go out and buy the exact same vacuum tubes for radios at a fraction of the governmental price locally, and there was no waiting forever to order and get them, 27 forms and multiple copies to work through the glacial supply system. Same for the shear pin's in my army trucks winch.
Posted by Gator Guy on 11/07/15 at 06:04 PM
Perhaps the reason Redactron made a feminist pitch is that the founder, Evelyn Berezin, is a woman.
Posted by ges on 11/07/15 at 09:48 PM
No, ges, back then women did the typing. Well, most of the typing. It's a genetic thing, I think.
Posted by Expat47 in Athens, Greece on 11/08/15 at 12:14 AM
We still work military contracts today. The price you are paying is due to the multitudes of specifications you have to adhere to. Fasteners are standardized for various uses. Just because your operation doesn't need a special bolt, those same bolts may be used in a more stringent requirement and need to be monitored through production better. On the commercial side, there is just as much stress for safety.

BTW Phideaux - You may be infringing on ITAR regulations for publicly posting a link to a military specification. I hope no Chinese are reading this.
Posted by GFnKS on 11/09/15 at 01:36 PM
GFnKs: When we wanted to know when & where our next port of call was we'd ask the hookers that followed the ship. 99/100 they were right!

If it's on the web or in print then it's pretty much common knowledge.
Posted by Expat47 in Athens, Greece on 11/09/15 at 01:49 PM
@GFnks -- I think I'm safe -- this particular recipe doesn't call for weaponized raisins.

What really got to me in making parts for NATO equipment: one reason for metallurgical testing was to check for lead content. The French (reportedly) had insisted on very conservative limits because they didn't want the risk of something bombed/hit by an RPG/otherwise blown up putting lead into the atmosphere as it burned.
Posted by Phideaux on 11/09/15 at 02:06 PM
Redactron, it sounds like a machine Government files are fed into to black out the 'sensitive data'.
Posted by Patty in Ohio, USA on 11/09/15 at 06:41 PM
@Patty: They were touting their error-prone hard drives as a feature -- type in everything, it only gives part of it back because the rest is corrupted data.
Posted by Phideaux on 11/09/15 at 11:19 PM
Commenting is not available in this channel entry.