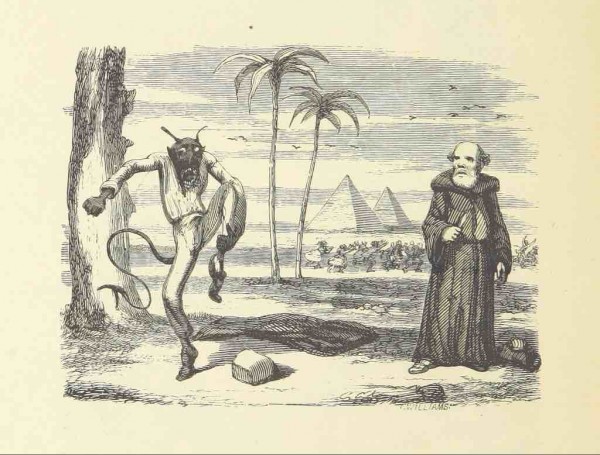 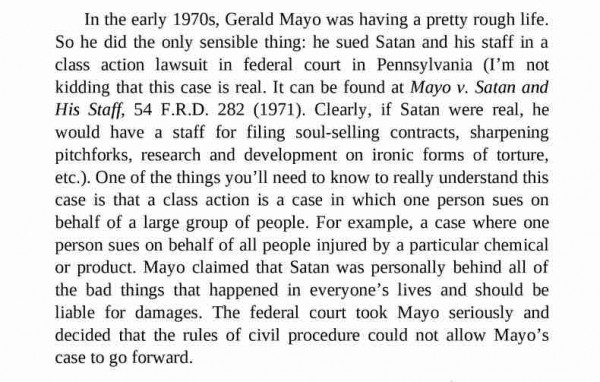 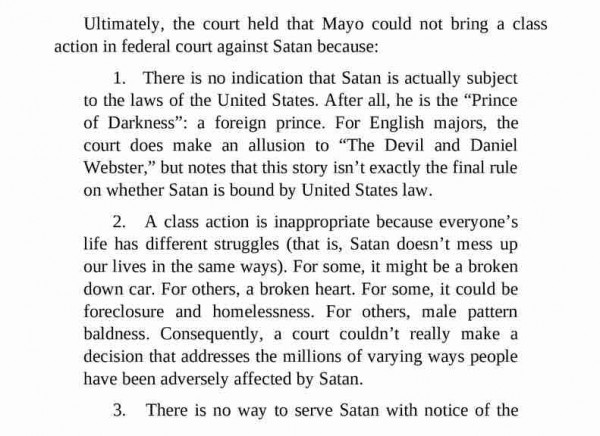 
Comments
Should'ah called on Geraldine as a witness.
Posted by Expat47 in Athens, Greece on 05/19/16 at 09:10 AM
When Ernie Chambers sued God, he said papers didn't have to be served because God is omniscient, so He obviously knows about the lawsuit.
Posted by Phideaux on 05/19/16 at 11:23 AM
Expat, that clip won't show in the US. How about this one instead? https://www.youtube.com/watch?v=eOYSlvWK6e8
Posted by Virtual on 05/19/16 at 11:24 AM
There was one recently in Haifa, Israel, where a man was seeking a restraining order against God, who, he claimed, had been treating him unfairly. The court protocols made note of the fact that the defendant, God, failed to appear at the proceedings.

The Judge didn't think of the omniscient argument. Instead, he just threw out the request, saying that the plaintiff clearly needs help, but not from the courts.
Posted by Virtual on 05/19/16 at 11:35 AM

How many times have we heard people claim the Devil made me do it! It is particularly bad when well known religious leaders who should be fully prepared for dealing with the temptations of Satan get caught performing sins related to money, often from their own church, sex, porn, sex with young children, fallen women and men,(pr0situtes), unholy consumption of alcohol and drugs, The spouses of others, perversions with people of the same sex, a occasional animal and politicians. They claim Satan seized them in a moment of weakness. Or I was attempting to save her or his virtue and had a moment of loss of control and was seduced because I left my Bible/Koran/holy book of choice in the car.
Posted by Gator Guy on 05/19/16 at 08:59 PM
@ Gator guy.

Good example of common excuses for people without a good internal set of standards for "right" and "wrong", and who lack the discipline to hold to them. I believe people like that either end up in prison, dead, or they seek out and gravitate towards religion, military or other very regimented organizations with moral or ethical codes in an attempt to keep their urges "in check".

I think it's just more visible in those types of organizations since the individuals who are unaffiliated with one or more of them fail to make the news.
Posted by Kyle Morgan on 05/20/16 at 12:19 PM

Surely, to serve a writ to Satan, all you need to do is give it to a corporate lawyer and then kill him on the spot, at which point he'll go straight to the defendant?
Posted by Richard Bos on 05/22/16 at 04:51 PM
Commenting is not available in this channel entry.