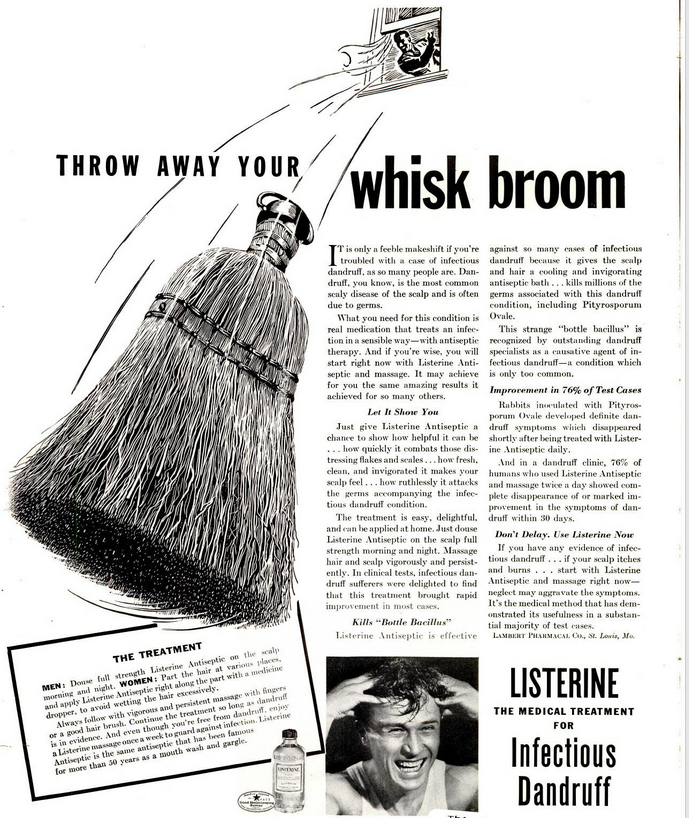 
Comments
This appears to still be a thing. Some people swear by it! And, being a dandruff sufferer (sadly), I just might give it a try. If nothing else, I can have fresh breath too!
Posted by David Plechaty on 11/07/17 at 11:19 PM
Is there anything that can't be solved with an application of Listerine? There is the urban legend that it makes a great contraceptive, but I've never heard or seen any studies confirming that. (And please don't let's start on Lysol for the same use. That's just horrific!)
Posted by KDP on 11/08/17 at 07:04 AM
It makes sense to me. The current consensus is it's caused by either bacteria or a fungus. In the days before anti-fungals or bacteria-specific antibiotics, a general antiseptic was about the best you could do. On the positive side, it was probably the days before it was mint-flavored, so you didn't go around smelling like a grasshopper afterwards.
Posted by Phideaux on 11/08/17 at 10:17 AM
My understanding is that Listerine was originally marketed as an antiseptic, for treating cut and scratches. I believe it was even used as a douche. Only later was it sold as a mouthwash.
Posted by Brian on 11/09/17 at 10:01 PM
Commenting is not available in this channel entry.