Found in the American Artisan and Illustrated Journal of Popular Science - May 1867:

Facial recognition software, increasingly important to global anti-terrorism operations, is being brought to . . cats. Taiwanese developer Mu-Chi Sung announced in July plans for marketing the software as part of a cat-health device so that owners, especially those with multiple cats, can better monitor their eating habits. Sung’s set-up had to overcome an problem of how to get the cat to stick its head through a slot so the software can start to work. The device, with mobile apps for remote monitoring by the owner, may sell for about $250. [CBS News, 7-22-2014]

The Environmental Protection Agency is already a News of the Weird favorite (for example, the secret goofing-off “man cave” of one EPA contractor in July 2013 and, two months later, the fabulist EPA executive who skipped agency work for months by claiming falsely to be on secret CIA missions), but the agency’s Denver Regional Office took it to another level in June. In a leaked memo, the Denver director implored employees to end the practice of leaving feces in the offices’ hallway. The director referred to “several” incidents. [Government Executive, 6-25-2014]

The federal food-stamp program, apparently uncontrollably rife with waste, has resorted to giving financial awards to the states that misspend food stamp money the least. In July, the Florida Department of Children and Families, beaming with pride, announced it had won a federal grant of $7 million for having blown only $47 million in food stamp benefits in 2013 (less than 1 percent of its $6 billion payments). (Vermont, the worst-performing state, misspends almost 10 percent of its food stamp benefits.) [Fox News, 7-8-2014]

The Way The World Works: The U.S. Occupational Safety and Health Administration came down hard in July on West Virginia’s Freedom Industries for violations of chemical safety standards in January 2014 that resulted in the 10-day contamination of the drinking water for 300,000 residents. OSHA issued two fines of the company--one for $7,000 and the other for $4,000. [West Virginia Gazette, 7-7-2014]

Ms. Milo Moire, a Swiss performance artist, startled (and puzzled) fairgoers at Germany’s Art Cologne in April by creating a painting while standing on stage nude and expelling “eggs,” filled with paint and ink, from her vagina. Each “PlopEgg” canvas made what she called a powerful feminist statement about women, fertility, and creativity. (In June, she attempted to tour Switzerland’s Art Basel fair “wearing” only the words of clothing items written on her nude body, e.g., on her leg, the word “pants.” Officials told her to go get dressed if she wanted to see the show.) [Huffington Post UK, 4-22-2014]

Update: Critics praised bad-girl British artist Tracy Emin’s 1998 furniture-and-effects exhibit, “My Bed,” supposedly representing a failed romantic relationship, featuring mussed sheets and, littering the room, empty vodka bottles and used condoms. Prominent collector Charles Saatchi turned heads when he bought the piece for the equivalent of about $200,000, and in June, almost 15 years later, he sold “My Bed” at auction for the equivalent of $4,330,000. [BBC News, 7-1-2014]

In July, the large cement “Humpty Dumpty” at the Enchanted Forest in Salem, Ore., created by Roger Tofte in 1970, was destroyed when two intruders tried to climb the wall that Humpty was sitting on. However, the wall crumbled, and Humpty suffered a great fall, and Tofte said he doubted he could put Humpty back together again but would try instead to make a new one. [KOIN-TV (Portland, Ore.), 7-5-2014]

Sheriff’s deputies in Salina, Kan., arrested Aaron Jansen, 29, but not before he put on quite a show on July 5th. Jansen, speeding in a car spray-painted with derogatory comments about law enforcement, refused to pull over and even survived a series of tire-shredding road spikes as he turned into a soybean field, where he revved the engine and drove in circles for 40 minutes. As deputies set up a perimeter, Jansen futilely tossed items from the car (blankets, CDs, anything available) and then (with the car still moving) climbed out the driver’s door and briefly “surfed” on the roof. Finally, as deputies closed in, Jansen shouted a barrage of Bible verses before emerging from the car wearing a cowboy hat, boots, and a woman’s dress. [KAKE-TV (Wichita), 7-7-2014]

The surveillance video in evidence in England’s Wolverton Crown Court in July captured the entire caper of two young men comically failing to open a parking lot’s automated cash machine five months earlier. Wearing hoods, they tried to batter the secure machine open, then tried to pull it away (but learned that it was rooted to an underground cable). Plan C involved getting in their Peugeot and ramming the machine, which did knock loose the money-dispensing part--but also shredded part of the car’s body. The dispenser (with the equivalent of $1,500 in coins) fit in the front seat only after some exhaustive pushing and cramming, but finally the men drove off--with sparks flying as the weight of the coins made the crippled car scrape the pavement. Police arrived on the scene, and a brief chase ended when the car crashed into a wall. Final score: car totaled, money recovered, and Wesley Bristow, 25, sentenced to two years in prison. [Express and Star (Wolverhampton, England), 7-5-2014]

(1) Roy Ortiz hired a lawyer in March and said he was considering suing the first responders who rescued him during the historic September 2013 flooding around Broomfield, Colo.--because they failed to find him fast enough when his car plunged into raging waters. (2) In March, Houston, Tex., sheriff’s deputy Brady Pullen filed a lawsuit against the grieving family of the delusional man he was forced to shoot and kill during a 2012 emergency call--because Pullen had been injured in the skirmish and believes the family failed to warn him just how dangerous Kemal Yazer was. (Also, in Alcona, Ontario, in April, Sharlene Simon, 42, filed a lawsuit against the family of the teenage bicyclist she accidentally ran down, fatally, in 2012--claiming that the boy’s dangerous joyriding at 1:30 a.m. initiated the events that left her traumatized.) [KCNC-TV (Denver), 3-4-2014] [Houston Chronicle, 3-29-2014] [Toronto Sun, 4-25-2014]

In May, News of the Weird presented readers a Floridian with drug charges named Edward Cocaine. In June, in Lake Wales, Fla., Ms. Crystal Metheney, 36, was arrested on a (BB-) gun charge--but she also has a drug arrest (marijuana) on her record. In July a southern Oregon wildfire investigation turned up suspect Freddie Smoke III, 27. And for less-mature News of the Weird readers, Ryan Smallwood, 26, was arrested in Rock Hill, S.C., for making obnoxious sexual comments in a restaurant. [The Smoking Gun, 6-12-2014] [Associated Press via The Guardian (London), 7-15-2014] [Rock Hill Herald, 5-12-2014]

Recurring Themes: (1) Moshood Itabiyi, 22, was arrested in a traffic stop in July shortly after allegedly robbing the Northview Bank in Barnum, Minn. His dream of a quick getaway had vanished when he discovered that he had locked his keys in the car, and he was forced eventually to burglarize a nearby house for a hammer to smash a window open and get going. (2) Three teens, ages 13, 14, and 15, were charged with attempted burglary in St. Petersburg, Fla., in July when, as they were serial-testing parked cars’ doors to find an unlocked one, they happened to inattentively open the door of an unmarked police car with two detectives inside. [KBJR-TV (Duluth), 7-11-2014] [Associated Press via WCTV (Tallahassee), 7-17-2014]

The Fragrance of Love: First, farmer Dick Kleis of Zwingle in eastern Iowa, composing a birthday note to his wife, arranged more than 60 tons of manure in a pasture to spell out “Happy Birthday, Love You” in shorthand. Then, for Valentine’s Day [2010], farmer Bruce Andersland created a half-mile-wide, arrow-pierced heart from plowed manure at his farm near the town of Albert Lea, Minn. “Now,” shouted wife Beth, viewing the aerial image, “I’ve got my valentine!” [WTTG-TV (Washington, D.C.), 1-5-10] [Albert Lea Tribune, 2-11-10]

Thanks This Week to Gerald Sacks, Mel Birge, Bruce Leiserowitz, and Cindy Hildebrand, and to the News of the Weird Board of Editorial Advisors. 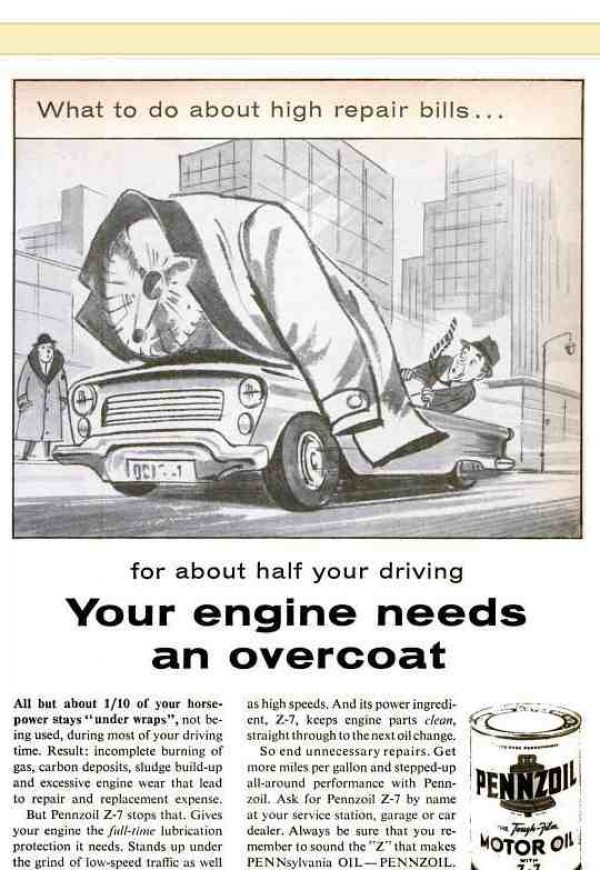 Clunkiest metaphor ever. Garment causing deadly vision obstruction that will be shredded by fanbelt = engine protection. 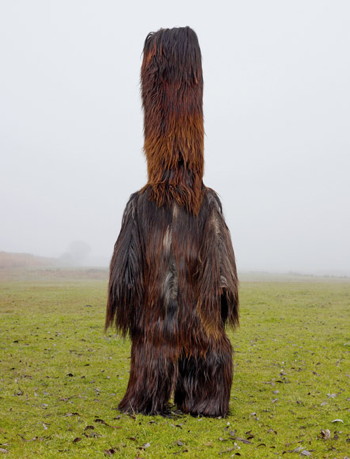 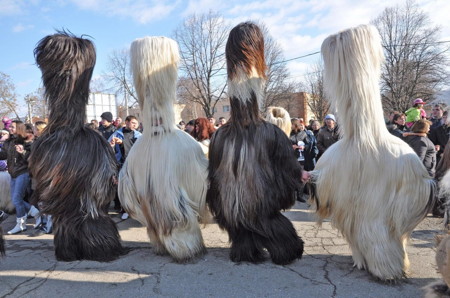