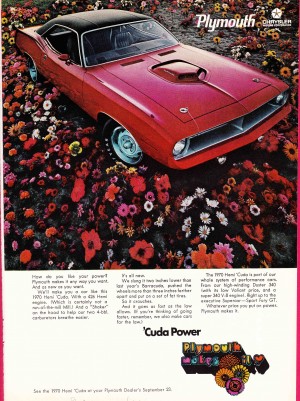 You know, even in 1969, despite the prevalence of hype connected with "flower power," I don't think anyone was going to believe that automobiles were pro-nature. And aren't flowers kind of a sissy image for a muscle car anyhow?

Those Pancakes Are The Bomb

New Mexico bomb squads compete each year at the Los Alamos Robot Rodeo. Amongst other challenges the bomb squad crews make pancakes via the robot which are then taste tested by judges for a winner. Making necessary training fun, what a great idea. 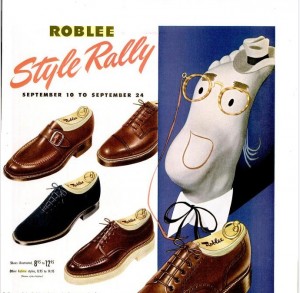 Prime Cuts of Underreported News from Last Week, Hand-Picked and Lightly Seasoned by Chuck Shepherd
May 31, 2010
(datelines May 22-May 29) (links correct as of May 31)

Principle! Massachusetts state Rep. Mike Moran–one of those enlightened people who would give border-jumpers like Isaias Naranjo a leg up toward U.S. citizenship over those idiotic goofball Mexicans who actually, y'know, filled out the paperwork at U.S. consulates and patiently waited to enter the U.S. legally–says his views haven't changed on that even after Señor Naranjo, DUI and doing 60 mph, accidentally rammed into him (and even though, when questioned by police, Sr. Naranjo just laughed and said, "I plan to go back to my country, Mexico. Nothing is going to happen to me, man."). WHDH-TV (Boston)

Principle (II)! Mexico's Foreign Ministry declared that Arizona's new law (requiring citizenship status-checks of arrestees) "violates inalienable human rights" (a point echoed by Presidente Calderón during his recent trip to Washington). Turns out that Mexico has almost precisely the same law on the books for its own, mostly Honduran, immigrants. According to some of them, Mexico doesn't rely on deportation but rather on beatings, then theft by police of immigrants' money and property, then prison. USA Today

Sounds Like a Joke: Juries' perhaps-primary duty is to assess the credibility of witnesses. Drew McAdams was kicked off a jury in Scotland's Livingston Sheriff Court because he's likely too good at it. Citizens of ordinary ignorance are preferred for juries, and not "professional lie detectors" like McAdams, who is a former Army intelligence officer who made a name for himself on TV reading human body language. That's apparently TMI. Scottish Daily Record

A Hard Rain's a-Gonna Fall–But Not on France: The European Community is in considerably worse shape financially than even the U.S. Community–yet French workers went on strike last week over the issue of preserving their retirement age . . at 60. Associated Press via USA Today

Pakistan and India are vying for conspiracy capital of the world. Zaid Hamid, the Pakistani Glenn Beck, is just one of many spreading word that the U.S. is behind every single bad thing that has befallen the country (e.g., America planted that Times Square bomber, to embarrass Pakistan). But then in the Indian state of Punjab, an official captured a pigeon with strange markings, which he said were obvious indications that the pigeon was sent on a spy mission by Pakistan. (Bonus: The pigeon is being held incomunicado in, like, the Punjabi Gitmo.) New York Times /// Agence France-Presse via New York Post

In the first decade of the 21st century, your house, job growth, and 401(k) have pretty much tanked. However, over the first decade of the 21st century, a guy named Eddy Curry will make $72 million, no strings attached. Eddy's a pro basketball player, but not a very good one, and he's got a heart condition, anyway, and his coaches don't much want him around. (Bonus: He's still closing in on being bankrupt!) Associated Press via NBC Sports /// Sports.Yahoo.com

" />
A new world record has been set for the highest rollerskating jump in France. Taig Khris jumped from the first floor of the Eiffel Tower, 131 feet, on to a ramp and skated then fell and slid into a wall of padding to a stop. A brave Frenchman!