Here's a list of 20 great gadgets! The gadgets range from the slightly weird such as the blank keyboard above to the rather bizarre sex robots. With plenty of strange stuff in between. Be sure to check out the boob radio!

Clocky The Alarm Clock And Friends

Clocky the alarm clock is its name, but I am guessing s.o.b. is what it gets called most days. An alarm clock that runs around the room so you have to get up to find it and turn it off. The 'and friends' are here 14 unusual if annoying ways to make sure you wake up on time in the morning.

Many thanks to my dear friend BD for the clocky link, love ya hon! 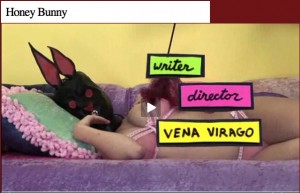 You can see a list of finalists for the 2010 awards at the site. Perhaps you would care check out the trailer for one of the contenders, HONEY BUNNY, a still from which graces our post above this text.

Needless to say, everything is rather NSFW.

SPECIAL [BRIEFER] HOLIDAY EDITION: Less for you to read! Fewer distractions for those with other holiday duties! (Regular-length distractions resume January 3rd)

The Vaginal Steam Bath, Plus Mice That Chirp and the Church of Scum

The Concept Is "Not Insane": A California M.D. gave that reassuring endorsement to the latest health craze in L.A.: the vaginal steam bath (with mugwort tea and wormwood, among other herbs, wafting up into the nether region). (Men can lower themselves onto the vapors, too, to soothe the perineal area, especially those with a super-active perineal area.) It's an ancient Korean treatment, at about $50 for a half-hour squat (or, for Koreans in the ethnic shops, $20). (The question is why, since Koreans have been populating Los Angeles for 50 years, we're only now being told of this essential therapy.) Los Angeles Times

If the Extraterrestrials Check Who's Outside, They May Change Their Minds: Word-of-mouth (some of the mouths agape with vacancy) has prompted a growing population of conspiracists to congregate in Bugarach, in southwestern France, near the mountain inside which (as everybody knows) extraterrestrials have been holing up, waiting for the signal (hint: 12-12-2012) to come out, gather the chosen Earthling survivors, and head back to the Mother Planet. Probably, the idea was for them to select smart, hardy people, but peering at who's assembling around Bugarach, they may just flee in despair. (Or, normal people could be wrong, and Bugarach could be the only place to survive Armageddon.) The mayor is starting to worry, though, as his lovely village of 189 is slowly overrun with conspiracists. Daily Telegraph (London)

Update: They Say You'll Be Able to Make Dinner in a Printer: A lab at Cornell University is said to be leading the field in developing a 3-D Food Printer, which outputs sort of a schematic (the exact recipe for the dish), and you squirt some artificial food from a syringe onto the proper places, and cook it up, and voila! It's good that we have people who think of stuff like this. BBC News /// BoingBoing [Oh, dear! More 3-D printing!]

The Church of Tell It Like It Is: Denver's Christian catch-all for society's misfits and ne'er-do-wells is thriving after 10 years: the Scum of the Earth Church (its real name!) (cf. 1 Corinthians 4:11-13). It must have been a cool assignment for a writer to compose a story with so many "Scum [this]" and "Scum[that]" references, but on the ground, there's quite a bit of salvation going on, backed by "authentic" Christianity (instead of mindless ritualization), and as a fallback position, it's a magnet for the area's disaffected youth (as in, what could a kid possibly do to tick off his parents more than to join the Scum of the Earth Church?). Westword (Denver)

Coming Soon to Everywhere: The UK just experienced its first successful "savior sibling" procedure in which parents bred a second kid for the main purpose of creating cells to treat an already-endangered kid. That has been legal in the U.S. for a decade but kept low-key so as not to annoy the you-know-whos, who seem not to be fully aware that this happens when the in-vitro-fertilization doctor grows multiple embryos, tests each one to find the one or two with the proper cells, implants those, and then--oh, dear!--discards the others. Plus, the Los Angeles lab Fertility Institutes announced in 2009 that it would accept clients who weren't interested so much in savior-ing as they were in, um, creating babies with, y'know, blonde hair and blue eyes, or whatever. BBC News /// Fertility Institutes [a free Fox News summary of a not-free 2009 Wall Street Journal article]

The Reason For The Season

Blessings often times come, unexpectedly, from the most unlikely situations. I hope unexpected blessings touched all of you today.

How to Pour a Beer

May all WU readers and contributors enjoy a nice tall frosty beer--or beverage of your choice--this holiday! Or even more than one!

See you on the far side!

Thanks again to Danny53 for a great link!