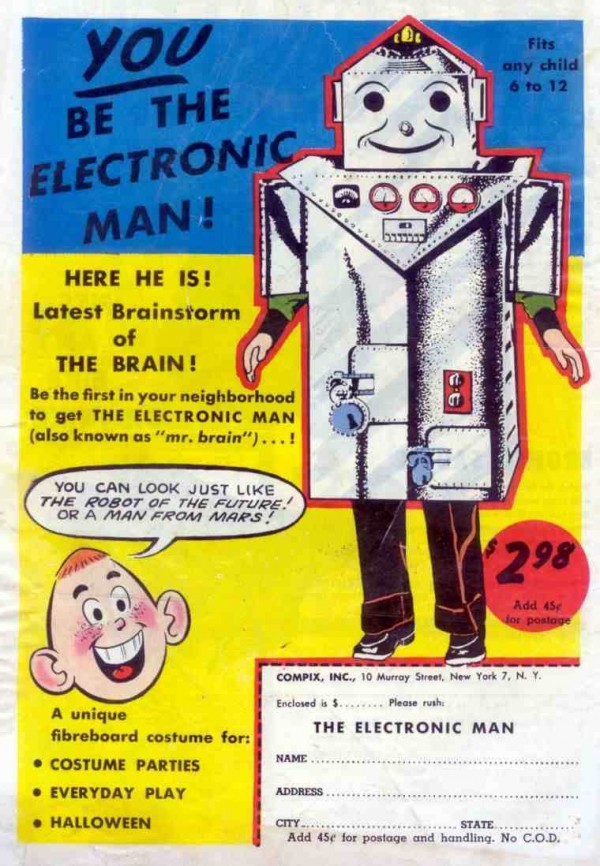 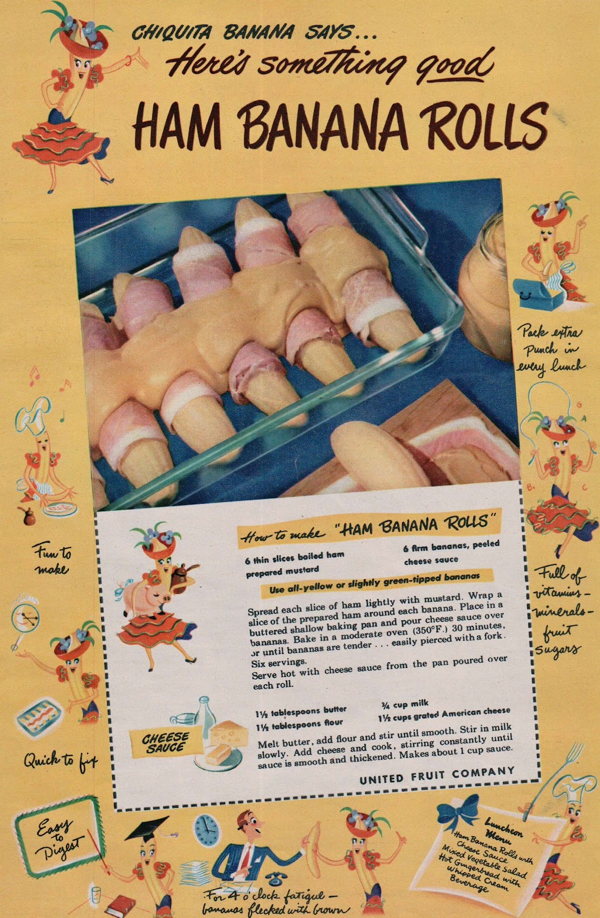 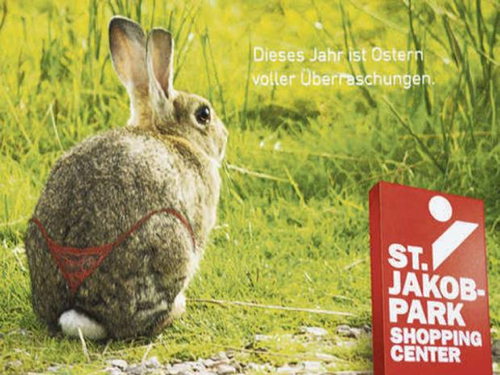 An Easter ad campaign recently generated controversy over in Europe. A Swiss shopping center promoted the opening of a new shop by running an advertisement showing a rabbit that (through the magic of photoshop) appeared to be wearing a pair of panties. A representative from an animal protection group said, "From our point of view, the respect of the rabbit has been badly damaged." And went on to suggest that the image could promote unwholesome feelings of desire towards animals.

This isn't the first time WU has reported on an Easter bunny controversy. Two years ago we called attention to an ad for Cadbury's caramel nibbles that featured a similarly provocative rabbit. 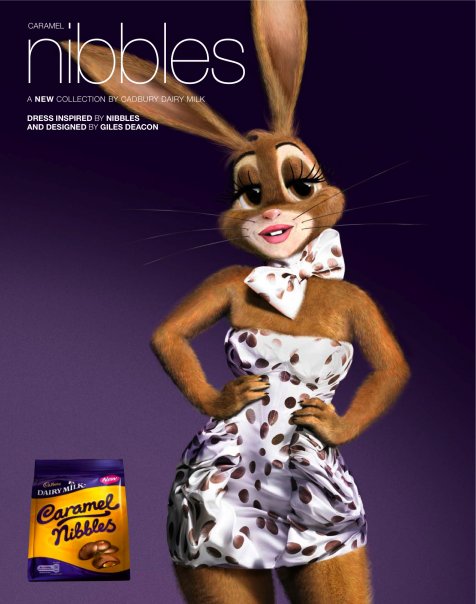 First-term U.S. Rep. Ted Yoho of Florida is already among the House’s most conservative members, but his Republican primary challenger claims to be even more so--but with a quixotic, long-time hobby as a costumed, role-playing “gamer.” Challenger Jake Rush (in his day job, a lawyer) portrays supernatural characters as a prominent member of the national Mind’s Eye Society and Florida’s Covenant of the Poisoned Absinthe, including a vampire named “Chazz Darling,” who, according to a Yahoo message board once left an explicit, body-parts-bloodying threat to a role-player with whom he had been feuding. (The Florida political report SaintPetersBlog broke the story--and was quickly criticized, less by Rush’s political defenders than by the indignant “cosplay” community, feeling mocked.) [SaintPetersBlog, 4-1-2014] [MiamiNewTimes.com, 4-1-2014]

A scandal erupted in 2013 at Minot (N.D.) Air Force Base when missile-launch specialists were charged with cheating on proficiency tests, but additional documents uncovered by the Associated Press in March 2014 show that the problem was worse than originally reported. The overall missile-launch program, run by “missileers,” was judged “substandard”--the equivalent of an F grade in school--and “rehabilitated” in the eyes of Air Force officers only because the 91st Missile Wing Command’s “support” staff (cooks, drivers, clerks, etc.) scored very high and brought the Command’s overall performance to the equivalent of a D. [Associated Press via PBS Newshour, 3-14-2014]

The tax software company Vertex reported in March, via the Tax Foundation, that tax-hating American states have somehow organized themselves into nearly 10,000 sales/use-tax jurisdictions with distinct rules, coverages, or exemptions. Ironically, states criticized as tax profligates sometimes have the simplest systems (e.g., one set of rules covering the entire state, such as in Connecticut, Massachusetts, and Washington, D.C.) while states regarded as refuges from intrusive government often have the most complicated (e.g., 310 different jurisdictions in Utah, 587 in Oklahoma, 994 in Iowa, and 1,515 in Texas). [TaxFoundation.org, 3-24-2014]

Formally asking a sweetheart to “please be my [boyfriend/girlfriend]” is said to be a traditional romantic milestone in Japanese relationships, and the town of Nagareyama in Chiba Prefecture now provides a government document to commemorate that big step (for a filing fee, of course). In fact, according to the news site RocketNews24.com, since only one party need file the document, the town hopes the form will become a strategic step to declare one’s love without the need for messy, face-to-face, rejection-risking confrontation (and also become a robust municipal-revenue producer). [RocketNews24, 3-10-2014]

British artist Millie Brown, 27, profiled January in London’s Daily Mail, creates Jackson Pollock-style canvases by vomiting on them after ingesting colored soy milk. Brown (whose work hangs in London’s Ripley’s Believe It or Not! showcase) said she fasts for two days prior to public performances and, as the show starts, times her ingestions so that the proper hues don’t prematurely mix in her stomach. Her appearance, at work, in a Lady Gaga music video brought her a somewhat larger audience. Said the understated Brown, “I am able to challenge people’s perceptions of beauty.” [Daily Mail, 1-31-2014]

Paris’s Hunting and Wildlife Museum hosted, from April 1st-13th, artist Abraham Poincheval’s real-time demonstration of “birth and rebirth”--his living completely inside a hollowed-out bear carcass the entire time, eating, drinking, reading, sleeping, and relieving himself (down the bear’s legs) before a live camera, with a viewing window for spectators. Poincheval, who in a previous installation lived for a while in a hole, likened the experience merely to the cramped quarters of astronauts. [Huffington Post, 4-11-2014]

Petty Theft: (1) Although Douglas Lydic, 29, escaped from a patrol car in December in Commodore, Pa., while handcuffed (and was soon re-captured), prosecutors declined to charge him with fleeing since he was merely being “detained” at the time. However, they did charge Lydic with theft of the handcuffs. (2) Petty and Tacky: Dustin Bell, 25, wearing a police officer’s badge that had been stolen from the Sand Springs, Okla., department, apparently only casually considered how to wield his newly-acquired “authority.” He was arrested in April after asking at a Tulsa tanning salon for a law-enforcement discount--to get a $34 session for $10. [Associated Press via PoliceOne.com, 12-25-2013] [KOTV (Tulsa), 4-6-2014]

Misunderstanding: Four Maine State Police troopers rushed to a home in the town of China in January, alarmed by 911 calls about an assault in progress (according to neighbors who reported raucous screaming). Trooper Thomas Bureau found that the suspected “crime scene” was the home of a pig farmer, who showed troopers the pen out back in which a male had been placed with five sows “in heat” and that the squealing (either by the sows or the beleaguered male) was not unusual. [Morning Sentinel (Waterville, Me.), 2-5-2014]

Hard Times Ahead: (1) Ms. Terry Boyd, 52, was ordered to probation in Wausau, Wis., in February on charges of imprisoning two men in a second-story bedroom, leaving them screaming for help from a window. According to police, Boyd had refused to release the men until at least one agreed to have sex with her. (2) After Maria Montanez-Colon, 58, called 911 in February in Punta Gorda, Fla., the responding officer reported that she immediately began fondling him, describing herself as “horny,” noting “I haven’t been penetrated in years.” The officer politely declined and warned her about frivolous 911 calls, but Montanez-Colon was arrested shortly afterward when she called again, asking the second responding officer, “How else am I going to get [to have sex]?” [Wausau Daily Herald via Stevens Point Journal, 2-28-2014] [The Smoking Gun, 2-25-2014]

Possibly DUI: (1) Michael Moore, 61, who had left home in a huff on March 4th after his wife accused him of excessive drinking, was arrested later that night in Hobe Sound, Fla., after more drinking at a bar. He suggested to police that he knew he was drunk but had taken the wheel to try to “drive it off.” (2) Bryan Hill, 24, was arrested in Indianapolis in March, passed out in the driver’s seat of his car at 4 a.m. wearing only a t-shirt, underwear, and one sock. The officer said Hill “did have pants on, but they were on his arms. Both arms were inserted into the legs of his jeans.” [WPLG-TV (Miami), 3-7-2014] [The Smoking Gun, 3-24-2014]

(1) Japan’s largest, most influential organized-crime syndicate, the Yamaguchi-gumi, recently launched an extensive anti-drug, humanitarian campaign with a website and folk-song-like ballad extolling the group’s civic-mindedness backing up photographs of earnest, joyful men at work in their communities. (2) Italy’s former premier, Silvio Berlusconi, booted out by voters last year after he finally embarrassed them (and who is awaiting sentence for tax evasion and trial for bribery), began a comeback in March--by becoming the face of a dog-and-cat rescue program. “Dogs and cats,” he assured supporters, “will help [the Forza Italia party] win the European elections.” [The Guardian (London), 4-2-2014] [The Independent (London), 3-30-2014]

In April, Louisiana state senators rejected Sen. Elbert Guillory’s over-the-top campaigning to make “chicken boxing” legitimate, dismissing his proposed bill and leaving the “sport” banned along with cockfighting. The proposed law would still have permitted sharp spurs on fighting roosters’ legs but required promoters to cover them with rubber gloves. Guillory had pleaded with colleagues, “[There would be no] blood . . . no knives . . . no cruelty . . . no abuse,” as he futilely held up pairs of the tiny “chicken boxing” gloves. [Times-Picayune, 4-7-2014]

Not Ready for Prime Time: (1) Mr. Yafait Tadesse was sentenced in federal court in March to a year in jail for filing fraudulent tax returns for certain “Walmart employees,” from fictitious addresses, for 2012 and 2013. Among the fake returns that Tadesse apparently failed to double-check was that of supposed Georgia Walmart employee “Eric Holder”--the U.S. Attorney General. (2) Ryan Trembly, 29, was charged with trying (futilely) to rob Bubbles Hair Salon in Annapolis, Md., in April. Explained the salon’s receptionist, “He was like, Give me all your money, and I said, Not today! Who tries to rob a salon?” Trembly left, to the sound of her laughter, and was picked up in a car found to belong to his mother. [Fox News, 3-13-2014] [WJZ-TV (Baltimore), 4-10-2014] 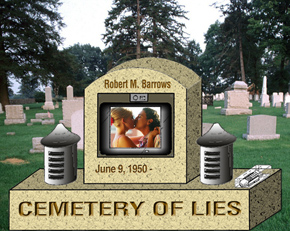 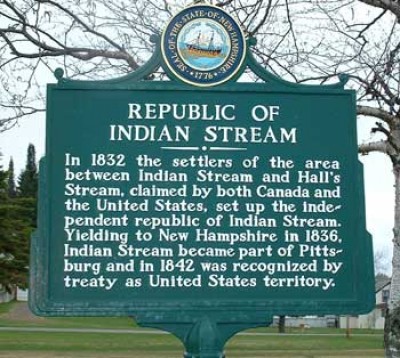