Refreshment on the Job

The economy that soda built.

The Osiligi Maasai Warrior choir, from Kenya, in their ornate, mystifying native costumes and uncalled-for headdresses, happened to be touring the UK this fall, coinciding with the recent Paris Fashion Week in which the most celebrated designers from the “developed” world exhibited their wares, which often seemed as excessive as the Maasais’. Examples: Rei Kawakubo’s “Blood and Roses,” a red KKK-type swaddling robe with face-obscuring, pointy hood. Sarah Burton’s skirt of oversized petals, accessorized with skull cap and chin strap. Junya Watanabe’s dress with huge plastic puff sleeves of red and blue--and vinyl see-through helmet. Julie de Libran’s gown with ear-muff-like chest coverings. The week ended with a street march of “Chanel girls” (most, Caucasian) dressed as garishly as the African Masaais. (Bonus: Some designers delightfully offered explanations of their often-inexplicable works.) [New York Times, 10-1-2014; Washington Post, 10-1-2014]

Oops: The rural municipality of Hanover, Manitoba, has prohibited alcohol sales for more than a century--or at least that's what everyone in the community believed as recently as 2006 when the last attempt was made to repeal the ban (and failed, by 30 votes). However, town officials finally decided recently to research the prohibition (examining records back to 1880) and in July revealed, astonishingly, that no city bylaw exists making the town dry. At least one restaurateur is expected to start serving booze soon. [Canadian Press via National Post, 7-24-2014]

In August, Katja Kipping, the leader of Germany's largest opposition party (the liberal Die Linke), proposed to grant all welfare families a cash voucher of the equivalent of about $640 in order to allow each a summer vacation. "For me," she said, "the holidays of my childhood are among the most beautiful memories," and she is saddened that "three million children this summer cannot experience what a holiday means." [Daily Telegraph (London), 8-11-2014]

In October in Gresham, Ore., a 21-year-old man openly carrying a handgun he had just bought was robbed, at gunpoint, the same day. According to the police report, the robber apparently thought the victim's gun was nicer than his own: "I like your gun. Give it to me." [KPTV (Portland), 10-7-2014]

New World Order: In September, Dr. Sean Perry of the Marathon (Fla.) Veterinary Hospital saved the life of Buttercup, an orange tabby who needed blood--by giving him a transfusion from a West Palm Beach dog blood bank. According to the U.S. National Library of Medicine, 62 cats have been known to receive such "xenotransfusions," and cats are apparently the only animals (besides dogs) that can safely process dog blood. [Keynoter (Key West), 10-4-2014]

When a van on official business for the city of St. Paul, Minn., accidentally hit Megan Campbell’s Nissan Pathfinder in August, Campbell, naturally, filed a claim against the city for the $1,900 damage--normally just a cost of business for a city and one of about 400 claims a year St. Paul processes. However, the van happened to be driven by the same Megan Campbell, an employee of St. Paul Parks and Recreation, who apparently could not avoid hitting her own parked SUV. At press time, the city was investigating but expected to handle the claim as routine. [St. Paul Pioneer-Press, 10-9-2014]

Pauline Chai and her estranged husband Khoo Kay Peng (a Laura Ashley executive) are battling in a London courtroom in a very expensive divorce, with the initial issue to determine whether the current judge has jurisdiction and not courts in the couple's native Malaysia. In the course of bringing the British judge up to date, Chai casually described how she has supported her husband's relentless nature--by revealing that he would do copious amounts of work (for four hours at a time) at home while sitting on the toilet. Khoo "got backache there,” she said, “so I got the idea of [a] padded toilet seat" for him.” [Daily Telegraph (London), 10-2-2014]

The former chairman of the Federal Reserve, Ben Bernanke, revealed at an October conference in Chicago that even though his post-government income will be several times what he earned as Fed chairman, he was nonetheless rejected recently when he tried to refinance his Washington, D.C., home. Mortgage-lending is so highly computerized, he was told, dictated by formulas, that he apparently got caught in an algorithm. Despite a probably-seven-figure book contract and six-figure public speeches, he is no longer “employed” in a steady job, which apparently caused a computer program to signal him as too risky. [New York Times, 10-2-2014]

Victor Thompson, 46, arrested in St. Petersburg, Fla., in October for possession of the “synthetic marijuana” called Master Kush Spice (which he insisted is legal in his native New Hampshire), is apparently an out-of-control New England Patriots’ fan--having tattooed his entire bald head with a painstaking replica of quarterback Tom Brady’s helmet. The attention to detail on the authentic design and colors is remarkable, including subtle add-ons such as the American flag, NFL logo, and helmet manufacturer (“Riddell”). Not only is Brady’s “12" properly placed, so is the green dot identifying the “helmet” as radio-ready for messages from the sideline. [The Smoking Gun, 10-10-2014]

Police in Minneapolis arrested Nicholas Mullenmaster, 38, in October as the man who inexplicably flushed nails and other pieces of metal down toilets of several restaurants since August, causing "thousands of dollars" in damage. In most incidents, two to three pounds of nails clogged the toilets, requiring plumbing repair charges of up to $1,000 each, but at one Starbucks, a wall had to be removed. Although witnesses, and surveillance video, seemed to identify Mullenmaster as the culprit, he denied any involvement, and thus no motive for the toilet attacks has emerged. [WCCO-TV (Minneapolis), 10-6-2014]

A Duck With Issues: After days of looking weary and walking lopsidedly, “Ducka,” the pet muscovy, finally gave owner Vicki Hicks of Sydney, Australia, a clue to its behavior by coughing up a nail. Veterinarian Hamish Baron of the Avian Reptile and Exotic Animal Hospital ordered an X-ray, which revealed a small toolbox’s worth of nails, screws, and washers in Ducka’s belly. The items had to be removed, one by one, in surgeries spaced over five hours. Dr. Baron told Sydney’s Daily Telegraph in October that though birds are attracted to shiny objects, Ducka’s case was severe. [Daily Telegraph (Sydney), 10-13-2014]

Two men ran out the door of a closed-for-the-night Houston, Tex., Family Dollar store on October 7th--empty-handed, after a failed theft attempt. According to the surveillance video, one man had removed items from a bottom shelf while the store was still open, and crawled behind the shelf space just before his partner came by and restocked the shelf (thus hiding his buddy). The partner then made a purchase and left. After the last employee had closed up around 11 p.m., the “hidden” (and extremely patient!) man crawled out, surely intending to let his partner in and start snatching things, but the “hidden” man was only able to take a few steps before a motion-detector sounded an alarm, and both men fled on foot (not even bothering to grab an item or two on the way out). [KHOU-TV, 10-10-2014]

Unless Stephen Gough, 50, changes his mind about wearing pants, he risks spending the rest of his life behind bars, according to a January [2010] ruling of Scotland's Perth Sheriff’s Court. Gough, Britain's "naked rambler," is a freelance nudist who for years has roamed UK countrysides, interrupted by numerous jail stints for violating public decency. He was released from Perth Prison in December [2009] after his latest stay, but seconds later shucked his clothes and was re-arrested. (In his most recent trial before that, Gough acted as his own lawyer and somehow persuaded an overly fair judge to let him be naked in court.) (Update: Gough has remained in character, having spent almost every day since this story was published incarcerated for violating a series of Anti-Social Behavior Orders requiring him to wear clothes in public.) [STV.tv (Edinburgh), 1-12-10] [BBC News, 10-7-2014]

Thanks This Week to Susan Kennedy, Steven Lobejko, Steve Dunn, and Alex Boese, and to the News of the Weird Board of Editorial Advisors.

Sold by The Ideal Toy Corp: "Inflatable Vinylite headpieces for children, built in the shape of lions, elephants, horses, and roosters. A few puffs of air inflate each 'lid,' and a cord under the chin secures it." 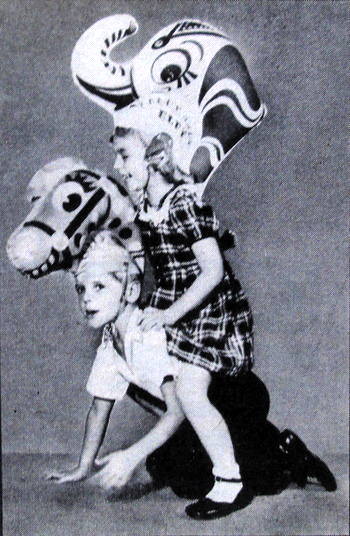 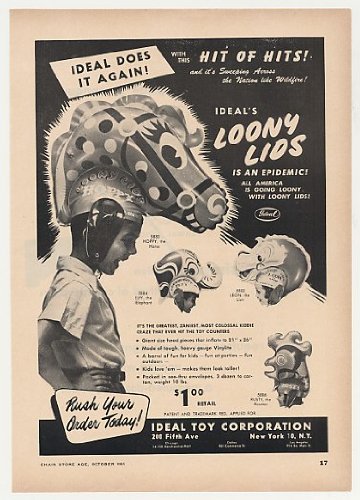 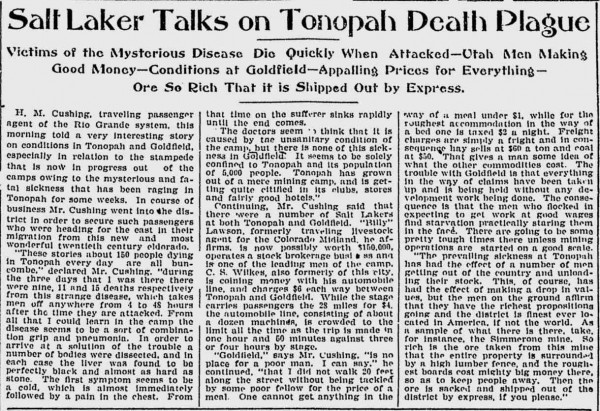 Artist Jesse England converted a typewriter to type in Comic Sans, "the most popularly despised font of modern times." He says that he hopes this will provoke thoughts about how we "create, consume, store (and fetishize) media." More info at his website. 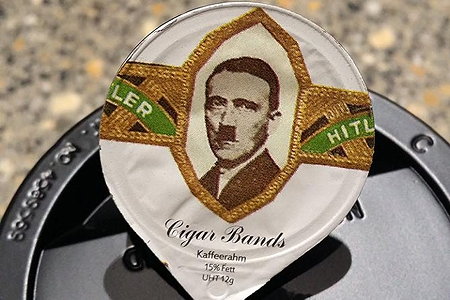 Battle of the Vintage Chocolate Drinks 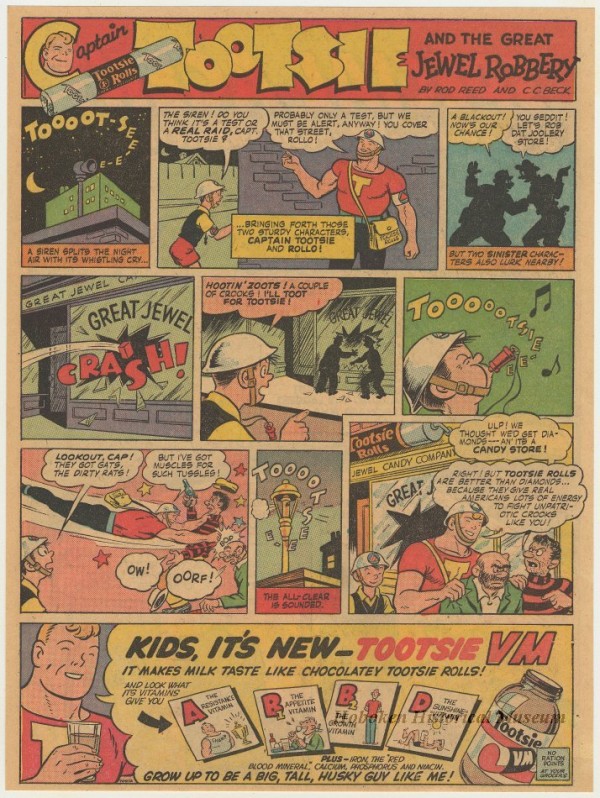