The musician Bernie Krause has had an arguably weird and fascinating career. He's gone from being a minor pop star to being a scientist in the field of bio-acoustics, or the noises of the natural world. Along the way he came up with the concept of "biophony," short for the biological symphony that each ecosystem makes.

The first clip below shows him at work, while the second is a trailer for his concepts.

Ian's Shoelace Site promises that it brings you "the fun, fashion & science of shoelaces". Wondering why your laces keep coming untied? Or maybe you're looking for some new ways to tie your shoes? Ian's is the place for you. There's even a frequently updated page of shoelaces in the news (example: "a hapless burglar was left hanging upside down against a window after trapping a shoe lace during a break-in"), as well as a Shoelace Urban Myth Warning:

At a zoo in China, they've supposedly watched gay penguins trick straight penguins out of their eggs (leaving stones in their place). [Ed.: That's what it says here. I only know what I read in the papers.] Daily Telegraph (London)

An Ohio woman gets her writerness on, daily, by waxing baroque about, um, Brian Williams's neckties. Associated Press via Washington Post

Manabu Mizuta, 35, was arrested in Osaka prefecture, charged with releasing hundreds of beetle larvae on a commuter train "to see women get scared and shake their legs." Agence France-Presse

Recurring Themes galore: (1) Another janitor accidentally trashed an underappreciated art project (Bonus: Woman climbed into the Dumpster to look for it); (2) Another incompetent multi-tasker (texting-driving) (Bonus: He won't be doing it again.) (3) Another cat lover with too many (Bonus: "This is the first [case] I've been to where the people were actually sleeping with dead carcasses"); (4) Another girl with a hairball in her stomach. Atlanta Journal-Constitution /// KQRE-TV (Albuquerque) /// Springfield (Ohio) News Sun /// The Times of India 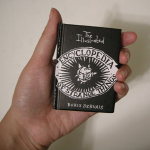 The Illustrated Encyclopedia of Strange Things, by Boris Servais, is a book you won't find for sale on Amazon. Servais had it "Produced in Italy by a specialized printer for small-size books, it collects odd discoveries and inventions around nostalgic aviation, astronautics, time trips or science fiction warfare." Below is an example of one of the entries. (via Book By Its Cover) 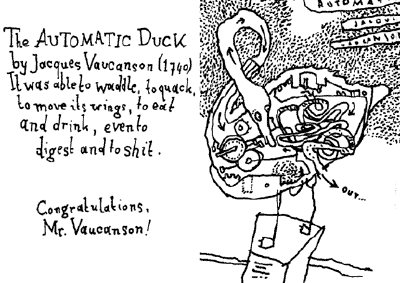 What is this a list of? (Googling is cheating.) Click on "More" or "Comments" for the answer.

Before you dig into your turkey today, check out Preston Pittman demonstrating his turkey calls. Happy Thanksgiving!