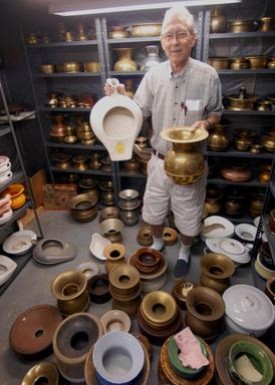 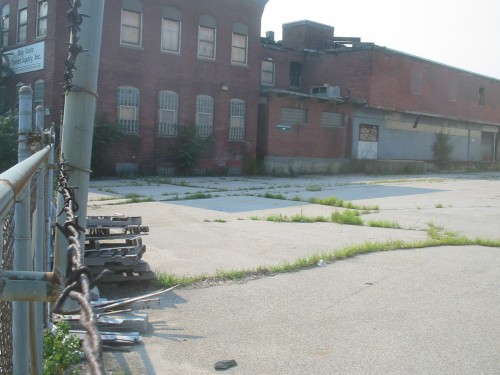 I took this photo yesterday on my walk around Providence. It's an abandoned factory that used to be a Florist Supply Center. Actually, I have a personal connection with this building. Thirty-five years ago, one college summer, I drove an ice-cream truck. This building was the ice-cream wholesaler where I would restock.

In any case, it's half-gutted now and unreachable behind a fence. I was disappointed, because I wanted to capture the weird graffiti I could see. But I took a shot from the street, and, with magnification, the spray-painted message faintly visible right-of-center in the big photo does indeed show up. (And actually, if you click twice on the whole photo, you can see the legend in context.) 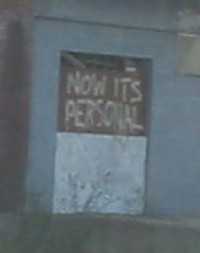 What can this possibly mean? The building shows a little fire damage. Maybe the owner suspected arson, and was warning the culprit. 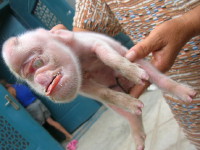 Own your own mankini

This post is specially for Paul, since I know he's a big fan of mankinis. For only $17.99 you too can show off your stuff in a bright green mankini next time you're at the pool or beach. Available from Amazon.

Top 10 improbable religious artifacts
This is Fox News's selection (including Jesus's image on the fish stick and the fish bone), but original links aren't provided, and actually, Chuck can do better. [WeirdU Ed.: Then, why don't you, huh?] All U.S. readers of Weird Universe have one thing in common with the people who are certain that these sightings are "signs": In November, your votes will count no more than theirs. Fox News
Comments 'improbable_jesus'

British prosecutor, age 56 and on disability leave for a year, is trying to pick up side work as a nude model
Clifford Allison, 56, actually will take any show-business work, from acting to voiceovers, but there is his model portfolio, right there on his website, including a nude-perched-on-stool pose. Daily Mail (London) [modest, but maybe Not Safe for Work]
Comments 'naked_prosecutor'

"This case highlights the importance of having comprehensive [health] insurance"
Er, for pets. That was an executive of the insurer PetPlan, referring to Briton Tanya Dickson's cat Hetty, who needed complex facial reconstruction following a run-in with a car (broken jaw, dislocated nasal cavity). She didn't have insurance, and the meter reads £7.5K so far. Daily Telegraph (London)
Comments 'pet_insurance'

The secret to tastier tuna: acupuncture 'em
Calm tuna thrash less during the check-out process, which purifies the blood and improves the flavor, says the president of Osaka's Osakana Planning Company, whose family would appreciate it if you would please believe him. The company already massages its cows and sets its dogs to dancing [WeirdU Ed.: We don't know whether Osakana ultimately does the same thing to the dogs that it does to the cows and the tuna] The Times (London)
Comments 'acupuncture_tuna'

Art that was too explicit to show in 1947 now presents a new problem
The oil painting, Newport Nude, done by a prominent artist but stuffed away for 60 yrs because the model was topless, has finally been dusted off for a show at a Welsh gallery—except now it's being badmouthed because, in the model's hand at the far left of the frame is, God forbid, a cigarette! The Times (London) [Not Safe for Work]
Comments 'newport_nude'

Readers' Choice
Keith Walendowski (who well may be innocent; you'll have to evaluate his mugshot) was arrested in Milwaukee for blasting his dysfunctional lawn mower with a sawed-off shotgun. "It's my lawn mower and my yard, so I can shoot it if I want," he argued, but police said the gun is illegal. It's especially bad since Keith had allegedly been "drinking all morning" before the 9:30 a.m. incident. Journal Sentinel
Comments 'shotgun_lawnmower'

People Whose Sex Lives Are Worse Than Yours
Wyne Johnson [Ed.: I know what you're thinking, but it's Wyne], 17, was picked up by police in the lingerie section of a Belk department store in Macon, Ga., wanking. He said, well, he had just talked to his girlfriend on the phone and "couldn't help himself." Macon Telegraph
Comments 'wyne_johnson'

Your Daily Jury Duty
[no fair examining the evidence; verdict must be based on mugshot only]
Ryan Halverson, 18, Freeport, Tex., might possibly have been drunk when cops picked him up and might also have leaned over and licked the arresting cop's face while being searched. KVUE-TV (Austin)
Comments 'ryan_halverson'

More Things to Worry About on Saturday
"Starving Bears Eat Russian Guards" [Sydney Morning Herald headline, on the 30 salmon-starved bears on Russia's Pacific coast that have cornered platinum-mine workers] . . . . . Gwinnett County, Ga., inspectors decided it was close, but that the Super Grand Buffet was cleaner than the Mar y Tierra Family Mexican Restaurant, by a score of 15 to 13 in the 100-point health department evaluation (and both were shut down on the spot) . . . . . Sheriff's deputies went into full red alert after Deltona, Fla., city commissioner Zenaida Denizac found a doll with her photo stuck to its face, along with several voodoo-ish pins sticking in it [link has video]. Today's Newsrangers: Mindy Cohen, Stephen Taylor, Scott Langill, Sam Gaines, and oh-so-many contributors of the Readers' Choice story.
Comments 'worry_080726' 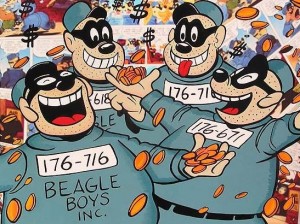 Update: San Francisco's sanctuary-for-illegals caca hits the fan
Bad enough that minors who are drug-runners get shielded by the city from deportation [NOTW Daily, 7-2-2008]. It came out yesterday, at a court hearing, that back on June 22, a San Fran illegal gunned down three people in a road-rage incident. The shooter apparently had been arrested at least three times, and convicted of at least two felonies, but had avoided deportation because San Fran doesn't approve of federal immigration laws. (Bonus: Besides, the shooter is reportedly a member of the absolutely vicious MS-13 Salvadorean gang.) Associated Press via ABC News
Comments 'sanctuary_illegals'

To some Israeli Ulta-Orthodox, MP3 players are fine, but MP4s are tools of terrorism
MP4 players (that play video) are widely available in Jerusalem, but for some reason the Ultra group Sicarii decided to hassle this one store, screaming "Terrorists! Terrorists!" out front (referring to the employees). Similarly, to Sicarii: Cell phones OK; text-messaging, evil. Ha'aretz [LINK CORRECTED]
Comments 'mp4_terrorists'

Your Daily Loser
A pathetically unathletic woman in her 20s in London swiped the purse of a 78-yr-old woman and took off running, but granny chased her down and got it back. (Well, actually, she's the granny of an Olympic sprinter, but still, she's 78.) Daily Telegraph (London)
Comments 'granny_chased'

More Things to Worry About on Friday
Self-employed Welsh housepainter Gordon Williams was ticketed for smoking in his van, which is not illegal, except that it is in his case because there's no smoking in the "workplace" . . . . . A 79-yr-old man, sitting in his car observing the steeple being mounted on the new church in Oklahoma City, was killed when the crane lifting it fell over on top of him . . . . . Patients at the Orthopaedic Hospital in a suburb of Milwaukee are a little nervous, since a half-dozen vultures have begun perching on the window ledges . . . . . There's Your Problem Right There: At a minor-league baseball brawl in Dayton, Ohio, a fan was hospitalized after a pitcher for the visitors, throwing at the Dayton dugout, missed and beaned him [I mean, forget the "strike zone"; that pitcher was missing the whole dugout that night] . . . . . Researchers at the Univ. of Cardiff (Wales) made a big-deal presentation on how city streets need to be designed with drunks in mind because they're in danger if they have to stagger around dark, narrow streets and alleys (Seriously).
Comments 'worry_080725'

Editor's Notes:
It appears that I, er, got the facts, um, backward on Wednesday (July 23). The truck driver committing the sat-nav error from Turkey to Gibraltar actually intended to go to Gibraltar, like Rock of Gibraltar, yet wound up in some rural area called Gibraltar-something-or-other in the UK. Not the reverse. Bad Chuck! Today's Newsrangers: Tom Barker, Sam Gaines, Bob Pert, Jerry Whittle, Matt Mirapaul, Bill McCarthy
Comments 'editors_080725'