Is it music? Is it video art? Is it both? Is it neither?

I'm going with the last statement.

Continuing the WU investigation of unusual bathing suits, here's an aluminum bathing suit from 1966, modeled by Donyale Luna. It was featured in the French film Who Are You, Polly Maggoo? (Qui êtes vous, Polly Maggoo?) which wikipedia describes as "a satirical art house movie spoofing the fashion world and its excesses." 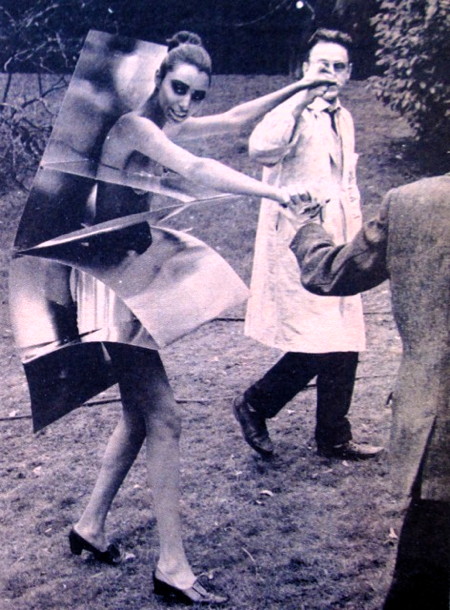 [NOTE: Yr Editor took off last week with NOTW 2.0 and will again tomorrow. I promise to return September 9th. Promise.]

PREVIOUSLY ON WEIRD UNIVERSE: The conflicted double life of Israeli Orthodox Jew Shadar Hadar, 34, might be as formidable to manage as that of an international spy. Though deeply, and defiantly, religious, he typically around midnight “trades his knitted white yarmulke” for a “wavy blond wig and pink velvet dress” and takes the stage as a nascent drag queen, according to an August Associated Press dispatch from Jerusalem. His gayness has alienated his ex-wife (who bars him from seeing their son, now 11) and is only grudgingly accepted by his parents. As a bridge of sorts in his life, he has rejected the usual raunchy drag queen personas and adopted instead that of a female rabbinic advisor musing from the stage on optimistic teachings of Breslow Hasidic ultra-Orthodox Judaism. [Associated Press via Huffington Post, 8-1-2013]

Philadelphia’s Veterans Stadium, whose construction was financed in 1964 by borrowing $25 million (and untold more as part of a subway expansion to service the stadium), was demolished in 2004 and is but a memory to the city’s sports fans. However, nine years later, the city is still paying for it (though next year will retire the $25 million bond and nine years from now, the city hopes, will retire the stadium/subway bond). The city’s deputy controller told PhillyMag.com in June, profoundly, “When issuing a bond to build a facility, the debt payment on that bond should not outlast the facility.” [PhillyMag.com, 6-14-2013]

PREVIOUSLY: Inexplicable: The Oklahoma Department of Public Safety’s solution to its legendary long lines at driver’s license stations was to create “In Line Online” registration, which it introduced recently. Online registrants were beside themselves, however, when they arrived on time across the state, only to learn that “In Line Online” merely entitled them to a reserved place in the line for making future appointments to take their driver’s test. A spokesman acknowledged that “In Line Online” might have some kinks and thus would be closed temporarily. [KFOR-TV, 8-15-2013]

PREVIOUSLY: Toronto is facing such a crippling backlog of challenges to parking tickets, reported the Toronto Star in August, that more than 73,000 citations from last year were still unresolved and that many cases were proceeding even less hurriedly. Mahmood-Reza Arab, a computer programer who was ticketed for parking too close to a hydrant in 2005 and who has dutifully met all deadlines for making a proper challenge, was recently scheduled (again) for trial before a judge--this month (September 2013). A spokesman said the “normal” wait time for a court date is “only” 18 months. [Toronto Star, 8-13-2013]

“Rules Are for the Benefit of Us All”: Adhering to “federal regulations,” the Denver Housing Authority ordered the immediate ejection of the family of Sandra Roskilly (her mother and autistic son)--because Roskilly had been shot dead in a random homicide in
August. The mother, who shared the apartment with Roskilly for 10 years, said she was told that once the head of household is no longer present (no matter the reason), the apartment must be forfeited. Said Roskilly’s astonished brother, “[T]here was no question in my mind that my mother would at least be able to finish out the lease.” [KMGH-TV, 8-19-2013]

Artist John Knuth creates “broad swaths of color that appear to be meticulous impressionistic abstractions,” reported a Gizmodo.com writer in July, but in a video made for the Museum of Contemporary Art in Los Angeles, Knuth revealed that he makes colors with paint harvested from the vomit of about 200,000 houseflies. Knuth raises the flies from maggots, then feeds them sugar mixed with watercolor pigments, then coaxes the flies to regurgitate--and then captures, and uses, the result. Of Knuth’s accompanying high-minded explanations of his purpose, Gizmodo wrote, “Once you decide to make paintings from fly barf, you pretty much forfeit any other subtext you’d like your audience to appreciate.” [Gizmodo.com, 7-15-2013]

Suspicion Confirmed: A British “art critic” created the “Colne Valley Sculpture Trail” in West Yorkshire by inviting patrons to walk a three-mile path past derelict buildings and discarded objects that the critic suggested, in a formal leaflet, were purposeful art objects designed to be provocative. (In reality, they were random junk.) An abandoned bathtub (titled “Wash Behind the Ears”) evoked “contradictory concepts of filth and cleanliness” “in a countryside setting,” the critic wrote. A collapsed wall was built by fictitious artist “Karen Braithwaite,” who then destroyed it “with some sense of violence,” “suggest[ing] a sense of bereavement, the turf above almost seeming to weep.” The author spoke to BBC News in July but insisted on remaining anonymous. [BBC News, 7-28-2013]

Notwithstanding the city of Detroit’s various problems, residents still expect its police force to behave sensibly, but in July, a police commander’s office blundered, releasing to all officers a document concerning an order of form-fitting bullet-proof vests. Each individual officer’s height and weight were on the email, but so were female officers’ bra cup sizes (which were initially necessary to assure body-armor fit so as not to restrict mobility--but obviously were no one else’s business). [WJBK-TV (Detroit), 8-12-2013]

PREVIOUSLY: In August, prosecutors in Broward County, Fla., accused two Lauderhill police officers of an improper 2012 traffic stop, charging both patrolman in the squad car with demanding favors from the two female motorists. Officer Franklin Hartley allegedly demanded oral sex from the driver, and his partner Thomas Merenda, according to the charge, “asked the victim to punch him in the ‘nuts,’ meaning genital area.” Said Merenda’s lawyer, of the charge: “outrageous, outlandish, absurd.” [South Florida Sun-Sentinel, 8-9-2013]

America’s military veterans, whom the country supposedly champions whole-heartedly and insists should be properly compensated for their service and the disruption to their lives) must navigate as many as 613 government forms from 18 different agencies to receive what they are due by law, according to a July study released by the American Action Forum. The principal agency, the Department of Veterans Affairs, claims to have been making great progress over the last few years, but earlier this year acknowledged that, still, about 70 percent of claims (covering 600,000 veterans) have been waiting longer than 125 days for yes-or-no decisions on claims. [Fox News, 7-2-2013]

PREVIOUSLY: Finding an aberrant sexual behavior not previously mentioned in News of the Weird is an exhausting task, but British psychologist Mark Griffiths, of Nottingham Trent University, has succeeded: the eproctophile (a person sexually aroused by the passing of gas). (Though Griffiths' patient, "Brad," is bisexual, it was not clear that he was actually excited by the gas of both genders.) Griffiths told LiveScience.com in July that he plans to study other rare “paraphilic disorders,” including “fire fetish, a blindness fetish, and dacryphilia, or arousal by tears, weeping, or sobbing.” [LiveScience.com, 7-31-2013]

PREVIOUSLY: A computer virus called “Ransomware” has been freezing computers since 2012, the FBI acknowledged, making much work for tech support, but likely never causing the victim to be arrested until Jay Matthew Riley, 21, of Woodbridge, Va., came along. The virus tricks people into thinking the FBI has discovered that they had inadvertently viewed child pornography, and locks their computer, but since the viewing was probably accidental, “allows” them to avoid arrest by paying a $300 fine to unfreeze the computer. Riley apparently did have child porn (inadvertently gathered or not) on his computer and, frightened by the virus, gratuitously inquired at a local police station whether there were warrants for his arrest. No, they said, but in the course of conversation, he consented to a search and was arrested. [Washington Post, 7-25-2013]

Creative Alternate-Site Surgery: Doctors from the University of California, San Diego, and the University of Washington announced in September [2010] that they could just as well handle certain brain surgeries by access not in the traditional way through the top of the skull but by drilling holes in the nose and, more recently, the eye socket. (Since classic brain surgery requires that the top of the skull be temporarily removed, the breakthroughs mean fewer complications.) These innovations follow on the inroads in recent years in performing kidney-removal and gall-bladder surgery not by traditional abdominal incisions but through, respectively, the vagina and the anus. [Science Daily, 9-29-2010]

Thanks This Week to Peter Smagorinsky, Kevin Leaptrot, Sandy Pearlman, and Gary DaSilva, and to the News of the Weird Board of Editorial Advisors.


"It is taken for granted that the honeymoons of that period will be spent in airplanes, and Mrs. Campbell's outfit is distinctly designed for aviation."

"Miss Faith Celli, of London, wore her conception of what the nun of 1980 will wear. It is immediately recognizable as a convent garb, but shown unmistakably the influence of Reinhardt's "The Miracle," particularly in the tall headgear and collar forming plane formation. Several clergymen who saw the costume pronounced it an ideal one, expressing splendidly the simplicity and seclusion of life in a convent of the future."

"It seems to be the more or less general opinion of the women who participate in the ball that the women of the future will go in less and less for skirts. Mrs. Donald Armstrong Jones appeared in a charming walking suit consisting of loose jacket of soft, clinging material, and breeches marking a complete departure from the present day 'plus-fours.'" 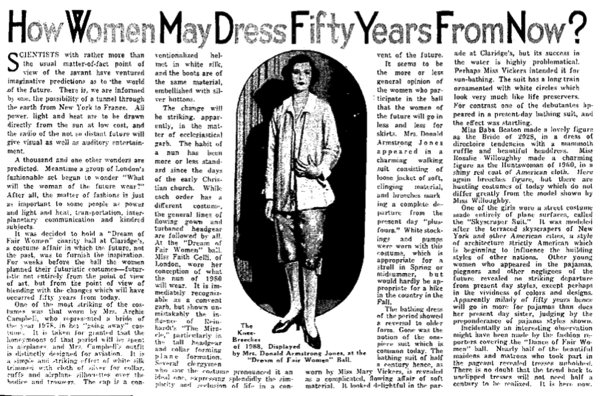 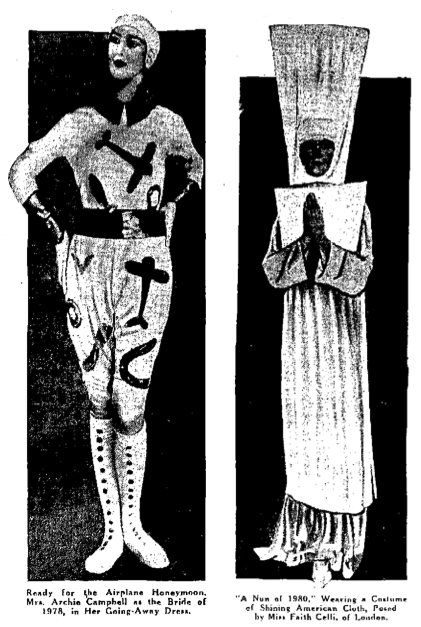