...Passport.
17 year old Jon Meier missed out on his Spanish class trip to Peru because some of the numbers on his passport were unreadable. Airport Security was unmoved by his reason for the damaged document. The family's one year old golden retriever, Sunshine, had apparently been chewing on it. To bad Sunshine didn't prefer shoes. http://www.msnbc.msn.com/id/31663499/ns/travel-news/

...Checks.
Kristin Banfield is in a little trouble for paying her bills from her ex-hubby's account. But she does have a good reason, Her dog ate her checks. So of course she had to use her ex's account to get the bills paid. The cops aren't buying it though. She's under investigation for identity theft and forgery.
http://www.msnbc.msn.com/id/31667929/ns/us_news-weird_news/

It's amazing to me the creative ways ad agencies get me to drink Pepsi.

Grasshopper, when you can take the Pepsi from my hand...

Let’s All Go To The Lobby 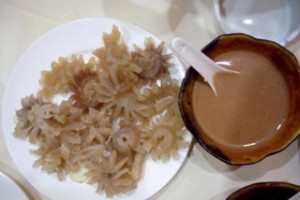 If you can never remember to water house plants than you can buy this one called The Botanicals Twitter plant system. Whenver it needs to be watered it'll give you a message on Twitter and when you do water it it'll give you another message saying Thank you. You can buy it on this site: 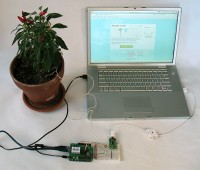 A while ago I showed you the biggest remote. I have now found the biggest computer keyboard. It was made by Marin Donneaud. There isn't anywhere you can buy this but you can see how it was built at this site: 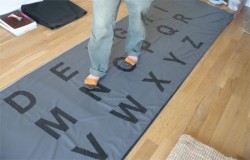 For some reason he didn't make it a QWERTY keyboard.

The COMMENTS feature for the SELECTAVISION entry has been reactivated, thanks to Alex. So if you had comments bottled up, now's your chance.