A spoon made of tiny spoons 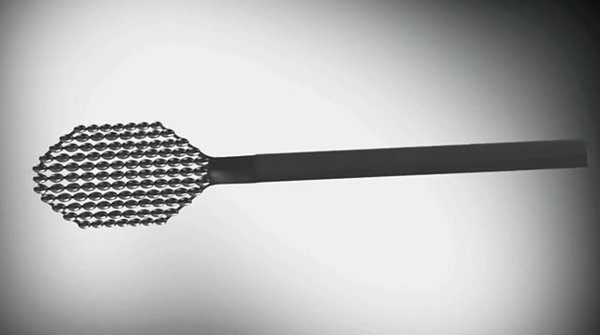 Other Nonobjects include "a 'superpractical' cell phone with keypad, speaker, and microphone on every surface," a square motorcycle, and an umbrella that sends rain rushing through the handle from an upturned top. More at the site nonobjectbook.com. 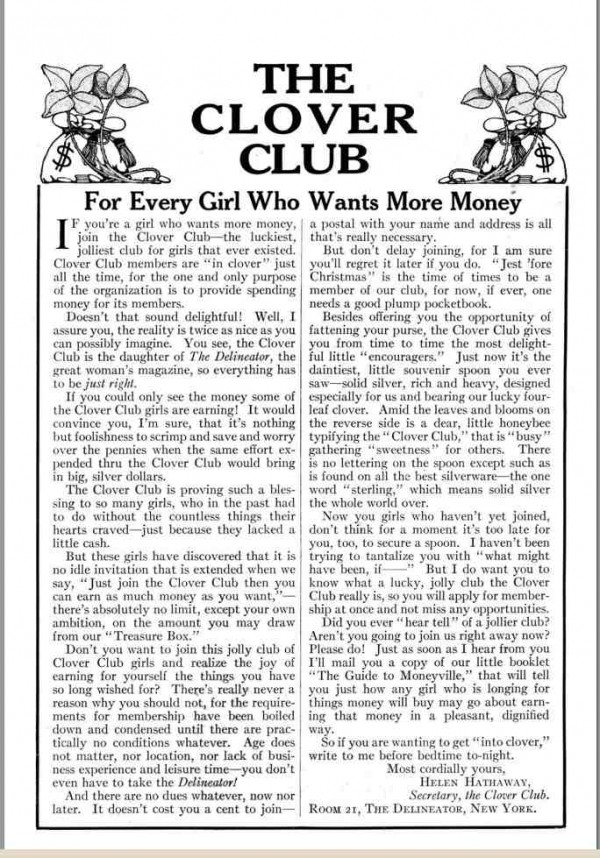 I've posted before about a typewriter artist, but here's another one — Alvaro Franca of Rio de Janeiro.

But I noticed that Franca uses a computer image to guide him. Isn't that like the typewriter art version of paint-by-numbers?

The Art of the Diseuse

Not sure these recorded performances capture whatever unique brilliance these performers were reputed to exhibit.

In the December 21, 1935 edition of the Pittsburgh Post-Gazette an entertainment columnist wrote: “The English language does not contain a word which perfectly describes the performance of Ruth Draper, who comes to the Nixon next Thursday for the first time in several years to give a different program at each of her four performances here. “Speaking Portraits” and “Character Sketches” are the two terms most frequently applied to Miss Draper's work; and yet it is something more than that. “Diseuse” is the French word, but that is more readily applicable to an artist like Yvette Guilbert or Raquel Meller. Monologist is wholly inadequate. The word “Diseuse” really means “an artist in talking” so that may be the real term to use in connection with Miss Draper.” Actresses who have been called noted diseuses over the years include Yvette Guilbert, Ruth Draper, Joyce Grenfell, Cornelia Otis Skinner, Lucienne Boyer, Raquel Meller, Odette Dulac, Beatrice Herford, Kitty Cheatham, Marie Dubas, Claire Waldoff, Lina Cavalieri, Françoise Rosay, Molly Picon, Corinna Mura, Lotte Lenya.

Marty the Mouse became famous in 1974 after he made a home for himself in a box of marijuana stored in the evidence room of the San Jose, CA police station. Police were only able to lure him out by baiting a trap with marijuana seeds. (He ignored bacon, peanut butter, cheese, and a female mouse called Mata Hairy.) He became known as Marty the Marijuana Mouse.

But instead of killing him, he was first sent to UCLA to aid in studies of marijuana. Then he was returned to San Jose where he became a police mascot. When he died in Nov 1975, the nation mourned. 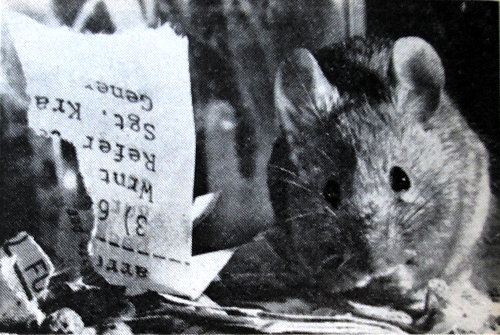 Dutch inventors Bart Jansen and Arjen Beltman struck again recently when Pepeijn Bruins, 13, called on them to help him grieve over his pet rat, Ratjetoe, who had to be put down because of cancer. Having heard of the inventors' work, Pepeijn asked if they could please have Ratjetoe stuffed and turned into a radio-controlled drone. Jansen and Beltman, who had previously created an “ostrichcopter” and are now working on a "turbo shark," created Pepeijn’s rat-copter but remain best noted for their epic taxidermied cat, “Orvillecopter,” created in 2012. [BBC News, 9-10-2014; Daily Mail (London), 9-11-2014]

How to Confuse an Arizonan: In August, a state appeals court overruled a lower court and decided that Thomas and Nancy Beatie could divorce, after all. The first judge had determined that their out-of-state marriage was not valid in Arizona because they were both women, but Thomas has had extensive surgery and hormone therapy and become a man--although he is also the spouse who bore the couple's three children, since he made it a point to retain his reproductive organs. [Associated Press via KSAZ-TV (Phoenix), 8-14-2014]

In August, for the 12th straight year, a group of Japanese adult-film actresses have volunteered their breasts to raise money for an AIDS-prevention charity event shown on an X-rated cable TV channel from Tokyo. The 12-hour-long "squeeze-a-thon" ("Boob Aid") sold individual fondles to men for donations of at least (the equivalent of) $9, with donors required first to spray on disinfectant. In all, 4,100 pairs of hands roamed the nine actresses. [Agence France-Presse, 8-31-2014]

Regulatory filings revealed in August that AOL still has 2.3 million dial-up subscribers (down from 21 million 15 years ago) paying, on average, about $20 monthly. Industry analysts, far from rolling on the floor laughing at the company's continued success with 20th-century technology, estimate that AOL’s dial-up business constitutes a hefty portion of its quarterly "operating profit" of about $122 million. [Quartz, 8-6-2014]

Commentators have had fun with the new system of medical diagnostic codes (denominated in from four to ten digits each) scheduled to take effect in October 2015, and the “Healthcare Dive” blog had its laughs in a July post. The codes for "problems in relationship with in-laws" and "bizarre personal appearance" are quixotic enough, but the most “absurd" codes are "subsequent encounters" (that is, at least the second time the same thing happened to a patient) for events like walking into a lamppost, or getting sucked into a jet engine, or receiving burns from on-fire water skis, or having contact with a cow beyond being bitten or kicked (since those contacts have separate codes). Also notable was S10.87XA, "Other superficial bite of other specified part of neck, initial encounter," which seems to describe a "hickey." [HealthcareDive.com, 7-15-2014]

More Drivers Who Ran Over Themselves: In June, Robert Pullar, 30, Minot, N.D., subsequently charged with DUI, fell out of his car and was run over by it. In July, Joseph Karl, 48, jumped out of his truck to confront another driver in a road rage incident in Gainesville, Fla., but as he pounded on that driver’s window, his own truck (negligently left in gear) crept up and ran him over. Pullar and Karl were not seriously injured, but in July, a 54-year-old St. Petersburg, Fla., man was hurt badly when, attempting to climb onto the street-sweeper that he operates for the city, he fell off, and the machine ran over his upper body. [KXMC-TV (Minot), 6-23-2014] [Gainesville Sun, 7-23-2014] [Bay News 9 (St. Petersburg), 7-22-2014]

For patients who are musicians, "Deep Brain Stimulation" (open-brain) surgery can provide entertainment for operating-room doctors as they correct neurological conditions such as hand tremors. In September, the concert violinist Naomi Elishuv, who has performed with the Lithuanian National Symphony Orchestra, played for surgeons at the Tel Aviv Sourasky Medical Center so they could locate the exact spot in the brain for inserting the pacemaker to control the hand-trembling that had wrecked her career. (In fact, last week's winner of the annual Steve Martin Prize for Excellence in Banjo and Bluegrass, Eddie Adcock, 76, had finger-picked some tunes in the operating room in 2007 for his own Deep Brain surgery.) [Huffington Post, 9-11-2014] [New York Times, 9-16-2014]

Buddhists continue to believe in the wholesale "mercy release" of living creatures, with smaller and less consequential animals making even stronger statements of reverence, according to a July New York Times dispatch from Yushu, China, describing the freeing of river shrimp the size of a fingernail clipping. These specks of life, an advocate told the Times, "could very well be the reincarnated souls of relatives” who perished in the 2010 earthquake that demolished the local area. "We” workers, said another, “have the same feelings as the fish," alluding to his own occupation of "digging in the mud." [New York Times, 7-25-2014]

Surgeons at the University of Arizona Medical Center removed a 47-lb. tumor from a woman's stomach in April--not even close to being the largest ever mentioned in News of the Weird but likely the only such large tumor appearing in a post-operative photograph being cradled in the arms of a member of the surgical team. (The patient, without insurance, had been putting off the surgery for months, which allowed the tumor to grow and to complicate the surgery--but credits "Obamacare" with finally allowing her to afford the procedure.) [Tucson News Now, 6-23-2014]

Previous reports of obsessively vengeful ex-lovers seem concentrated in Japan, where some heartbroken girlfriends have relentlessly harassed their exes with thousands of phone calls for months after the break-up. However, in a September report from Rhone, France, a 33-year-old man was sentenced to prison for 10 months for harassing his ex-girlfriend with a total of 21,807 phone calls and texts over the 10 months following the split (an average of 73 a day). The man insisted that he only wanted the woman to thank him for the carpentry work he had done on her apartment. [Agence France-Presse via The Guardian (London), 9-5-2014]

Size Matters (Sometimes): It’s not the first time that a suspect has had the idea, but usually judges are skeptical. This time, a court in Leer, Germany, ordered a medical examination of the manhood of Herbert O., 54, to help decide a criminal charge of exhibitionism. The man’s wife testified that Herbert’s organ is “too short to hang out of [his] trousers,” as claimed by the victim of the flashing. The judge asked a local health official to make an exact measurement. [The Local (Berlin), 8-22-2014]

Clues at the Scene: (1) Alfred J. Shropshire III was charged in June with burglarizing a home in Lakewood, Wash., identified by his having accidentally dropped at the scene a plaque from a local Mazda dealer naming “Alfred J. Shropshire III” Salesperson of the Month. (2) John Martinez, 68, was arrested for allegedly robbing a Wells Fargo bank in Denver, Colo., in July, having been identified by bank personnel who remembered that the robber wore a black T-shirt with “John” on it and in part because video revealed that a silver Honda registered to “John Martinez,” was waiting outside for his getaway. [KOMO-TV (Seattle), 6-13-2014] [KMGH-TV (Denver), 7-23-2014]

Most victims seemed baffled or only modestly distressed by the obsession of Sherwin Shayegan, 27 (with one describing him as "completely harmless"). Shayegan’s perversion is that, from time to time (allegedly dating to at least 2006), he befriends high-school male athletes, questions them in the locker room as a reporter would, and then, after distracting them with the inquiries, jumps on the athletes’ backs and demands piggyback rides. No other overtures are made, and no injuries have been reported, and the principal complaint about Shayegan is his obnoxiousness. His latest arrest took place in May [2010] in Tualatin, Ore., near earlier incidents in Washington state. [Tigard Times (Tigard, Ore.), 5-6-10] [Grantland.com, 7-13-2012] 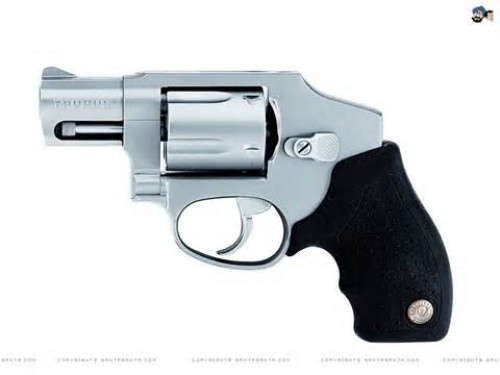 "Wearied of a life of egg frying," the unfortunate Jim Smith decided to end it all. But despite trying to torch, hang, poison, and shoot himself simultaneously, his plan didn't succeed.

I'm skeptical that this ever happened. It sounds like the kind of thing reporters used to make up to pad newspaper columns. From The Seattle Star - March 24, 1922. (via Weird Shit in Historic Newspapers) 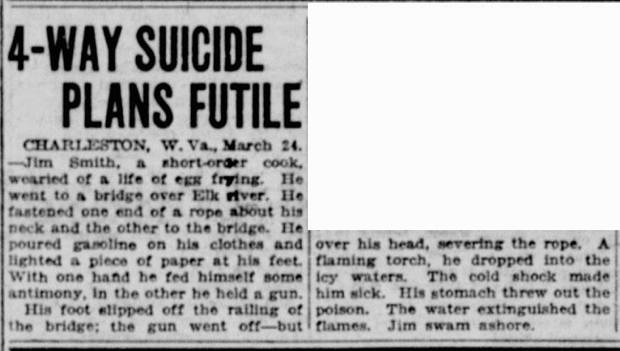