Aravindan Thirunavukarasu wrote letters on a wall by peeing on the wall. Then he developed a font based on his pee letters. And he invites everyone to download his pee font from his website, The Art of Peeing. [via CityLab] 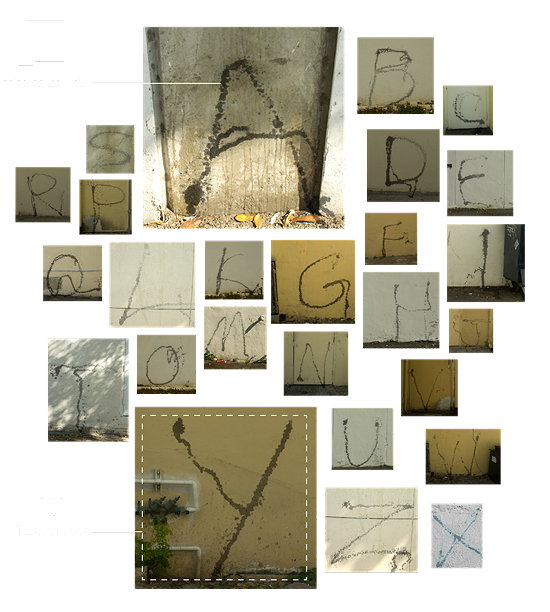 This is not an anthropomorphic Miss Piggy in her ballgown and gloves. It's a barnyard-realistic pig dressed for the bedroom. Make of it what you will.

Back in the 1980s, Betty Burlan Burian Kirk got the idea of starting a business spinning dog-hair yarn. Her clients were people who "want to wear something from their dog." She said it was "becoming more and more popular." 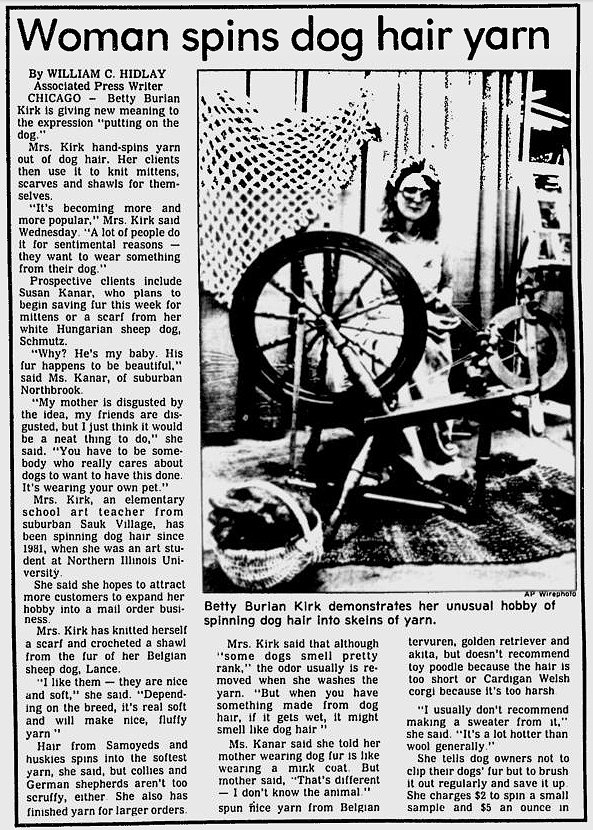 The Tuscaloosa News - Oct 20, 1987
Has the trend of "wearing your pet" continued to grow in popularity since the 80s? Well, here at WU we've posted before about people who wear dog-fur sweaters. So maybe it is a popular thing.

And though Betty Burlan Burian Kirk no longer seems to be in business, a quick google search pulls up plenty of places (such as here) that'll spin your dog's fur into yarn for you, if that's what floats your boat.

Update: So her middle name is "Burian", not "Burlan". And she's still in business. Her website, bbkirk.com, offers plenty of info on dog hair — how to collect it, wash it, pricing, etc. Plus, she has a Gallery of Dog Hair Items.

Julian Assange, the Wikileaks publisher of state secrets and who remains holed up in the embassy of Ecuador in London, has signed on with an Icelandic licensing agent to sell Assange-branded high-end clothing, shoes, and various household goods in India and much of Europe and is negotiating to put his logo on apparel in Japan and the U.S. The agent told the New York Times in October that “Wikileaks” and “Assange” “can be as big as Coca-Cola.” A 46-page book sets out licensing standards (e.g., no tacky slogans, such as “We Steal Secrets”) and includes the one approved Assange portrait (an “idealized line drawing” of him “gazing soulfully into what is presumably a better future,” wrote the Times). [New York Times, 10-23-2014]

A Practical Use for Trigonometry: When a stampede killed pigs and induced sows’ abortions on a farm near York, England, two years ago, the operator of a noisy hot-air balloon denied responsibility, referring to a court order keeping balloons 500 meters away. Using GPS coordinates and the location of dead pigs, a mathematics professor at York University (employing trigonometry, he said) proved that the balloon could not have been more than 300 meters away. After the professor “showed his work” on the word problem, the balloon’s insurer upped the settlement to almost four times its initial offer. [The Northern Echo (Weybridge, England), 10-13-2014]

Lucky Dog Retreat Rescue in Indianapolis reported in October that, even after many heroic saves, they had never heard of a dog like Adam, who is apparently allergic to humans. Following a blood test to determine why he remained so sickly despite therapies, a doctor reported that Adam is allergic to human dander, and researchers told WRTV that a special serum was being prepared. [WRTV (Indianapolis), 10-14-2014]

Things You Thought Would Happen

Britain’s The Guardian reported in October that repairing the “fashion” holes in earlobes is one of the fastest-growing cosmetic procedures in the UK, as “millennial generation” radicals tire of their half- to 3/4-inch, see-through lobes. Doctors charge up to $3,000 to remove the entire area around the hole (originally created by stretching the tissue) and connect the healthy parts back so they fuse together. (A Hawaiian man, not currently a patient, supposedly has the largest ear hole, nearly four inches in diameter.) [The Guardian, 10-18-2014]

Plausible: (1) George Byrd IV was charged in September in Middletown, Pa., with shooting a gun into an occupied structure when he fired a round that accidentally broke a neighbor’s window. Byrd told police that he fired because it was the only way he knew to “unload” the gun. (2) Police in Bayonne, France, were contemplating charges in October against Kappa Clinic anesthetist Helga Wauters, 45, after a patient died from an improperly placed breathing tube. Wauters, appearing inebriated, said she requires vodka so that she doesn’t “shake” when she works. (3) Linda Roche, 41, was arrested in Jackson County, Miss., in October allegedly burglarizing students’ cars at East Central High School. She told police she was only searching out “members of ISIS.” [Bucks County Courier Times, 9-27-2014] [The Local (Paris), 10-14-2014] [Sun Herald (Biloxi, Miss.), 10-3-2014]

“Too Stupid”: When UK newspaper executive Rebekah Brooks was arrested in 2011 in the notorious “News of the World” phone-hacking case, so was her husband. Charles Brooks was ultimately acquitted by convincing a jury that he is “too stupid” to have been part of such a complicated case. However, in October 2014, after Charles petitioned under British acquittal rules to have his legal fees reimbursed, Judge John Saunders turned him down--citing Charles’s admitted stupidity in causing prosecutors to suspect him in the first place. (As Rebekah was being arrested, Charles aroused suspicion by clumsily trying to hide his pornography collection in a parking garage.) [New York Times, 10-16-2014]

A man named John Thornton was arrested in October after, for some reason, grabbing a mop from an employee at the Double Tree Hotel in Bristol, Conn., and (according to the police report) “aggressive[ly]” mopping the floor in a threatening manner, backing the employee into a corner and mopping over her shoes). [Hartford Courant, 10-14-2014]

Ernest Angley, 93, is the latest televangelist to see his empire challenged--following his July denial (from the pulpit of his Grace Cathedral in Cuyahoga Falls, Ohio) that he is homosexual and that he inappropriately touched some parishioners (as they have claimed). However, Angley freely revealed an intense interest in vasectomies--that he had long encouraged his flock not to bring offspring into this troubled world. Of young men, Angley said, “Sure, I’d have them uncover themselves [during vasectomy counseling], but I did not handle them at all.” “I would look at them, their privates . . ..” A once-prominent Angley insider said the “prophet” “doesn’t want people to have kids because it would take their time and money away from [the church].” [Akron Beacon Journal, 10-15-2014]

He Works in Strange Ways: (1) A 34-year-old mother of two, walking in Chicago, was killed in September when a stone gargoyle fell from the historic Second Presbyterian Church and hit her on the head. (2) Two women survived their car’s being crushed by a 100-pound boulder as they drove on a parkway in Corner Brook, Newfoundland, in September, and credited the Lord. “God was with the both of us,” one said. (According to authorities, the boulder came loose from whatever caused recent heavy rains.) [DNAInfo (Chicago), 9-4-2014] [Canadian Broadcasting Corp. News, 9-24-2014]

Owen Reese, 22, was arrested in October in Sparta, Wis., for reckless endangerment when he answered a door knock by fundraising Cub Scouts by swinging a sword wildly. Reese told police that he “always” answers the door with his sword--to protect himself “against religious people.” [The Smoking Gun, 10-3-2014]

South Carolina is one of at least 20 states to have enacted “stand your ground” defenses for use of deadly force, but prosecutors in Charleston are refusing to recognize it in one logical category--“standing your ground” in the home, against life-threatening assaults by one’s spouse. The legislative history of the South Carolina law, and a recent state Supreme Court decision, show (said a prosecutor) that it was only to be used against intruders and not against people with a right to be there, even to ward off a vicious assault by, for example, a husband against a wife. [Post and Courier (Charleston), 10-12-2014]

(1) It’s just a parody, said the authors of the “Hipster Hitler” comic book (depicting Der Fuhrer wearing dark-rimmed eyeglasses and playing Pac-Man), but a UK organization still threatened in September to shred all copies if booksellers continued to stock it. (2) A spokesman for the Swiss retail firm Migros said he had no idea why Hitler’s face appeared recently on a batch of the company’s restaurant coffee-creamer pods (and said a recall had been ordered). (3) A restaurant manager in New Taipei City, Taiwan, apologized in August for naming a dish “Long Live the Nazis”–claiming she had no idea “Nazi” was so controversial. (4) The chief official of a hamlet 70 miles south of Paris told Agence France-Presse in August that there was no reason to change the name it has used since the 11th Century: “La Mort aux Juifs” (“Death to Jews”). (However, in May a village in Spain finally changed its name from “Castrillo Matajudios” (“Camp Kill Jews”). [Daily Mail (London), 9-20-2014] [New York Times, 10-22-2014] [Wall Street Journal, 8-19-2014] [Agence France-Presse via Yahoo News, 8-12-2014]

Lack of Foresight: (1) Jonathan Warrenfeltz, 24, and a buddy were charged with robbing five sunbathers in Dania Beach, Fla., at gunpoint in October. Police quickly picked up the two based on a lookout for the only man around with the word “Misunderstood” tattooed in large letters across his forehead (as Warrenfeltz had). (2) Brandon Aaron, 27, charged with statutory rape of a 15-year-old girl in Panama, Okla., in October, initially denied having sex, but changed his story when the girl remembered that her attacker had the name of an ex-girlfriend tattooed on his penis (as Aaron had). [South Florida Sun-Sentinel, 10-9-2014] [Tulsa World, 10-3-2014]

Thanks This Week to Stan Kaplan, Lynne Morris, and Gerald Sacks, and to the News of the Weird Board of Editorial Advisors.

It's a scooter that you can wear as a belt when you're not using it. (Though I wonder how well it functions as either a scooter or a belt.) More info at behance.net. 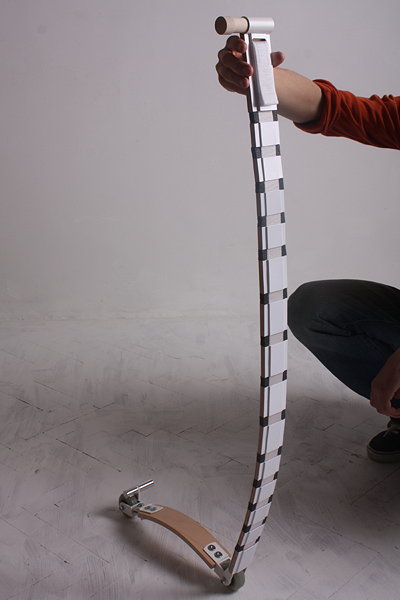 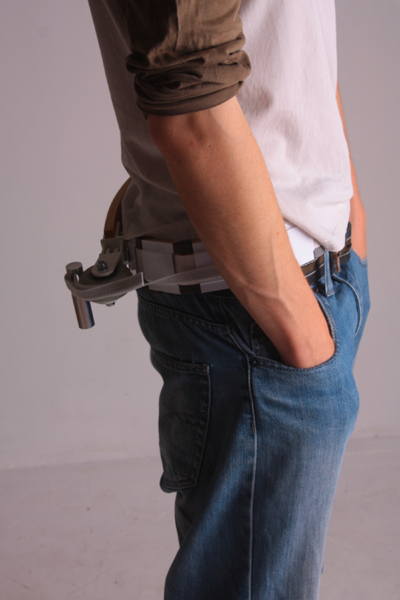