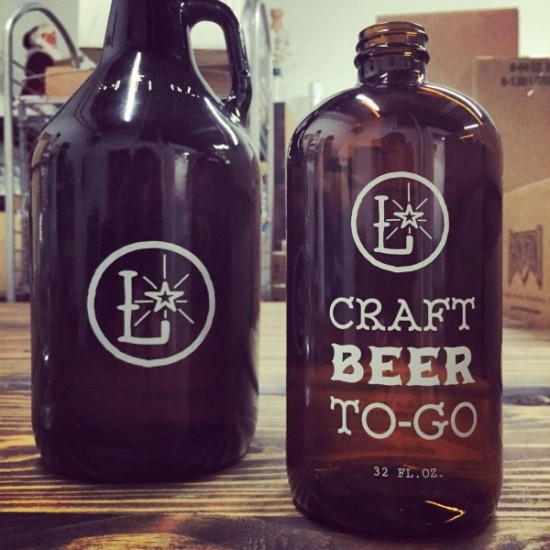 Kroger is expanding the number of stores that offer craft beer on tap for tasting and for sale in growlers, like the ones pictured above. Now cops can start setting up DUI checkpoints up the street from the local grocery store.

I just got back yesterday from a two week vacation in New Zealand (aka The Land of Many Sheep). Robo-Alex was surreptitiously posting for me while I was gone, since I figured it wasn't a good idea to announce to the world that I was traveling and my house was empty. My wife and I drove around the North and South Islands, then concluded by attending a relative's wedding in Queenstown.

One sight we saw, which seemed WU-worthy, was the Steampunk HQ in the small town of Oamaru (population 13,000). I was hoping it might feature a giant statue of Paul — but it turned out not to include any references to literary Steampunk, but was instead a museum filled with strange steampunk-themed art.

My favorite part of it was the "Portal Room," which was a mirror-walled infinity room. When you pressed a red button, a brief sound-and-light show played. Since there weren't many people at the museum, my wife and I got to experience the portal room a number of times. 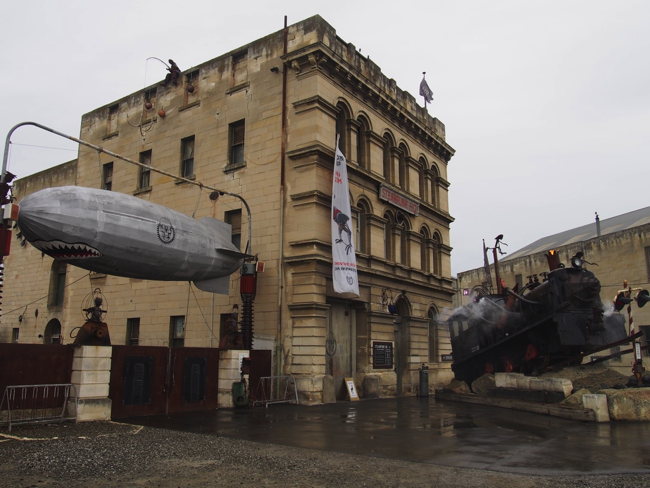 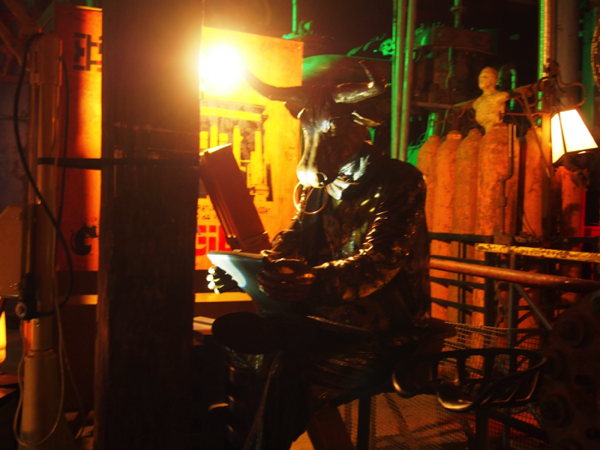 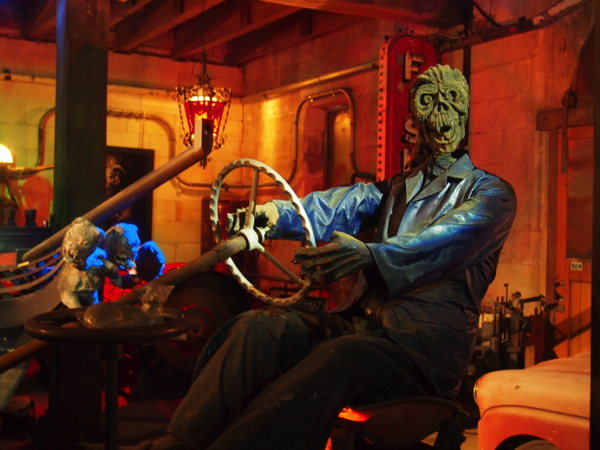 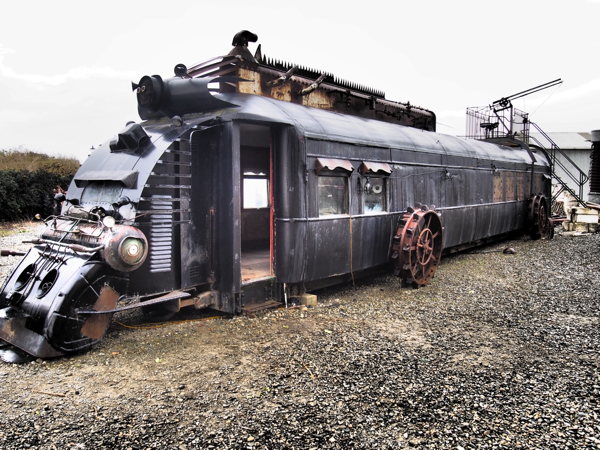 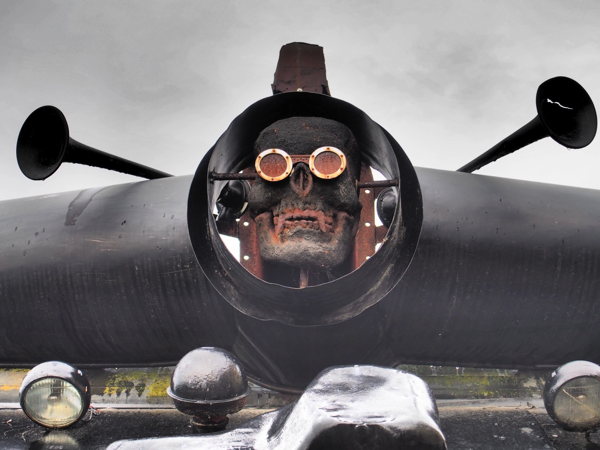 And shouldn't a fabric named "Glo-Weave" have some shine-in-the-dark properties?

British director Missouri Williams brought an adaptation of Shakespeare’s “King Lear” to the London Courtyard art facility in August for a one-week run, centered on a human actor struggling to stage the play using only sheep. The pivotal character, Lear’s daughter Cordelia, famously withholds flattering Lear (thus forgoing inheriting the kingdom), and her silence forever tortures Lear--and of course silence is something sheep pull off well. Actor Alasdair Saksena admitted there is an “element of unpredictability with the sheep” but lauded their punctuality, calmness, and lack of fee demands. Williams promised another Courtyard run for “King Lear With Sheep” in the fall. [New York Times, 8-11-2015; Islington Gazette, 8-12-2015]

The U.S. Patent and Trademark Office in Alexandria, Va., has an award-winning “telework” program allowing patent examiners flexible schedules, leading half of the 8,300 to work at home full-time--despite a 2014 Washington Post report on employees gaming the system. In August, the agency’s inspector general exposed several of the most ridiculous cases of slacking off, including one examiner who was paid for at least 18 weeks’ work last year that he did not perform and that his manager did not notice. (The examiner, who had been issued nine poor-performance warnings since 2012 and who had flaunted his carefree “workday” to co-workers for years, abruptly resigned two hours before a meeting on the charge and thus left with a “clean” personnel record.) Wrote the Post, “It’s a startling example of a culture that’s maddening . . ..” [Washington Post, 8-21-2015]

Only China and Iran execute more prisoners, but Saudi Arabia also has a soft side--for jihadists. Saudis who defy a ban on leaving the country to fight (usually against the common enemy, Syria’s al-Assad) are, if they return, imprisoned at a maximum-security facility in Riyadh, but with liberal short “vacations” at “Family House,” hotel-quality quarters with good food, playgrounds for children, and other privileges (monitored through guest-satisfaction surveys). Returning jihadists also have access to education and psychologists and receive the equivalent of $530 a month with ATM privileges. The purpose is to persuade the warriors not to return to the battlefield once released, and officials estimate that the program is about 85 percent effective. [Bloomberg Business, 7-8-2015]

Impersonating a police officer in a traffic stop is not uncommon, but Logan Shaulis, 19, was apparently so judgment-impaired on May 30th that he set up his own elaborate “DUI checkpoint” on route 601 near Somerset, Pa., complete with road flares, demanding “license, registration, and insurance” from driver after driver. The irony of the inebriated Shaulis judging motorists’ sobriety was short-lived, as real troopers soon arrived and arrested him (on DUI, among other charges). [Associated Press via WGN-TV (Chicago), 6-2-2015]

A woman identified only as Zeng, age 39, was finally imprisoned in August in Urumqi, China--10 years after she was convicted of corruption. Availing herself of a traditional “probation” option in Chinese law for expectant mothers, Zeng had remained free by getting herself pregnant (and proving it) 14 times during the ten years (although only some of the fetuses were carried to term). [People’s Daily Online via Daily Mail (London), 8-13-2015]

The president of the University of New Hampshire publicly complained in July about the “bias-free language guide” posted on the school’s website--since, he said, it denounces use of such words as “Americans” (as insensitive to South Americans), “seniors” (better, “people of advanced age”), “rich” (should be, “person of material wealth”), and “poor” (change to, “person who lacks advantages that others have”). (One state senator mockingly suggested changing the state’s “Live Free or Die” motto to “Live Free But Upset No One.”) [WMUR-TV (Manchester), 7-29-2015]

The Americanization of China

After five students drowned while swimming in a reservoir in China’s Yunnan province, parents of two of them sued the reservoir’s management company, complaining that it should have posted signs or barricades or, even better, guards to keep kids from frolicking in the dangerous waters. According to an August report, the management company has now countersued the parents, demanding compensation for the additional water-treatment measures it was forced to undertake because he reservoir had been “polluted” by their children’s corpses. [The Shanghaiist, 8-20-2015]

(1) A female Yangtze giant softshell turtle, believed to be the last female of her species, was artificially inseminated in May at Suzhou Zoo in China through the efforts of animal fertility experts from around the world. She is thought to be more than 100 years old (as was the last male to “romance” her, although their courtship produced only unfertilized eggs). (2) The Times of London reported in July that Briton Pamela Horner, seeking her “escaped” tortoise Boris (even though, as they say, he couldn’t have gone far), found “tortoise porn” on YouTube (mostly, mating sounds) to play in the yard and lure him back. A tortoise expert told The Times, “They make quite a lot of noise. We can hear them groaning for miles.” [San Diego Zoo press release, 5-24-2015] [The Times of London, 7-9-2015] [TheWeek.co.uk (The Times has a paywall)]

(1) Wrong Place, Wrong Time: Late one night in July, police in Phoenix were chasing a speeding truck whose driver eventually lost control and careened into a house near Mulberry Drive. As officers were checking for victims (it turned out no one was home), they discovered a large quantity of suspected marijuana--and opened an investigation of the super-unlucky residents. (2) Right Place, Right Time: Shane Peters’s cherished 2004 Dodge Durango broke down on the road in Livingston, Tex., in June, but before he could return to tow it, a thief hauled it away. About a month later, Peters spotted the familiar Durango in town and with the help of police got it back--with (courtesy of the thief) a newly-repaired drive shaft and three new wheels (and the thief’s drug supply, but police seized that). [KPHO-TV, 7-10-2015] [KHOU-TV (Houston), 7-13-2015]

The Michigan legislature and the state Court of Appeals (as News of the Weird reported in December) have, for some reason, given its “concealed-carry” gun licensees the additional right of “open-“ carrying weapons on school grounds, and in August, a judge in Genesee County upheld that interpretation. Asked a lawyer preparing to appeal the decision, “If I’m a principal” and see someone “walking up to my building with a gun, what am I supposed to do?” He should, he said, “declare a lockdown . . . call the police.” However, the open-carry parent who had been denied access to the school said the court ruling in his favor was just “common sense.” [Detroit Free Press, 8-11-2015]

Number One in the News: Fukuoka Prefectural Police arrested two officials at a video company in June, along with three “actresses,” in the making of videos of the three seated on the floor of trains in the Nishi-Nippon Railyard and urinating. Police said they were acting on complaints of DVD customers (who, after all, had selected the disks from the video company’s “inappropriate urination” category but nonetheless complained to the Railyard). [Tokyo Reporter, 6-23-2015]

News of the Weird Classic (October 2009)

The human brain's 100 billion neurons may have such specific functions that a few electrically charge only upon recognition of a single celebrity, such as Oprah Winfrey or Bill Clinton. UCLA researchers, studying the healthy cells of pre-op epilepsy patients, inadvertently discovered this property, which apparently varies with individuals but remains internally consistent (recognizing the celebrity’s name, picture, name, or sound). Patients were presented "hundreds of stimuli," one researcher told the Wall Street Journal in October [2009], but "the neuron would respond to only one or two." For example, neurons were found that reacted only to Jennifer Aniston, only to Mother Teresa, only to characters on "The Simpsons." [Wall Street Journal, 10-9-2009]

Thanks This Week to Jim Moir and Edward Hess, and to the News of the Weird Board of Editorial Advisors. 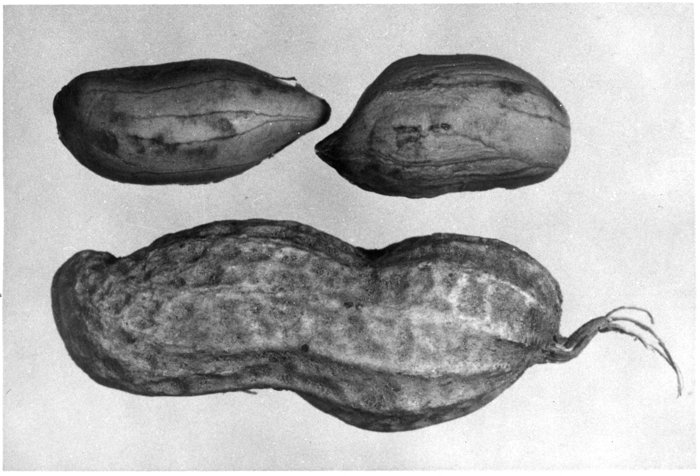 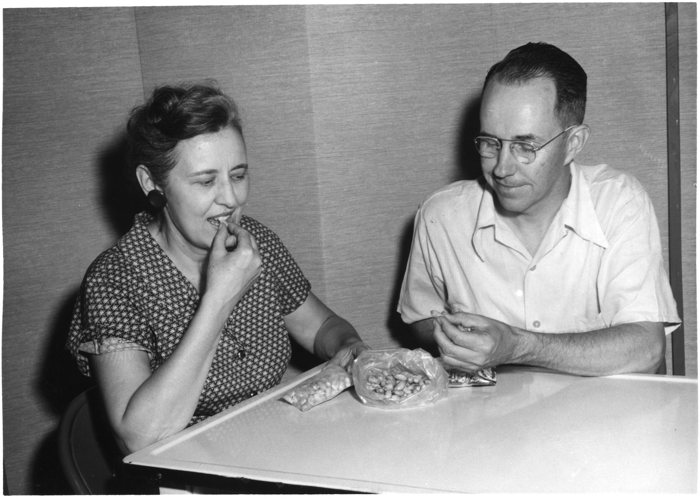 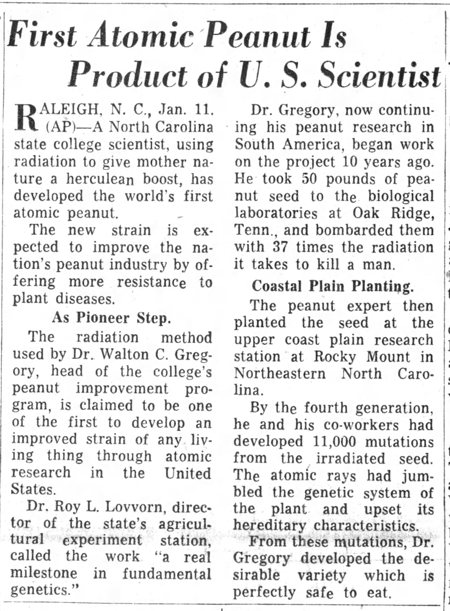 This Is Your Dog On Meth!

Little Guy, a mixed breed terrier, found his owner, Marty Rogers', meth stash and ate some. When Little Guy got sick Marty took him to the vet where he tested positive for meth(of course). The vet turned him, Marty not Little Guy, in to police who then searched their home. They found that Little Guy was polite and left some of the meth for the nice policemen to find, as well as a stolen motorcycle. Both Marty and Little Guy are going to get new homes. One is going to the county pound and the other to the county jail. 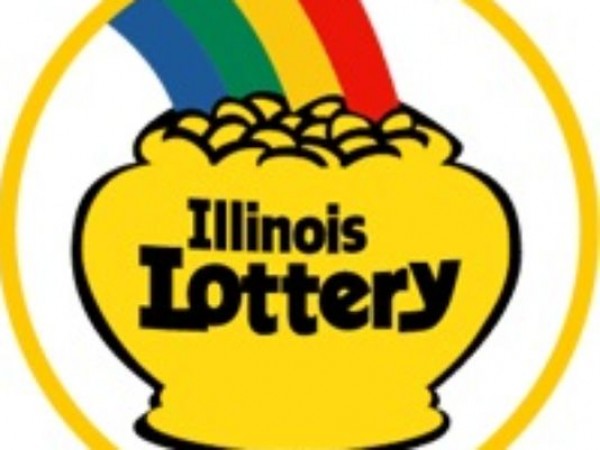 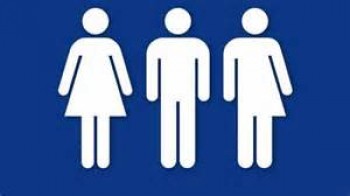