How many punch cards do you think it took to make these 3 minutes? Anyone out there with enough experience from 40 years ago to tell us how many cards it would take? Or did they have to use cards?

Here's a screenshot from the web site.

Yes, they were technically insane.

Pig Tails from Foodtease.com on Vimeo.

Even the most dedicated WU-vie bacon lover might balk at these. And where the heck does one even purchase pig tails?!?

Third in our recent series on "weird claymation."

Rooster-Fighters Under Siege, Plus No Friending the Grizzlies and the Glory of Muck

Nightmare in Phoenix: You're minding your own business running a little suburban cockfighting emporium until, whoa! . . Here comes the cavalry! . . Sheriff Joe! . . He's got a tank! . . Armored vehicles! . . Rolling over neighbors' lawns! . . And with his head sticking out of the tank (Michael Dukakis-style)--Steven Seagal! KPHO-TV

The Tea Party Has Washington Under Control: Federal government managers no longer dare wasting money hiring people at ridiculous salaries to do non-totally-necessary jobs! have job openings for people to run the Facebook page at the Department of the Interior ($115,000/yr), to be mailroom clerk at the Pentagon (almost $50,000/yr), to be student intern at the Federal Housing Finance Agency ($48,000/yr), and to be equal opportunity compliance officers and the Peace Corps ($155,000/yr) and the Department of Transportation (nearly $180,000/yr). Daily Caller

There Will Be Blood: Julie Sygiel and Brown University classmate Eunice Png [Bonus: not a typo!] have apparently solved a girl-type problem that America's top corporations have failed at until now. Their company (Sexy Period) creates hottie underwear, durable and leak-proof enough to be worn during curse time, even "heavy" curse time. Brown Daily Herald

"Blanket Party" Beatdown, Tonight, Indianapolis, Be There!: Jacob Barnett, 12 (and 170 IQ), knows more than I and all y'all put together, in higher math, quantum physics, advanced astronomy. He's let the air out of the Big Bang, is working some glitches out of Einstein's Theory of Relativity, and says he'll let us know soon what really happened to create "time." "It didn't come from me," said his mother. "I flunked math." Best guess by doctors is that he's an Asperger's outlier, but Yr Editor is not ruling out "pod person from another dimension." Indianapolis Star

All Things Dirt: "Filth, fecal matter, and grime in all [their] forms are the subject of a new exhibition in London," reported Reuters (200 exhibits, ranging from dust and urine to vials of historic crud and odes to famous pillars of sewage and medical scum). "Dirt, the Filthy Reality of Everyday Life" is now playing at the Wellcome Collection. "I want people to leave with an expanded awareness of dirt," said the curator. Reuters via Yahoo News

At least for now Maine has bested Pennsylvania in who made the largest whoopie pie, chocolate cakes with creamy frosting between them. There is still the question of where the treat originated though. Maine claimed to be the home of the whoopie pie, but PA says not so, it originated with their Amish community. So a 250 pound whoopie pie was made in Pennsylvania which gave them the record for the largest one. Now Maine has snatched that title with a 1,067 pound whoopie pie. They sure made a lot of whoopie in Maine! 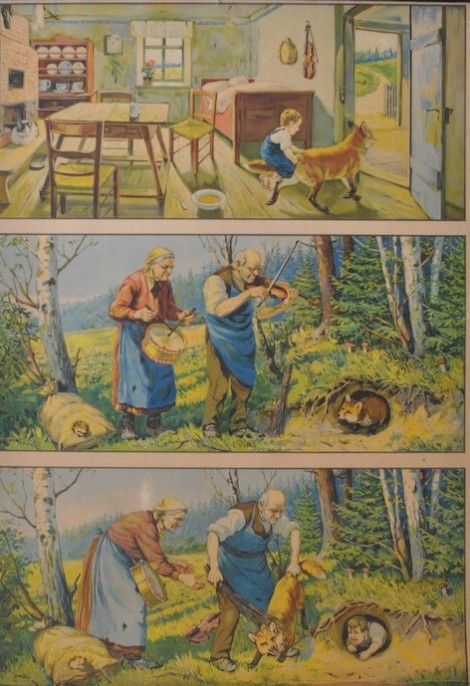 This is a poster currently on sale at Etsy, under the title of "The Fox Catcher," discovered by reader Deborah Newton. Does anyone recognize the fable that it illustrates? The essential events are truly weird.

1) A fox comes to a house and steals away a child.

2) The parents track down the fox to his lair and lure him out with drum and violin music.

3) The fox is beaten and/or killed, and the tearful child is saved.

I thought I knew a lot of fairytales, but this one escapes me!