Mom Of The Year

Michael Kelly got a hysterical phone call from his mother saying that his 9 year old son was missing. As one might imagine, Michael panicked. He then made some bad choices on his way to mom's house. Driving at speeds up to 120 mph, running a red light, and refusing to stop for police he finally arrived at his mother's place. He was then arrested on several charges. But what about his son? The boy is fine, Michael's mom says it was just an April Fools joke.
Good one mom! Can't wait to see what she comes up with next year.
http://www.charlotteobserver.com/2010/04/07/1362343/april-fools-day-joke-lands-man.html?commentSort=TimeStampAscending&pageNum=4&&&mi_pluck_action=page_nav#Comments_Container

These Things Don’t Only Happen in Florida Some people have a dog, or a cat. Others have more exotic pets. But you don't often come across anyone that keeps chickens (unless they plan to eat the suckers at some point). Lauren Steltzer, of Lower Merion, Pennsylvania, not only keeps chickens as pets, but when two of the chickens went missing recently, she put up posters around the neighborhood and updated her Facebook page. Unfortunately, the police in Lower Merion didn't get the message and when a police officer responded to a call for a chicken at large, he did what anyone else would do when confronted with such a ferocious beast... he got a friend to shoot it (with a bow and arrow!). At least the police department admits that they could have shown better judgement. Read the original article here.

Don't you hate it when you are just walking along, and a perfectly good cartoon house turns out to be an illusion?

"House 1" is the title of the piece, from the National Gallery Sculpture Garden in Washington DC. It was created by U.S. artist Roy Lichtenstein.

I'm not certain that the ability to understand the language here would improve this weird ad.

Wow.
Worst. Timing. Ever.
Release a friendly documentary about Japanese kids in the same year as Pearl Harbor.
Wow.

Everything you ever wanted to know about the massive, but largely unknown freighters of the Great Lakes, is on Boatnerd

Have you ever seen a picture that simply makes no sense?

Is a Nebraska Admiral better than a Kentucky Colonel?

A Question, Asked by Baroness Finlay of Llandaff, in the Palace of Westminster, the Chambers of the House of Lords, this 3rd of March, 2010, at 3:07 pm

At long, long last, after much diligent searching throughout the length and breadth (and depths, don't forget the depths) of the InterWebs, finally, something even weirder than "Roy Orbison in Clingfilm"; Fellow Weerdoes, I modestly present: The Christian Furry Haven 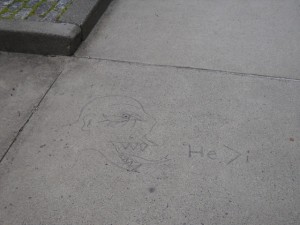 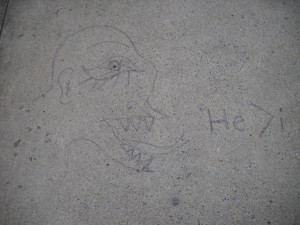 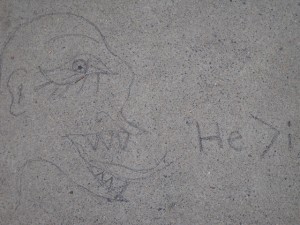 Perhaps longtime WU readers will recall this weird Providence poster that I featured some time ago.

Well, now we get some matching sidewalk graffiti. "He is greater than I?" Scary!

The Art of Teenage Shopping, Plus Hecklers' Rights, Mortuary Golf, and Low-Payout Crimes

Haul Queens
In the spirit of basketball's Final Four, Blair Fowler, 16, is at the top of her game, too, taking it to the next level, giving 110% . . at shopping! "Haul queens" like Blair hit the malls and then display their purchases via YouTube (100,000 videos so far)–but without "bragging," which is regarded as tacky. One sociologist called it "the perfect marriage of two of Generation Y's favorite things, technology and shopping. [V]iewers don't have to spend the money, and you still get the thrill. It's a bit like pornography." (Blair's from Tennessee but attracted the attention of The Times of London's Los Angeles stringer, who noted Blair's "ability to deliver a high-pitched, 10-minute lecture on the merits of skinny versus lowriding jeans." The Times

Tina's Vote in November Counts Just as Much as Yours
Tina Mae Stone, married to the main man of the Hutaree Christian militia arrested weekend before last in Michigan, reportedly explained on her Facebook page part of why she's so damned mad at the U.S. government: "I'm peeved . . . our government passes a bill to spend more than 20 billion dollars to bring Hamas [jihadists] here and supplies them with food and homes that [sic] just wrong." "I'm so stressed I could KILL someone!!!!!!!" (Source of Tina's knowledge of the issue: an e-mail, in which the writer noted, conveniently, that the bill ["H.R. 1388"] was passed "behind our backs. . . . It wasn't mentioned on the news." [ed.: There's a reason it wasn't, Tina.] Detroit Free Press // Detroit Free Press (the Hutaree 9)

Canada's Kinda-Free Speech
Veteran comedian Guy Earle has a court date with the Human Rights Tribunal in Vancouver because he "discriminated" against two rude, obnoxious hecklers–but hecklers who are members of what is called in Canada a legally "protected class." Like any surviving nightclub comic, Earle has a repertoire of heckler-squelchers and fights nastiness with nastiness. And he had the audacity to refer, snidely, to the fact that males were not represented in that particular loving heckler couple. (Also in oh-so-delicate Canada last week, the student government of Queen's University in Ontario blasted the insensitivity of the school's hosting a fundraiser featuring guys doing pratfalls in inflatable sumo wrestler suits, which the students said was shameful, in that the incident disrespected Japanese culture.) Canadian Press /// National Post

American Much-Freer Speech
Insulting a "protected class" in the U.S. is not without its consequences, but at least it doesn't come with stand-alone punishment by government. Thus, Rev. Fred Phelps and the lesser Phelpses of the Westboro Baptist Church won't ever do time just for insulting a dead Marine by picketing his funeral with "God Hates Fags" signs (even though the late Marine was in all likelihood straight). Westboro might get sued, though, for inflicting emotional distress on the family. One judge ruled for the Marine father, but an appeals court (holding its nose) reversed, declaring that the Phelpses were just free-speeching. (But then, the Phelpses, as "winners" of the lawsuit, asked the court for reimbursement of its costs from the "losers," meaning the Marine dad, and the court ordered dad to pay $16,000.) (Update: Fox News's Bill O'Reilly said he'd take care of the tab.) Baltimore Sun

First Things First at a Bulgarian City Council Meeting
Dimitar Kerin was voted off of a key committee as punishment for playing the online game FarmVille during a Council meeting (after warnings–in that several members had been playing). FarmVille, though, requires quick, real-time decisions, since (wrote AOL News) "crops are going to mature and even die whether or not players are logged on. If they want to maximize their yield, they better be [continuously logged on and] ready to bring in their crops the second they're ready to harvest," even if that's in the middle of a city council meeting. Novinte (Sofia, Bulgaria) via AOL News

Check out this grade school production of Scarface. The language has been adjusted in deference to the age of the junior thespians, popcorn replaces cocaine and the weapons fire Nerf darts but the kids do pretty well with it. There is a video at the link.