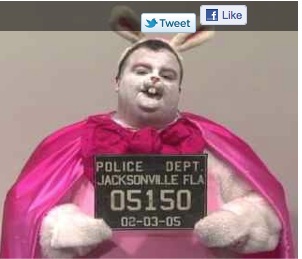 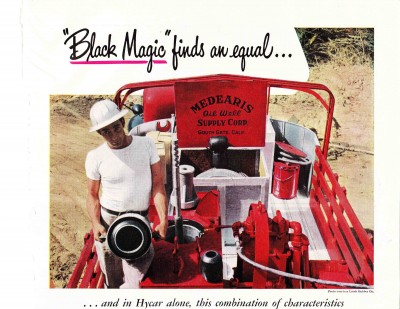 [From Fortune magazine for September 1948.]

Is that a hydraulic slurry mining hose in your pants, or do you just work here? 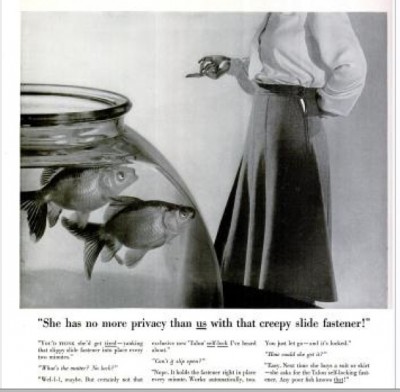 Did you ever realize that goldfish were such astute fashion consultants, able to comment knowingly on zipper failure?

Read the text at the original site.

If Barbie was 6 feet tall her measurements would be 39-18-33. Galia Slayen decided to build one to illistrate the dolls unrealistic proportions. But then Barbie has no nipples, her toes are fused together, her mouth doesn't open, she doesn't even HAVE any other openings, she's got plastic skin, not to mention she hasn't aged a day in over 50 years. In short IT is a toy. Little girls see women of all shapes and sizes all around them every day. While, yes, her proportions are ridiculous blaming that for eating disorders in women seems unrealistic. If only we could find one root cause for any, all social woes then we could fix every one of them. Admitting it is a combination of factors makes it too difficult to even contemplate repair. After all alarmingly large numbers of the male population aren't working out to the point of injury and exhaustion to look like G.I. Joe. Any guesses on HIS comparative proportions?

Next Up, the Crucial Question of 'How Long Since They Had 'em Some?': Researchers from Columbia University and Israel's Ben Gurion University examined trial judges' calendars over a 50-day period and found a remarkably proportional diminishing of criminals' chances for parole as the morning or afternoon wore on. That is, the researchers hypothesized, the louder that judges' stomachs growled, the lower the perp's chances for freedom. ABC News

Westboro Baptist Updates: The good news for the Phelpses is that there is now evidence that someone, anyone whose name is not "Phelps" actually appears to agree with them--specifically, Ms. Zoe Bethel, who is a high school student in Middletown, Ohio, and who was given a hard time by administrators for wearing a T-shirt bearing Westboro's signature slogan. The bad news for Westboro, though, came at one of their soldier-funeral protests, at Fort Meade, Md., in a deliciously ironic reaction by Margie Phelps-Roper (Pastor Fred's point person, daughter, and lawyer). As the Westboro message was quickly being drowned out by a large, wild "flash mob" of performance artists and rational Christians (and a revving-up biker gang), Margie just muttered, "What the heck's wrong with these people?" Dayton Daily News /// The Capital (Annapolis)

The Death Penalty Deters: Yr Editor knows that's impossible (P.C.-wise), but listen to jilted lover Dmitry Smirnov, who admitted tracking Ms. Jitka Vesel from British Columbia to Oak Brook, Ill., and then, he told police, killing her. According to the prosecutor, Smirnov had researched Illinois's death penalty (abolished by statute on March 9th, following numerous embarrassing misconvictions) and proceeded only when certain he would not have to walk the last mile for his crime. Chicago Sun-Times

No Cure For Cancer . . Well, Except for Cigarette Smoke: Indonesia is Big Tobacco's Promised Land. U.S. firms have subsidiaries there; most people smoke; and the 400,000 deaths a year from it are quickly attributed to other things. Enter Dr. Gretha Zahar, a healer who touts cures for autism and various cancers, and emphysema, with a therapy in which she actually blows cigarette smoke into the patient's lungs through a tube. (But they're "divine cigarettes," infused with "nanotechnology" that removes cancer-causing "free radicals" by manipulating mercury levels.) Big Tobacco having been very, very good to Indonesia over the years, Dr. Zahar's clinic is in good standing. Agence France-Presse via Yahoo News

Bellybutton bacteria, ick! Makes me glad I no longer have one.