The first clip shows Robert Downey Jr's first role in the year 1970, in a film by his father, Robert Downey Sr. As an example of late-60's weirdness-- Well, let's hear from Leanne Benson at IMDB:

I saw this film last night at the Barbican in London, apparently it hadn't been shown for thirty years, longer than I've been alive! We were warned at the beginning that it wasn't the easiest film to watch and with that in mind, I actually found it not too difficult to watch. All the characters were very different and I really like the idea of having people play the animals. It was pretty sad but also heartwarming in a way. I loved Robert Downey jr as the puppy, so cute!!!

I would say that the film was pretty bizarre and I'm not sure if I could watch it again for a while but for someone like me who is interested in they ways of past decades, I think it was a brilliant peek into the late sixties. There was one particular character, the old lady who played the dog with the mange problem who I thought was brilliant, amazing styling and directing. A film that should be available to be shown.

The Ostrich Dance of Renita Kramer 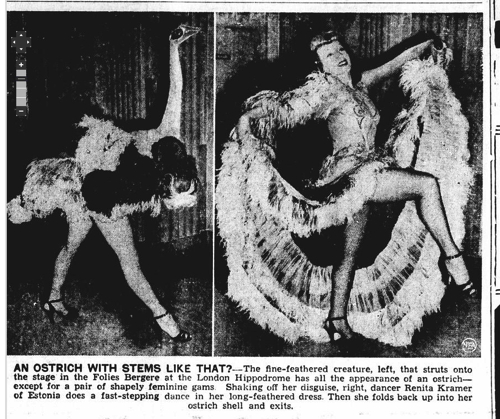 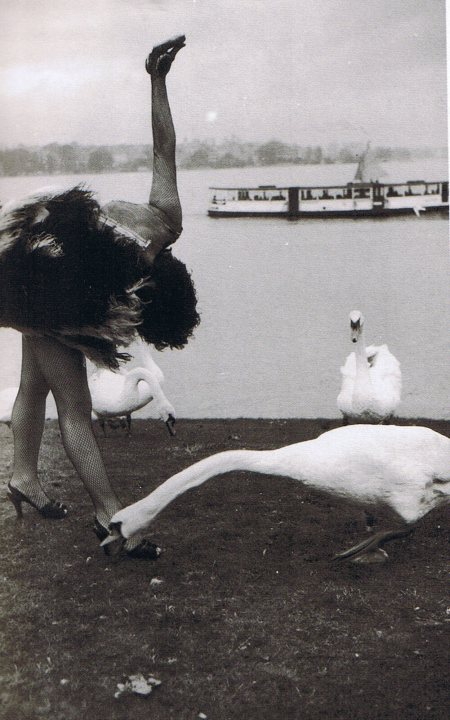 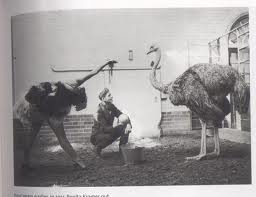 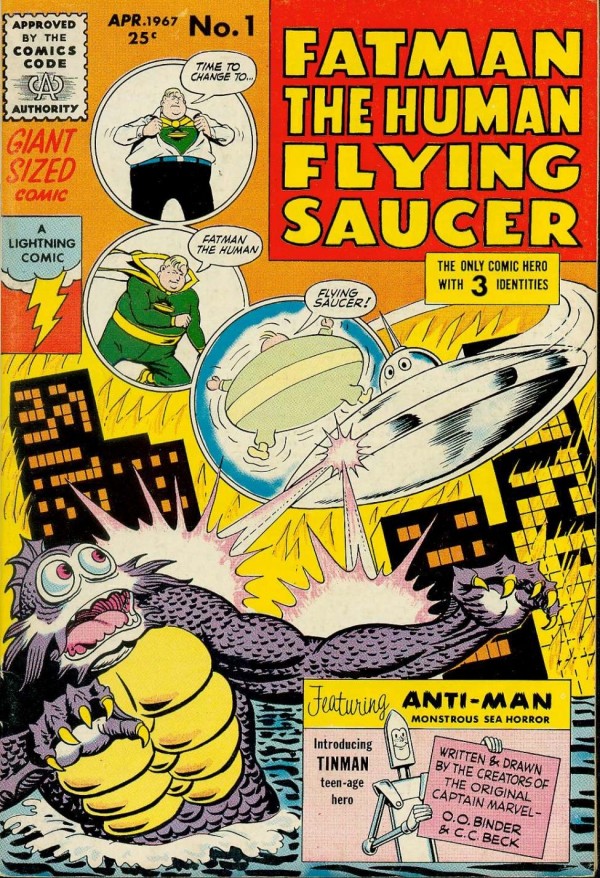 Read the totality of this title's three issues here.

Want to communicate with your computer, but are too lazy to use a mouse? Stick this on your forehead, and your thoughts run your computer. 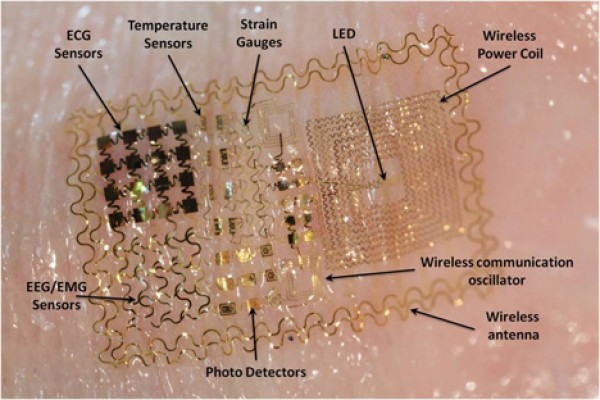 Here's the link, where you can see the processor stuck on a baby.

Ready for your thoughts to show up on your screen? 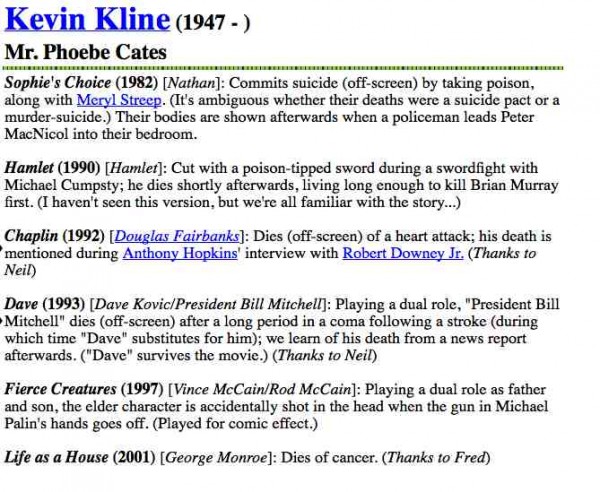 Surely you often ask yourself, "How many gruesome screen deaths has my favorite actor or actress died, and in what films?"

No? Not a common question of yours?

Maybe WU-vies will share their favorite cinematic death scenes with others. The weirder, the better, of course.

Invented in 1965 by William Wilson of Wyandotte, Michigan who claimed that his mirrors filtered out "sunburn radiation" leaving only "tanning radiation" and therefore gave a "blisterless, heatless, burnless, lotionless suntan." He's keeping a close eye here on the subject of one of his tanning experiments. 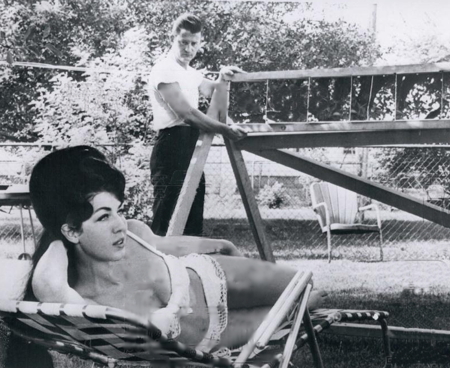 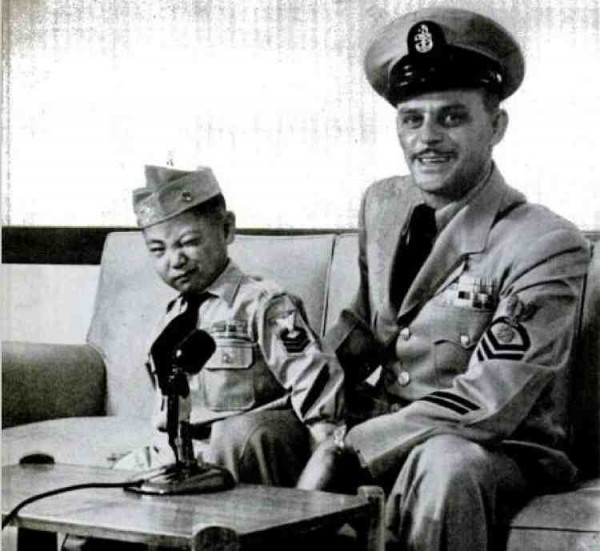 NOTE: News of the Weird 2.0 will not be published next week. Yr Editor will have been busy getting totally messed up at his 50th high school reunion all weekend.

Khalid Sheikh Mohammed (reputed 9-11 mastermind), who was waterboarded 183x, was by 2009 permitted to design his own household vacuum cleaner while at a CIA black site (according to a former senior CIA official). (Non-Weird Backstory: After wringing all the intel out of detainees, the CIA then has to keep them sane--in case they need to prosecute them at some point--and thus it’s all about giving even the waterboardees hobbies, etc. KSM is an aggie from North Carolina A&T.) (In fact, of all that school’s alums, KSM probably has more Google hits than anybody except Jesse Jackson.) Associated Press

The weirdest person Yr Editor learned of last week is Amy Webb, who proudly and in great detail wrote of creating (and, especially, dutifully filling in, for months and months now) spreadsheets measuring every little categorical cohort she can think of (quality of poops included) having to do with her new baby’s welfare. Her pediatrician says to give it a rest, but she’s defiant. Slate.com

Updates on News Yr Editor Tipped You To: (1) It’s not quite Tahrir Square yet, but the City of San Francisco’s closing of Bacon Bacon (because of complaints about the smell of bacon) is still on hold as demonstrators have been gathering. “Fight the Power!” (Bonus T-shirt: “Bacon Bacon (You Had Me at ‘Bacon’).” Another hearing this week. (2) When writing about the helium reserve,, Yr Editor didn’t even consider that there is also a National Raisin Reserve. It’s only 64 yrs old. California farmer Marvin Horne, 68, is ready to go down with the ship challenging it in court. Wall Street Journal /// Washington Post

Thomson Reuters decided to suspend selling an extra-advance peek at an influential University of Michigan twice-monthly economic survey. Thomson Reuters already charges its clients for a 2-minute head start on public release of the “consumer confidence survey,” giving those clients 120 seconds to buy-buy-buy or sell-sell-sell before y’all know about it. What they’re suspending is the additional 2-second head start they give about a dozen clients who pay them “more than $6,000 a month” for that 2 seconds. With today’s high-frequency trading, they can push millions of shares through in that 2 seconds, and even though the evidence is that they only make about 1/20th of a cent per share, that’s still a good chunk. Now, that’s how that part of the world lives, so back to our own jobs. Y’all want fries with that? New York Times /// Bloomberg Business Week

Robin Hood as Pothole Fixer: Long-suffering citizen Ron Chane, fed up with infrastructure neglect in Jackson, Miss., lifted asphalt from the city and filled 100 road holes, himself, and the mayor is pondering whether to file charges. (Buried Lede: The mayor of Jackson, Miss., is a man by the name of Chokwe Lumumba.) ABC News via Yahoo News

Criminals Not Ready for Prime Time: (1) Wanda Podgurski, 60, fleeing to Mexico after her conviction of a massive insurance fraud in San Diego, tweeted at the prosecutor, “Catch me if you can. (June 6th).” They did (July 4th). (2) A 28-yr-old man was arrested in Mason, Mich., when, coming to the police station for court-ordered fingerprints, he upped the stakes by paying the $16 fingerprint fee using a stolen credit card. Los Angeles Times /// MLive.com

[Now that the jury system has worked, in Sanford, Fla., as it was designed to--though not as what many people think they want it to do, such as to punish jerkishness or soothe grief--we can return to the conscience-free exercise of common sense and decide the fates of a few more suspects now awaiting trial.]

The mature Edward Gill, 59, Clovis, Calif., has to convince people he’s not the kind of person who would start aiming at random cars with marbles in slingshots . . just because they were keeping him awake . . in his roadside trailer. Fresno Bee

The angelic Francis Campbell, 41, allegedly went on a vicious golfclub-swinging rampage against his mom and stepdad, including putting his fingers in her nostrils and trying to rip her nose off. WCCO-TV (Minneapolis) [LINK CORRECTED]