Any WU readers confused about "going steady" will certainly benefit from watching this video.

The tribe that measures stature by how distended your lips are
Here's a disturbing photo essay from Ethiopia, in the current Rolling Stone, where people, starting young, walk around with painted, oversized discs in their mouths, presumably to garner respect and attract mates. Warning: Not Safe For Work™, in that they also don't wear much in the way of clothes. Rolling Stone
Comments 'ethiopian_tribe'

Laughing is good, even if it's faked
"Laughter yoga" started in India, where you stand around in a circle and go "Ho ho ho ha ha ha" until your body mimics all the stress-reduction benefits that giggling brings. [Ed.: cf. Beaver: "Wally, why do grown-ups drink?" Wally: "I think because it's harder for grown-ups to have fun than it is for kids."] Billings Gazette
Comments 'laughter_yoga'

Your Daily Loser
Fugitive Paul Sans, 26, had a handy alias ("Jonathan Brackett"), only it's useless if you can't demonstrate to the cop that you know how to spell it. (Bonus: His passenger must've had a premonition Sans wasn't up to the job because she had just bought $100 worth of cocaine and thought she better hide it in her hoo-hah for when the cops inevitably pulled Sans over.) Portsmouth Herald
Comments 'paul_sans'

Your Daily Jury Duty
[no fair examining the evidence; verdict must be based on mugshot only]
Jack Blurton might have been illegally carrying a knife and a grenade at Groggy's Bar in Mesa, Ariz. (but, y'know, maybe he was framed). KTAR Radio (Phoenix)
Comments 'jack_blurton'

Funeral, church service, body-viewing, 250 grieving guests, solemn automobile procession to the cemetery for the burial. All dignified-like. But someone should have double-checked ahead of time to make sure they had dug a hole. Palm Beach Post

Either terrible reporting by Reuters or a golf shot so bad even the Three Stooges couldn't pull it off. Reuters

Awesome inventive ingenuity on a Canadian Indian reservation: a "superjuice" much more powerful than booze (in fact, so powerful it continues to ferment in your stomach, keeping you drunk for days). Winnipeg Sun

The latest from the crack ABC News medical reporters on some condition that you've got to be the unluckiest person in the entire world if you come down with it (this time: spontaneous bleeding through the pores). ABC News

Comments on More Things to Worry About on Wednesday?
Comments 'worry_081029' 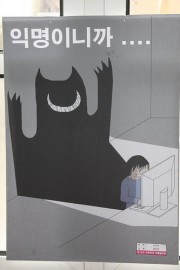 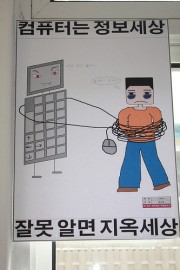 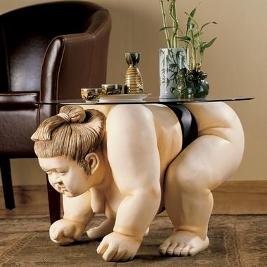 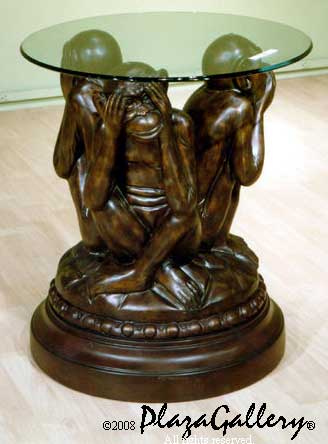 I want a unique Xmas gift for all my friends. But I'm absolutely torn between the Sumo Table and the Monkey Table.

Which would you choose? 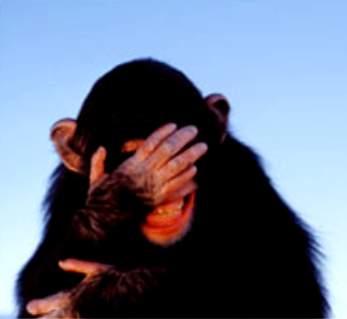 "Pussy-Whipped"
was the New York Post hed on its profile of "Goddess Haley," 28, married, and a full-time dominatrix in a Manhattan S&M parlor, with clients paying up to $180/hour. The "pussy" part refers to the cat shelter she runs out of her two-bedroom apartment (30 kitties at a time), all endorsed by the animal health people. "Being a dom is hard work. I've pulled muscles whipping slaves. . . . Once, I was even flogging a slave and realized it was feeding time [for a cat I had brought to work] and had to excuse myself for a few minutes. But [the client] probably liked the neglect." New York Post
Comments 'pussy_whipped'

Worst-case scenario for dropping your cell phone
On a train in France, drop it in the toilet (those super-suction jobs they have on trains), reach in, get hand stuck, nobody can help, have to stop the train for 2 hours, cut away the toilet, carry you off the train on a stretcher with the toilet still attached. BBC News
Comments 'cellphone_toilet'

Your Daily Loser
In the rural Florida panhandle, Mr. Land Ford Jones was charged with domestic assault, and the best defense he could think of for her cuts and bruises was that, hey, she rammed her head into the refrigerator over and over, and what's a poor guy supposed to do? Northwest Florida Daily News
Comments 'landford_jones'

Your Daily Jury Duty
[no fair examining the evidence; verdict must be based on mugshot only]
A choice one from last week's The Smoking Gun collection, with the downside being that TSG never tells what they're charged with (which is perfect for us, because we don't need to know). TheSmokingGun.com
Comments 'jury_081028'

Eyewitness News
[news videos goin' around]
Manuel Uribe, formerly the world's heaviest man at over 1,200 lbs, who has since slimmed down to the upper-600's, got married, and here are the lovely photos and video, like of him heading off to the church wrapped in sheets on a flatbed truck. ABC News /// BBC News (video)
Comments 'video_uribe'

Recurring Theme: It's inevitable, apparently, that the first thing that occurs to anyone who steals a cell phone is to take a picture of himself. Cincinnati Enquirer

Early leader in the running for next year's Nobel in science: brewing beer with a dash of morphine. Associated Press via San Francisco Chronicle

A UK entertainer who says he's been successful soothing tensions in the Palestinian territories said he'll now try with gangs in Glasgow, with his classes in yoga. (Negative bonus: He says it also worked with Amy Winehouse.) Daily Express (London)

A British county police force, which had recently cut back law-enforcement because of a dwindling budget, announced it would fight crime by spending the equivalent of about $55k to alter its logo slightly. Daily Mail

Comments on More Things to Worry About on Tuesday?
Comments 'worry_081028'

Editor's Note
Since Monday is the slowest weekday in news-news, it's also the slowest in weird news. So, once again, I don't have enough stuff I'm thrilled with to post an afternoon set today. See you tomorrow morning.
Today's Newsrangers: Steve Miller, Sandy Pearlman, Kurt Knochel, Jim Pross, Candy Clouston, and many who spotted the hand-toilet story.

Wow! You guys are good! Or that contest was way too easy!

So, Messr. Maxx gets the prize. He should send me his snailmail details through the contact link on the site.

We'll have to consider this brief event a trial run for future contests--made much harder, to challenge the brilliant WU audience. 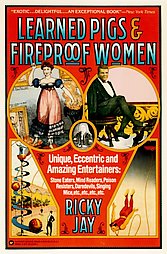 Welcome to the very first contest sponsored by your pals here at WEIRD UNIVERSE.

The single prize is a used but in-good-shape trade paperback copy of Ricky Jay's Learned Pigs and Fireproof Women, an essential handbook for any true lover of the weird.

The challenge: to win the book, you must identify the painting and artist behind this little visual snippet to the right. The painter is one of the more famous outsider artists of the past 200 years. With luck, this challenge will be neither too easy nor too hard. If the contest goes on for any length of time without a winner, I'll post more snippets of the canvas, and other clues.

Please make your guess in the COMMENTS section of this post, not through email. Priority of the response, in the case of multiple correct guesses, determines the winner.

When we have a winner, I'll get their snailmail and post the book with some of my mailart on the envelope.