Yes, I know, making fun of Goths--especially Swedish ones--is like shooting fish in a barrel. But who can resist?

Learn all about the band here.

Don't you think that drummer should dust his kit before he uses it?

Before you put on a mask and try to rob a jewelry store, make sure this kid isn't standing close by.

Hope he got a reward!!

Why America Needs to Give South Korea a Wedgie, plus More Things to Worry About

South Koreans always stomp American kids in reading and math. In Seoul, they actually had to put a 10 p.m. curfew on coaching-school sessions, lest schoolkids study all night long, too. It's "the country's culture of educational masochism," writes Time. In fact, the government actually had to raid all-night study classes that cover their windows after 10. (Bonus: Even the coaching schools are selective, basing acceptance of students on test scores.) (Double Bonus: American reformers say U.S. schools ought to get tougher, like Asian schools, but Asian reformers say their schools ought to relax more, like American schools!) Time

For fashion week in London, Rachel Freire herewith presents her dress made with, um, 3,000, um, cow nipples. To resounding denunciation by animal-rights protesters, Freire asserts that she's just using "scrap[s]" that would be tossed out anyway, that she got from a tannery, that she's "recycling." "The people criticizing are clearly clueless about the amount of leather wasted on a daily basis." (Ignored in all the brouhaha: Why would someone make a dress out of nipples, anyway?) Treehugger.com

One Russian lunatic in no danger of being put away by the government: Mother Fotina, 62, who believes she is Joan of Arc reincarnated and that Vladimir Putin is St. Paul, and she has quite a following. (Spiegel Online: "Polls show 57 percent of Russians notice 'signs of a Putin cult' in the country.") Says Mother, "God has appointed Putin to Russia to prepare for the coming of Jesus Christ." Spiegel Online

The annual Ig Nobel prizes were announced in Cambridge, Mass., and we learned from research that people make either better--or worse (it depends)--decisions when they have to pee; that high achievers procrastinate like everyone else except that their distractions need to be more important than those of low achievers; and that certain kinds of beetles will mistakenly try to mate with a certain kind of Australian beer bottle. Pastor Harold Camping and five other sages shared the Mathematics prize for their complex historical calculations (mostly Biblical) assuring us that we shouldn't be here today. Huffington Post

As America's Apple is to consumer electronics, Japan's Toto is to crappers. Herewith is Toto's latest: a motorcycle that runs on the rider's doodoo. (It's a demo to show the stretch of sustainable, CO2-reducing technology.) Tokyomango blog [link from BoingBoing]

Broadway Bound is the name given to a brave, or perhaps just very lucky, sea lion by staff at the Sausalito Veterinary Clinic in San Fransisco. Local police received a number of calls from motorists early Saturday morning reporting a sea lion crossing the 8 lane highway 101. Police and animal control arrived and stopped traffic to pick up the injured sea lion and take it for treatment and eventual release in a slightly safer place. It should be noted that Broadway Bound successfully crossed all 8 lanes and was sitting on a stump next to the Broadway off ramp, thus the name.

Dog Has Monkey On Its Back 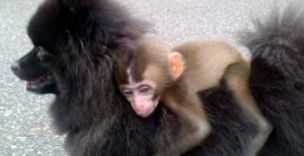 Any port in a storm seems to apply to these fast friends. 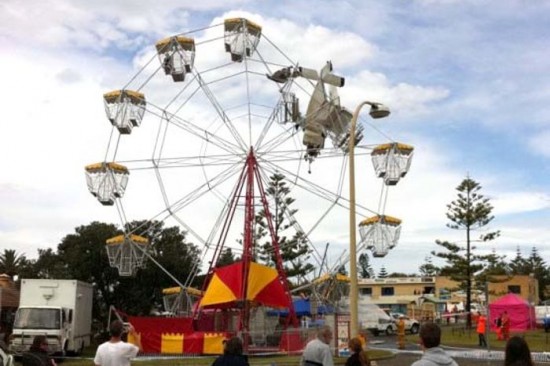 A pilot attempting to land at an airstrip close to a festival where a Ferris wheel stood claimed he did not see it. After the collision two kids were trapped in a gondola and the pilot and his passenger were trapped in the mangled plane till rescuers could extricate them. Didn't see it...really dude?