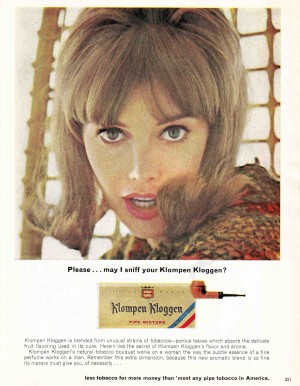 [From Playboy magazine for December 1965.]

Okay, we get it. Your product has an odd name that might lend itself to a double entendre. Such a campaign worked for Smucker's Jelly & Jams, of course. But the problem lies with the verb "sniff." If the ad had read "May I hold your Klompen Kloggen," all would have been good smutty fun. But although you can indeed hold the unlit tobacco, you can't "hold" the delightfully aromatic pipe smoke (the selling point). So the copywriter is forced to use "sniff."

But sniffing some private portion of another individual (the inescapable connotations of "May I sniff your BLANK...) conjures up all sorts of canine or rutting behavior, not sexy but animalistic. One pictures this pretty woman burying her nose in some guy's armpit--or elsewhere.

I posted last week about how Aokigahara Forest in Japan was a popular destination for those wishing to commit suicide. Another suicide fad in Japan is "Detergent Suicide," which involves gassing yourself by mixing common household chemicals:


At least 500 Japanese men, women and children took their lives in the first half of 2008 by following instructions posted on Japanese websites, which describe how to mix bath sulfur with toilet bowl cleaner to create a poisonous gas. One site includes an application to calculate the correct portions of each ingredient based on room volume, along with a PDF download of a ready-made warning sign to alert neighbors and emergency workers to the deadly hazard.
A few cases of Detergent Suicide in the US have experts concerned that the fad may be catching on over here.

An interesting article by sociologist Kayoko Ueno argues that suicide is actually one of the defining features of Japanese society (think of hara-kiri and kamikaze) and one of its major cultural exports:


We, Japanese, are living in an affluent society geographically far away from the Middle East and Russian turmoil, and many of us view the suicide bombing news as an alien event, or something out of a computer game VR (virtual reality). On the other hand, there are some Japanese, especially from the wartime generation, who see the news differently, tracing the suicide bombers’ prototype to Japan’s “Kamikaze”, the suicide air attack squad at the end of World War II. In fact, one of my senior colleagues the other day came to me, pointed at one more such item in the news, and whispered melancholically, “that’s Japan’s invention.”

In storage at just one of Arizona's three Customs and Border Protection warehouses for seized contraband: 13 tons of marijuana, 1,150 vehicles, and $500k in cash. Arizona Republic

Peter Enmon, 44, was arrested in Anchorage after driving into a cement pole while being chased by police for stealing computers from a shop. (Bonus: It was a repair shop; he had busted machines.) Anchorage Daily News [UPDATE: Link fixed]

At a Texas legislative hearing on Medicaid and the Children's Health Insurance Program Thursday, Rep. Gary Elkins (a House member since 1995), sought clarity: "What's Medicaid? I know I hear it. . . . I really don't know what it is." (Bonus: Gary, it accounts for about one-fourth of Texas's budget, and at least close to that for every other state.) Austin America-Statesman

Your Daily Jury Duty
["In America, a person is presumed innocent until the mug shot is released"]
Well, this'll certainly challenge you: Ya think Robert Caldwell, 62, Kennesaw, Ga., shot his wife? WSB-TV (Atlanta)

Presumably, the Vatican will be pleased because the Barcelona couple plan to get married before their baby arrives, but on the other hand, the lead mommy is in the middle of gender-reassignment (to become "Ruben") and has one-upped American Thomas Beattie by expecting twins. Daily Telegraph

The Nuclear Family's Not What It Used to Be: A Kansas City, Mo., man shot his adult daughter in the ass because she had poured out perfectly good gin. And a 15-yr-old F State boy choked and beat the snot out of his father, twice, threatening to kill him and bury him in the yard, for selling the favorite truck that the kid had been driving around. KCTV (Kansas City) /// Star-Banner (Ocala)

Only in California: Lipstick Bail Bonds, where two ex-LAPD women and their band of hoochies use feminine distractions to do what Dog Chapman accomplishes by force. Orange County Register

Your Daily Jury Duty
["In America, a person is presumed innocent until the mug shot is released"]
Cory Dodson, 25, Hamlin, N.Y., charged with aggravated telephone harassment (and try not to hold it against him that the harassees were cops who [CORRECTION: whom] Cory allegedly told weren't smart enough to trace his calls). Democrat and Chronicle (Rochester)

Aussie Malcolm Biggs said he was a big fan of Steve Irwin's and that that gave him an over-inflated sense of confidence to try to rescue the wounded red-bellied black snake (which is venomous, and btw, snakes do not co-operate with "rescues"). [Ed.: About emulating Steve Irwin . . .] Courier Mail (Brisbane)

A Florida state senator with a fabulous first name, Larcenia Bullard of Miami, in a debate on the proposed legislation to make bestiality a crime but carving out an exception for legitimate "animal husbandry" work: "People are taking these animals as their husbands? . . . So that maybe was the reason the lady was so upset about the monkey (referring probably to the recent incident in Connecticut in which the chimp went crazy)?" Orlando Sentinel [scroll down]

Hundreds of independent gas station owners in New England who followed oil-disposal laws to the letter, dumping their used oil at a legal site in New Hampshire, are starting to be billed amounts into five figures to clean up the site, which is now a Superfund hell-pit, because the site's owner is broke. (Bonus: The independents who dumped their oil illegally are home-free.) Boston Globe

A House subcommittee found that, in a sampling, 56% of TARP bailout recipients last year owed back federal taxes at the time, yet the CEOs had sworn in writing that they didn't (and IRS is said to be "investigating"). Washington Post

Veteran prolific, old-school Tennessee moonshiner "Popcorn" Sutton, 61, was found dead, probably by suicide because he was scheduled to do a stretch in prison, since revenooers had raided his humongous stills (and also found a gun). Wall Street Journal /// Knoxville News-Sentinel [another classic photo] 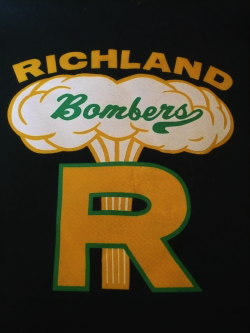 Continuing the theme of strange insignias begun with that of the village of Whitesboro, Irene submitted the logo of Richland (Washington) High School. Richland bordered on the Hanford nuclear weapons facility, where the Fat Man bomb was manufactured that was detonated over Nagasaki. So naturally the school called its team the Richland Bombers. Nothing like having your mascot be a symbol of nuclear annihilation. 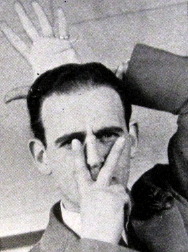 "Handies" was one of those bizarre fads that periodically sweep the country. It reached the high point of its popularity in the summer of 1936. After that, its descent was steep and fast. No one could figure out where the fad came from. From Time magazine:


To play "Handies" a person attempts by manual manipulation to portray a familiar phrase, title, personage or situation. The more extravagantly far-fetched the conception, the better the "Handy." Observers are not expected to be able to identify the improvisation but to be ready to return an even more fantastic one.
So it was like a static version of charades. The image shows the Handy for "Indian riding in a V8." It's the only image of a Handy I could find. Not hard to see why the fad died out.