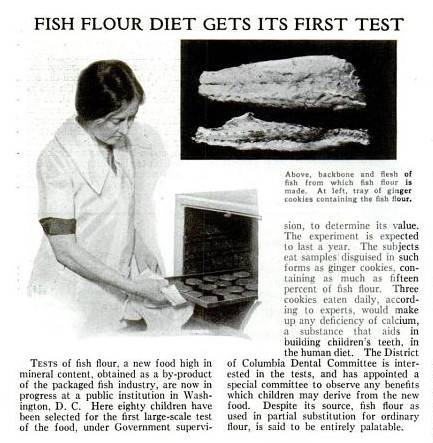 
Tests of fish flour, a new food high in mineral content, obtained as a by-product of the packaged fish industry, are now in progress at a public institution in Washington, D.C. Here eighty children have been selected for the first large-scale test of the food, under Government supervision, to determine its value. The experiment is expected to last a year. The subjects eat samples disguised as ginger cookies, containing as much as fifteen perfect of fish flour.
Fish Flour is basically a powder made from ground-up fish. From the 1930s to the 1960s the fish industry pushed hard to convince people that fish flour was a) palatable, and b) a possible solution to world hunger (because of its high protein content). But I guess it never caught on. There was a last high-visibility pr effort in 1968, when U.N. officials were given fish-flour cookies as a snack, but after that fish flour fell off the map.

It's the New Year. Time to get a new calendar. But John Walkenbach has a good idea. Don't buy a new one. Recycle an old one: