Steve Brill, the "Wildman" of Central Park, aka "The Man Who Ate Manhattan," is an expert on edible wild plants. He began leading foraging tours of Central Park in the early 1980s, teaching people what plants growing wild in the park they could and couldn't eat. 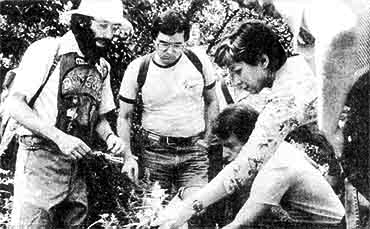 Of course, the park police weren't going to stand for this. In 1986, two undercover rangers tagged along on his tour and arrested him at the end of it. The official charge was misdemeanor criminal mischief. He became famous as the only person ever arrested for eating a dandelion.

The charges were soon dropped, and the park then hired him to lead the same tour.

Steve is still going strong. He's got a website, an app, and he's still conducting his tour. It gets 5 stars on yelp.