The title says it all. Check out pictures of the rest of the signs in the series. Someone is an artist in both cartooning and expressing a point in a way that will be remembered.

Ornithopter, the name Todd Reichert gave to his invention, a flying machine in which the wings flap as the rider pedals, powering flight. The successful first flight, by Todd, is shown in a clip at the link. On a bike, if you get tired and stop pedaling, you just come to a stop. I dare say with this you wouldn't want to just stop pedaling though.

Matthew Mazzotta's project, Park Spark is quite ingenious. At a Cambridge Mass. dog park the dog owners, when picking up their doggies' poo, are asked to deposit the um..deposit in a yellow tank on site. Methane gas extracted from the animal droppings by the two tank set up is then used to fuel a gas street lamp in the park. Pretty nifty, talk about making a silk purse out of a sows ear.

Note From Chuck About Email

Hey, its supposed to turn back into a pumpkin at midnight not NOON!!! Cool race.

Careful What You Wish For: In a tender, moving story, a sensitive adopted son, 33, finally tracked down his biological mom, aiming for a tearful reunion . . only to discover that she's a retired circus "bearded lady" (keeping herself trimmed these days to 11 inches). Still, blood is thicker than facial hair. (Note to Maury Povich: Please return their phone call; they need someone to pay for the confirming DNA test.) AOL News

(Recurring Theme) Surgeons Just Wanna Have Fun! When Dr. Red Alinsod did the hysterectomy last year on Ingrid Paulicivic, 47, he electrocauterized a 1-inch-by-5-inch "INGRID" on the old part (after he took it out, he said, which he maybe did because women have been known to actually ask for their uterii, as, y'know, souvenirs). She's suing because she can't help but think he must've done something bad to her before he removed it because she's still in pain. (In 2003, hotshot surgeon James Guiler was sued for branding initials into a patient's uterus--during the surgery. Even worse, it appeared that the initials, UK, were merely a tribute to the Lexington, Ky., doctor's alma mater.) The Smoking Gun /// Associated Press via Kentucky Enquirer

Civilization in Decline (continued): Jennifer Tesch's daughter got kicked off her cheerleader squad because she had complained to her mom about the saucy language they had to use in one of the cheers: Our backs ache! / Our skirts are too tight! / We shake our booties! / From left to right! Cheerleading is supposed to be risqué these days . . . but this kid is 6. WXYZ-TV (Detroit)

You Knew It Was Just a Matter of Time: There's now marijuana ice-cream, in a Santa Cruz, Calif., shop (Rx required, of course) at $15 a half-pint, take-out only. KGBT-TV (Harlingen, Tex.)

They are calling him Lorenzo the lookout, a parrot trained to sound a warning when he sees police coming. He was a bit slow this time though as two drug trafficers and Lorenzo have been apprehended. Now he's a prison bird. (film clip at the link) 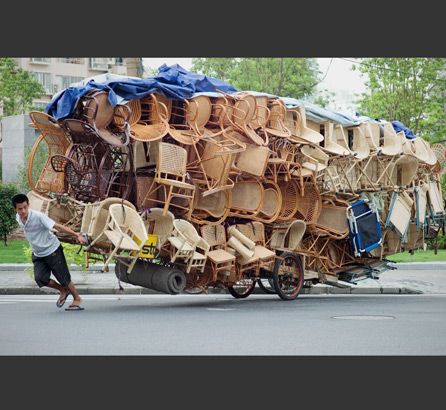 We could play "How many chairs?" or "Where's Waldo?"

Wait a second, in the top corner...