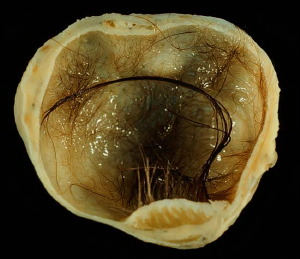 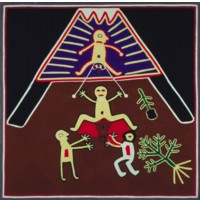 
Couvade syndrome is a medical/mental condition which "involves a father experiencing some of the behavior of his wife at near the time of childbirth, including her birth pains, postpartum seclusion, food restrictions, and sex taboos".
Another term for it is a sympathetic pregnancy. But some cultures take the concept a step further. From The Art of Folly by Paul Tabori:


In Brazil the new father is deliberately made ill. They use the sharp teeth of the aguti to gash his body. Then the wounds are washed with poisonously burning tobacco juice or a liquid in which black pepper has been mixed. The "father/mother" suffers duly while playing his strange role. In some other tribes he is subjected to a strict diet, not for days, but for weeks, during which he gets so little to eat that he becomes skin-and-bone. Among the Vaga-Vaga tribe, for instance, he is forbidden to eat bananas, coconuts, mangoes, sugar cane, poultry, pork, and dog meat.
No dog meat. That's rough. But my favorite Couvade ritual comes from the Huichol Indian tribe:


During traditional childbirth, the father sits above his labouring wife on the roof of their hut. Ropes are tied around his testicles and his wife holds onto the other ends. Each time she feels a painful contraction, she tugs on the ropes so that her husband will share some of the pain of their child's entrance into the world.
The thumbnail shows a yarn drawing owned by the Fine Arts Museum of San Francisco that depicts this ritual.

Could this commercial have been the inspiration for The Exorcist? 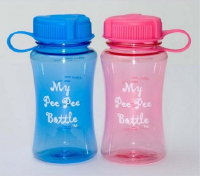 There are a number of reasons why "My Pee Pee Bottle" is a disturbing product. Reason #1: It looks WAY too much like a sippy cup. (Though there are some who say that urine drinking is healthy.)

Reason #2: The instructions (and accompanying picture) are too explicit for my sensibilities. Isn't it obvious how a Pee Pee Bottle works?

Whatever happened to finding a bush to go behind? 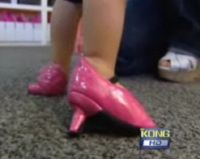 I've always thought it kind of disturbing when people dress up toddlers in makeup or faux earrings. I get the same creepy vibe from these Baby High Heels now being marketed by a company called Heelarious. The heels are made of foam, so there's no risk of them impaling the kid. Still, they don't exactly look comfortable.

This must appeal to the same set of people who enter their six-year-old daughters in child beauty pageants. Yahoo! News has a video of a kid wearing these things. What about Baby Foot Binding next?