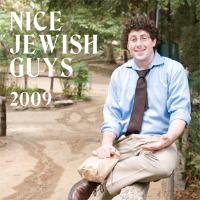 If you still need a calendar for 2009, consider the Nice Jewish Guys calendar, featuring twelve months of really nice guys.

There doesn't seem to be a companion Nice Jewish Girls calendar. The closest I could find was a calendar of Jewish girls published by Heeb Magazine for the Jewish year 5769. But it features the kind of girls that most nice Jewish guys don't have a prayer of ending up with.