Category:
Screams, Grunts and Other Exclamations

Spit On Me, Dickie!

Dickie Rock (born 1936) was an Irish singer whose career peaked in 1966 when he sang for Ireland in the Eurovision song contest. Wikipedia only has a brief article about him. However, the article includes this intriguing nugget of weirdness:


In 1966, he sang for Ireland in the 1966 Eurovision Song Contest with the song, "Come Back to Stay". He entered as a solo artist and finished fourth in the Contest. This song also became a number one hit in Ireland. Rock was the subject of a well-known Irish catchphrase—"spit on me Dickie", the origin of this being that rebellious young women in the 1960s wanted to be covered in his saliva in a manner similar to American women idolising the hips of Elvis. The phrase took off in Belfast in the 1960s and spread all over Ireland. 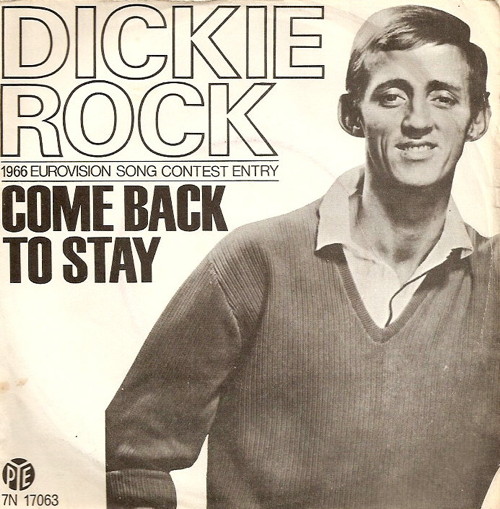 This raises the issue of spit fetishes. Dr. Mark Griffiths offers these observations about spit fetishes on his blog:

The online Urantia Book claims that (historically) saliva was a potent fetish. Apparently, "devils could be driven out by spitting on a person" and "for an elder or superior to spit on one was the highest compliment"...

Compared to all other paraphilic and fetishistic behaviours concerning sexual arousal to human bodily fluids, there is significantly less written about saliva and spitting fetishes. Whether academic and/or clinical research is needed is – at present – debatable.
So based on what Dr. Griffiths says, perhaps the desire of young women for Dickie to spit on them was related to their desire for him to ejaculate on them. It would make sense. Especially with a name like Dickie!

Here's Dickie singing "Come Back To Stay":
Update: The original video I posted got pulled from youtube, so here's another one -- a documentary about Dickie Rock: