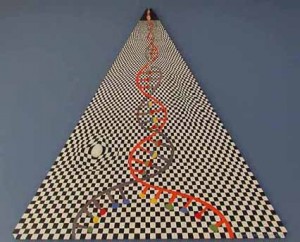 Pascal Henry, a Swiss motorcycle courier, had planned the trip of a lifetime. Over the course of 68 days he was going to eat at every three-star Michelin-rated restaurant in the world -- all 68 of them.

By June 12 he had reached #40 on his list, El Bulli in Spain. He had finished his dessert, but had not yet paid his bill, when he excused himself from his table to go outside to his car to get one of his business cards to give to the couple at the next table. He hasn't been seen since.

What happened to him? The most popular theory is that he must have run out of money and decided to go into hiding. But there's also the possibility he may have wandered off a nearby cliff (though no body has been found) or that foul play is involved. Supporting the theory that he went into hiding are "reports that he is divorced and deeply secretive and went missing for several months as a teenager." Links: Times Online, Independent.

The Chicago Tribune reports on a mysterious cryptogram received by Fermilab:


The enigma began last year when a plain envelope with no return address arrived at the world-famous physics laboratory outside Chicago, addressed simply to "Fermilab." Inside was a single sheet marked by pen with a bizarre series of hash marks, numbers and alien-looking symbols. No one at the lab could make sense of the letter. Was it a joke? A threat? A hint at some exotic new theory?
The lab eventually posted the puzzle on its website, and the online community within days had partially solved it. The first part says, "FRANK SHOEMAKER WOULD CALL THIS NOISE." (referring, apparently, to a physicist who used to work at Fermilab). The bottom part reads: "EMPLOYEE NUMBER BASSE SIXTEEN." The middle section remains unsolved.

Unfortunately, these messages are as cryptic as the code itself. If you like puzzles, see if you can be the one to shed light on this enigma.